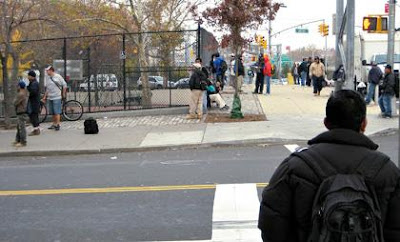 Tensions between neighbors, day laborers and a mobile soup kitchen appear to be on the wane at Woodside’s Hart Playground, where the city has begun taking measures to gently discourage adults from using the playground area while leaving them use of the on-site restrooms.

The issue reached Community Board 2 in October 2009, when Chairman Joseph Conley told board members that the day laborers, who gather at the playground because it is next to the on-ramp to the Brooklyn-Queens Expressway, were using the restrooms to do their laundry and were in the playground area where adults are not allowed without children.

“We’re expecting there should be some improvement on that soon,” said Conley at a meeting Feb. 4.

The city Parks Department has agreed to close one of the gates at the playground, which also abuts a busy subway stop, and to put up new signs.

“At the request of the local precinct, some of the civic groups and the community, we all agreed we will close this gate,” said Queens Parks Commissioner Dorothy Lewandowski, referring to the entrance by the subway station. “All the public has to come in on one location. ... It gives [better] control of playground.”

The new signs list the same parks regulations as before in Spanish and Chinese as well as English, Lewandowski said.

Other new signs can be found inside the men’s restroom, telling patrons the facilities are for public use and adults cannot sit or loiter inside.

“We’re trying to be as considerate as possible and let the men outside, if they’re unfortunate enough to not have found work yet, still use the bathroom,” Lewandowski said.
Posted by Queens Crapper at 12:06 AM

Funny how the policitans fall all over themselves to let the illegal immigrant know about tweeder programs, or how they need not worry about being deported.

Don't need any prompting there!

Funny thing. Notice how they are MIA in this issue.

Now the locals have to ask them about this - write letters to the press about this - and share their experiences with good ol Crappy.

Make sure we are polite. We don't want to hurt the illegals feelings. Why can't they park a police care in front of the park to deter them? Oh, I forgot. They're not afraid of the police. Too bad. Put one there anyway and if they urinate on the street, give them a ticket, just like legal citizens get. There are so many of them around the park -- can't the police get them for unlawful assembly? So tired of this. They are criminals. They should be treated as such.

It never amazes me that they bend over backwards for these people. I had to use a bathroom once before getting on the train and I thought I would have no problem using the 108th pct. bathroom. Being a U.S. citizen and tax payer, you would think there would'nt be a problem. But being a white female, I must've looked like a threat cause not only did they hesitate but they made me leave my back pack at the door. Funny how our public parks cater to these illeagals.... And not only that but I drove pass 69th off of Queens blvd. yesterday and as usual, they were all over the four block area. I saw someone dropping off someone, and when the SUV pulled over, the illeagals swarmed the SUV. I wish I owned a gun cause I would love to see their faces if I were to pull over and pull a gun out on them. Too bad it is illeagal to kill them.

Gently? They climbed walls, crawled through tunnels and shimmied under fences breaching security to enter the USA illegally. Arrest these people, imprison them and their immediate family if any and deport them quickly to their country of origin. Bill their embassy or consulate for all expenses. Repeat offenders must be given incentives such as mandatory Federal Penitentiary sentence of 3 years hard labor. And - their families living here with children born here will never be eligible ever for residency or citizenship.

Have these folks piss in their own country - stop pissing on us already!

It's funny how day laborers/illegals have a free pass to loiter but my children and his friends are hangingout in front of our building and get harassed and pulled over by the cops while they play handball.

It seems these people have immunity from the cops and American citizens get harassed if there are black people present.

Yep, that's about the size of it. Welcome to America.

"Why can't they park a police care [sic] in front of the building to deter them? Oh, I forgot. They're not afraid of the police."

Two weeks ago, at 8 in the morning I was driving west on Broadway in Astoria, passing the Tsigonia Paint Store on 39th Street, a day laborer hang-out, across from the Broadway Library. A police car, with flashing red lights, pulled over a driver to give him a ticket for something. This police car was parked right in front of about 50 day laborers. The motorist got his summons while the day laborers milled around and watched. The police car, after ticketing the motorist, left.

Whenever I see vast amounts of day laborers, such as depicted in the post's photo on 69th Street and Broadway, I call 911 - not 311. It is your civic duty to do so.

"Lay off the cop, he was doing his job."

at least he has a job, lots of us don't, thanks to the illegals who work for lower wages. How is this helping anyone?

something is really wrong when illegal immigrants are handled with kid gloves. There are two laws now, one for American citizens and another for illegal immigrants. Who is lobbying in Congress for us? the illegal immigrants have paid lobbyists in our government. Do we have Emerald Isle Immigration Center to thank? there is definitely an Anti-American attitude there.

I will pay someone $50 Bucks to go to George's aforementioned street corner for me and get some Pre-Paid Celly numbers for me...
I am thinking about opening up a lettuce stand or hot-mop roofing business this summer...
THX...I am all the way out in CT...

Wait until they bankrupt this country and there is no one to pay for their benefits. They'll all go home once their funding dries up. Why can't we just cut off their services? Where are the local elected politicians in this area? Do they care to comment on this mess? Will they stand up for their constituents, or will they just coddle the criminals?

This police car was parked right in front of about 50 day laborers. The motorist got his summons while the day laborers milled around and watched. The police car, after ticketing the motorist, left.

I have seen the above before too - funny I didn't think of it in the same way but the writer is correct - how ironic that citizen drivers are being targeted for nothing infractions to raise fund for the City while 50 illegals who are busily and expertly good at getting fed, treated at our local hospitals, and live all for free including legal help!!

What's wrong with this? Enough is enough - get on your local NYPD to complain about infractions (they need to do their job including the Feds) and local POS should not waste one minute defending or providing benefits to illegals!!

Sigh. OK, one more time, for those in the back; THE POLICE CAN NOT AND WILL NOT DO ANYTHING ABOUT THE DAY LABORERS UNLESS WE GET ON THE POLITICIANS, YES, THE POLITICIANS, TO UNTIE THE HANDS OF THE POLICE, AND ALLOW THEM TO GO AFTER THE DAY LABORERS WITH FULL VIGOR.
The cops really want to go after these lawbreakers. Believe me, they REALLY REALLY want to go after them. But they are ordered, warned and even threatened by the legislature and the civil rights groups, to lay off. Any action taken against the day laborers, and the cop who is responsible will be thrown under the bus by the department and the city, and would be fed to the sharks. Get the lawmakers to change their policies, and the law ENFORCERS will be more than happy to bring these clowns to justice.

I suppose our children will never need to use this bathroom.

While the above is very true, it does not seem to work, we struggled with this for years and years in Flushing and we did not win. I guess our votes don't count and our campaign $ isn't enough.

Sanctuary State thats what NY is!!! I'm tired of this crap I have a GREAT IDEA "CLOSE THE FRIGGIN BOARDERS!!!! NO MORE ILLEGALS I could give a rats ass in hell how we get them out just get them out!! MY DRIVEWAY IS NOT A PUBLIC TOILET!!! You none English speaking pieces of crap you don't love my Country you just come here to use her for all shes worth!!!!!

Gosh I thought this was a blog about Tweeding. You know, how the rich folks come in and build high rises for the hipsters breeding into middle age?

Tell me again why you're wasting time on the same old tired anti immigrant crap when it's the Queens character---CREATED BY YOUR IMMIGRANT PARENTS AND GRANDPARENTS-- that you're supposedly trying to preserve?

You seem not to understand the definition of tweeding. Immigrants are a central part of the process.