When will we finally bury Queen Catherine? 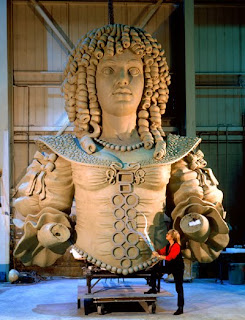 From the Queens Chronicle's trivia contest:

1. What year did the U.S. Open move from Forest Hills to Flushing Meadows Park?

3. Who is the borough of Queens named after?

Okay. 1 and 2 are easy. But 3 is a trick question. What they probably want you to say is that Queen Catherine of Braganza is the person after whom Queens is named. But that would disqualify you. Why? Let's consult an expert. From the NY Times:

"I never really understood the Catherine-Queens connection," he said. "She probably didn't even know Queens existed."

Catherine was no ordinary royal: married to King Charles II of England, she was a Portuguese princess whose family benefited from the slave trade and persecuted Jews in Europe. The borough was supposedly named for her.

Behind the planned removal [of her portrait from borough hall] is a widespread, if contested, belief that Brooklyn, or Kings County, is named for Charles II and that Catherine, his wife, served the same role for Queens. Historians say these stories are unproven, but many residents of Queens say that, regardless, Catherine should not be a symbol of a borough that bubbles with cultural diversity.

Although some have claimed that Queens, a borough of New York City, was named after Catherine of Braganza, her name is not mentioned in the first 200 years of historical documents that have been preserved in the county archives. She was, however, queen when Queens County was established, alongside Kings County (Brooklyn) in 1683.

The entire Queen Catherine movement was nothing more than a Claire Shulman tweeding effort. Sadly, they are teaching this shit to kids in school (see p. 92).

Make sure that when you enter the contest, you put the right answer!
Posted by Queens Crapper at 12:28 AM

I don't know about past history, but Queens should be named after El Exigente (the mexican coffee guy with the burro/borough).

I'll go with the above as everyone else here attests to. Also, get rid of the ugly statue of Kathrine - is is a pretender is all. Shame on Shulman for concocting this stuff and wasting our image which is troubled enough.

Shame on Marshall but letting this slave mistress on the offical boro website!

Happy black history month to you!

This reflects the attitude that the borough's leadership has towards you - if they concede even something this trival, who knows where it will lead?

Considering the entire structure rests on false assumptions, and a very strict policy of keeping everyone in the dark on what is really going on, you can dig up the Queen herself and drag her before 'tha bhoys' - she would be ignored like the rest of us.

NO! Considering that a new tweeded population of Brazilians are growing in Astoria, and considering how f*cked up that community is (quite the distinction when you can say that about almost any community in Queens) she will be back - I think the plan was a 5 story statue that (with the base) will be almost as tall as the Statue of Liberty.

If the blacks object, Claire suggested a statue of Sojurner Truth next to it.

Only thing that would stop it would be Manhattan residents pissed they have to face an eyesore, cause we know the polite doormats of Queens will bleat some excuse of impotence.

I think she got a free trip to Portugal through Manuel e Sousa, executive director of The Friends Of Queen Catherine.

Anyway, after foiling the Port Authority and examining some documents years back....I spotted a photo of that bovine bitch Queen Claire which looked like it was taken in Lisbon or someplace.

Sorry I couldn't read Portuguese to clarify this.

Sousa was pulling down about 250 Gs a year for doing what?


Looks like he was just a well connected ponce from Provincetown.

FYI:
That statue was never completed.

You are certainly no sculptress!

When I first met Helen Marshal I though she was just an old Jewish yenta with that teased to the sky bird's nest hairdo of hers..

I'm blacker than she is after a few hours in the summer sun.

That statue was never completed.

dont kid yourself...no one has seen it crushed.

sssshhhheeeiillll be back!
trust me.

Did I miss something, or was there no mention of that giant statue in the posting? That statue is more interesting than the bo-ring story.