Woodside triangle may be doomed 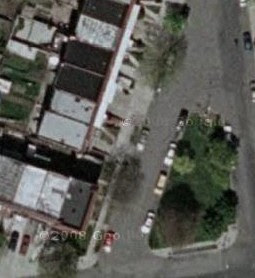 An odd island at the convergence of three streets known as the Woodside Triangle may soon end five decades as a de facto park and become another home unless activists in the neighborhood can raise the cash to buy it from the developer.

The 1,265-square-foot lot at the junction of 34th Avenue and 59th and 60th streets has been used by residents as a park since 1959, when Mayor Robert Wagner planted a tree there. Now the owner is poised to begin construction.

At the time the land was owned by a Carvel’s establishment across the street. But when the Carvel’s went under, the triangle changed hands a number of times before ending up with Sano Construction, which first applied to build a two-story home there in 2004.

About two dozen protesters and City Council candidates Brent O’Leary, David Rosasco and Jimmy Van Bramer booed a Sano dump truck as it rattled past the corner Tuesday afternoon. The driver briefly looked down at the crowd and shook his head.

“All of a sudden they put up a chain link fence and we got nervous,” said resident Marion Molno, who has led the effort to stop the development of the triangle starting with an appearance at Community Board 2 in March 2008.

She said neighbors contested the property owner’s application at the city Board of Standards and Appeals, but the agency ultimately granted the variance to make a home on the irregular lot.

The Village Voice pointed out that there is another three-sided property nearby that is actually a city park. But according to commenter Kate: The other three sided property you refer to is full of homeless men who sometime do not wear clothes. It is not a suitable place for children to play and it hasn't been for years.
Posted by Queens Crapper at 12:21 AM

taking away votes from Tony A (planned development you know), and in the pocket of developers and the mayor by accident or design.

"de-facto" park? on private proerty? sounds like tresspassing to me.

This reminds me of a traffic triangle in my neighborhood, at Aguilar Avenue and Parsons Boulevard.

Empty for decades, it was even given an honorific by the city- Irving Newman Circle, after a local civic activist who died in 1989. Many people assumed it was an undeveloped public park.

Unfortunately, about four years ago, a developer built a two-story crap box on the triangle.

Don't take any empty lot for granted. Protect it, before it gets developed!

the owner should have the right to develop it

Too bad, but consider it a done deal. We had one in Glen Oaks tha some idiot built a weird shaped house on. C'est la vie.

Protect it, before it gets developed!


Yes! You should squat in it!

Another one of these, known as Vincent Daniels Square by the 52nd street station on the #7 line, is becoming overrun with rats. It hasn't had grass cut in some time. Hedges around the entire perimeter are overgrown.

Upon calling 311, it appeared they had no record of this park's existence! They took the complaint anyway. This park has been there since at least the late 1960s/early 1970s and probably even longer than that.

An e-mail sent a week ago to Gioia's office has not been acknowledge.

Perhaps this chunk of land is also on the chopping block?

A house in the middle of a roadway? What's next Queens Blvd?
We have had cars crash into houses situated on corners. A house there could get four cars from four directions. Tired of the kids? Sure be easy to tell them to "go out play in the traffic".

Anonymous said...
Another one of these, known as Vincent Daniels Square by the 52nd street station on the #7 line, is becoming overrun with rats. It hasn't had grass cut in some time. Hedges around the entire perimeter are overgrown.

Upon calling 311, it appeared they had no record of this park's existence! They took the complaint anyway. This park has been there since at least the late 1960s/early 1970s and probably even longer than that.

An e-mail sent a week ago to Gioia's office has not been acknowledge.

Perhaps this chunk of land is also on the chopping block?

That area is overrun with rats because the old ladies in the area insist on dumping tons of birdseed there.

I still find it odd how city officials honorifically name a "square," not knowing that the empty square or triangle is privately-owned land.

Missing Foundation is perhaps the most appropriate screen name (both as in hiding and computer screen) on this blog.

As a biker, I knew of this place as a dog run because one of the safest east-west routes available is the 34th Ave. bike lane and I love animals (and GREATLY admire Tony's commitment to humane treatment of other species). I'm sure community gardeners would love to plant on that space. As for waterfront people -- isn't it a bit of a stretch to demand that they get involved so far inland? Or is your comment directly related to the storm surge post cautioning us that Woodside might find itself on a waterfront during a decent hurricane?

Bikers, gardeners, and boaters all do tend to care more about the environment than the average person. But that activism and advocacy benefits all with lower cancer rates, fewer cases of childhood asthma, better transportation, a new wave of green collar jobs, etc.

What do you try to do? What labors have you put into improving quality of life for all Queens residents?

PS: Property rights do reign. But groups like Trust for Public Land, for example, try to promote community good by buying that land at a fair price without resorting to eminent domain abuses.

Neighbors should also look into a pool purchase -- a green space coop of sorts. All of the real estate surrounding the property would grow in value if it was secured as an attractive, well-maintained park. Enlightened self-interest, anyone? Or will this be another case of "the tragedy of the commons?"