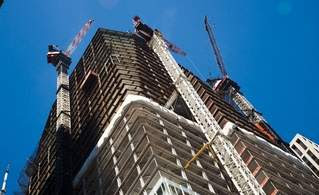 Construction costs in the New York City area have recorded their first major declines since the early 1990s, according to the New York Building Congress on Wednesday.

For the construction of office and bank buildings, costs for everything from materials to labor dropped 10% from last year, according to a Building Congress analysis of FW Dodge data. Similarly, apartment construction costs are down 9% this year from last, and costs for construction of schools and libraries, as well as hotels and motels, are off by 8%.

Governments, which still have money to spend on new schools and other projects, will benefit most from the cheaper cost.

In contrast, the lower costs will have little impact on private developers. Construction costs are a small portion of the overall price to build a residential or office building, Mr. Anderson said. He adds that a 10% drop is probably not enough to make up for other factors like the lack of financing.

You can be sure that the City will still find a way to waste money on it, though.
Posted by Queens Crapper at 1:56 AM

I don't doubt this, yet when I take the train through Queens, all I see is half built, boarded up crap, covered in grafitti. So even though construction costs have dropped; these builders still cannot finish their crap.

Thanks for such an informative article.I think that the recession has affected the construction industry very badly and there has to be some improvement in the construction costs or the situation will get worse.