Vibrant and diverse Corona is a dump 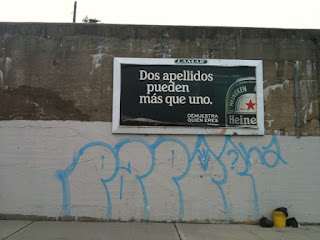 Hispanic Corona demographics are changing rapidly. Traditionally an Italian, Colombian and Dominican neighborhood, it now hosts large communities of Ecuadoreans, Mexicans, and Guatemalans. “La Chola”, “Antojitos Colombianos Bakery” and other signs in Spanish set the scene. It smells like tacos and rubbish, depending on what street you’re on.

Despite the economic downturn and the lack of jobs, more undocumented immigrants keep on coming to Corona. Some neighbors complain the place is getting too crowded. As many as several families living in a small apartment, Father Villegas of St. Leo Church said. Some others complain because crime rates are increasing, and the hood is not the safe place it used to be.

“Close to the subway in Roosevelt there are drug traffickers, and men selling illegal green cards during the day and naked women during the night,” ex-resident Josefina Joniaux said. Her auto insurance shop was robbed some years ago, as was the nearby Bravo Supermarket, just four months back.

...many Corona residents have packed and moved somewhere else, but return here for jobs that tie them to their old neighborhood. A sort of an exodus at a time of a constant influx of newcomers. “More than 90% of the population is undocumented here. We don’t have enough resources, there’s a lot of work to do with this community,” Villegas said.

What an honest assessment of Corona!

One thing's for sure: Almudena Toral will never make it as a Queens weekly reporter...
Posted by Queens Crapper at 1:58 AM

And I'll bet that these "90% of undocumented" Corona residents are using the services of the already severely overburdened nearby Elmhurst Hospital for every everything under the sun.

FYI:
I have absolutely nothing against emergency or critical health care being provided for the needy whatever their status because no single human being should ever be caused to suffer by denying them medical services.

As Lincoln once said, "Malice towards none and charity for all".
Exactly my sentiments!

But I love (ha, ha) paying taxes so that legions of illegal aliens can get a battery of free services when I can't afford enough medical coverage to secure adequate protection for my own family who have been fully documented American citizens living in the USA since 1908!

I couldn't possibly add a single thing to that brutally honest and scathingly accurate assessment of present-day Corona. When will the politicians and the multicultural fanatics in this city and this country finally wake up and see the destruction their failed and delusional policies are raining down on us!

Vote out all politicians that encourage illegal immigration and don't enforce our immigration laws. Send a message to Washington that we want our country back. Cut services to these illegals and they will leave. Send them home and secure our borders so that illegals and terrorists can't get it.

They will not WAKE UP until you ACT UP!

Everyone knows what is going on, and everyone knows, like how you left Tony twisting in the wind, you will 'wish' and 'hope' things will change but do nothing besides whining to make it happen.

It smells like tacos and rubbish, depending on what street you’re on.

USING TACOS AND RUBBISH IN ONE SENTENCE?!?! AH OH, IS THIS OZ THAT CLAIRE AND VICKY AND 'HONEST JOE' IS PAINTING BECOMING UNGLUDED?

Despite the economic downturn and the lack of jobs, more undocumented immigrants keep on coming to Corona.

CAN'T BE TRUE. EVERY PUBLICATION IS TELLING US THAT BECAUSE THINGS ARE NOT GOOD, THE IMMIGRANTS HAVE STOPPED COMING.

OF COURSE OUR EYES DON'T SEE IT, BUT LIKE TERM LIMITS, WHAT WE SEE AND DO DOESNT MAKE THE RADAR.

Some neighbors complain the place is getting too crowded.

GO TO ASTORIA. THEY WANT THE KIDS GOING TO THEIR SCHOOLS TO COME FROM THEIR SLUMS NOT FROM NEIGHBORING SLUMS.

As many as several families living in a small apartment, Father Villegas of St. Leo Church said.

AND OF COURSE THE CHURCH IS ONE OF THE BIG VOICES ON MORE DEVELOPMENT FOR HUGE COMMUNITY DESTROYING MEGAPROJECTS.

Some others complain because crime rates are increasing, and the hood is not the safe place it used to be.

ITS CALLED 'VIBRANT' AND 'DIVERSE' HONEY.

One of the reasons Bayside rejected becoming Corona East.

this is nothing new

corona near roosevelt has been a cesspool forever

this is not news

this is nothing new

corona near roosevelt has been a cesspool forever

this is not news

---
well, not forever, old mansions were still around 100 years ago.

what is new is that people are admitting that offical bullshit is well bullshit.

Finally a journalist who's not brainwashed by multicultural sensitivity and political correctness! Thanks for this honest account of what a dump Corona is!

Lol.. tacos and rubbish in one sentence. This sums up my feelings about Corona. I see now a taco truck has moved into the corner of my block. How do I get rid of it????