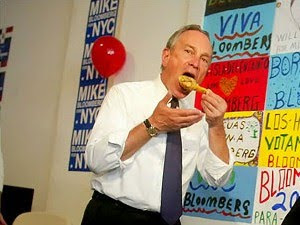 The NY Times has a photo gallery of Bloomturd stuffing his face. An accompanying article delves into his hypocrisy over what he eats vs. what he preaches:

Mayor Michael R. Bloomberg has become New York City’s nutritional nag, banning the use of trans fats, forcing chain restaurants to post calorie counts and exhorting diners to consume less salt. Now he is at it again, directing his wrath at sugary drinks in a new series of arresting advertisements that ask subway riders: “Are you pouring on the pounds?”

But an examination of what enters the mayoral mouth reveals that Mr. Bloomberg is an omnivore with his own glaring indulgences, many of them at odds with his own policies. And he struggles mightily to restrain his appetite.

As a billionaire in one of the dining capitals of the world, he can eat anything he wants. But he is obsessed with his weight — so much so that the sight of an unflattering photo of himself can trigger weeks of intense dieting and crankiness, according to friends and aides.
Posted by Queens Crapper at 12:00 PM

"he is obsessed with his weight — so much so that the sight of an unflattering photo of himself can trigger weeks of intense dieting and crankiness, according to friends and aides."

What a friggin' teen girly-boy sissy!

That closet queen's just going through his monthly PMS.

Walt Disney forbade anyone working for him to have facial hair...mustache or beard.