Another welfare program for developers 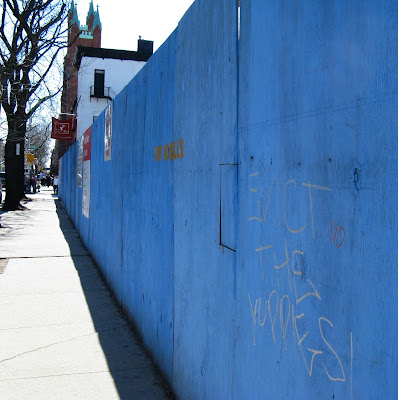 Stalled condo projects and big blue “death fences” may be the order of the day throughout Brooklyn, but that doesn’t mean a community’s quality of life has to suffer.

The City Council is hammering out new legislation that would make it worth a developer’s while to better secure their half-completed projects.

If passed, developers feeling the financial pinch can enroll in a special program run by the city’s Department of Buildings, where all of their permits would be continued if they agree to maintain the safety of their construction sites.

According to current law, construction permits immediately expire if work on the site is suspended for more than 12 months. When they want to begin work again, they have to jump through a series of city hoops to acquire the permits they already had, officials said.

To be approved for the new program, one would have to “notify [the Department of Buildings] when permitted work would be suspended and when it will resume” as well as “submit a detailed plan for the Commissioner’s approval specifying how the safety of the construction site will be maintained while work is suspended or delayed.”

If a developer deviates in any way from their plan, their permits would be immediately rescinded.

And who is going to enforce this if they do deviate from the plan? Will the public get to see the plan? Sounds like yet another welfare program for developers. They may be feeling the pinch, but so is the city. Why are developers getting breaks but Joe Citizen is being forced to open up his wallet more often?

Photo from Pardon Me for Asking
Posted by Queens Crapper at 1:22 AM