Is the WFP the 21st Century's Tammany Hall? 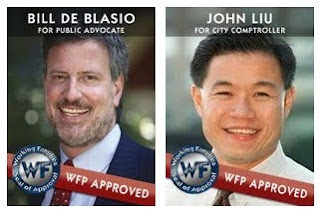 The City's divided Democratic Party leaders can't elect citywide candidates. It was the power of the paid operation of the WFP and voters turn off by the entire election system that won the day. It is shocking that in a Democrat runoff Liu received 127,173 or just 4% of the registered Democrats in the city (3,177,740). De Blasio did a little better wtih 138, 736, he got 4.4% of the city's democratic voters. Just 2.7% of all the city's registered voters (4,657,516) . . . Liu political consultant and lobbyist Bill Lynch has more power over Liu than consultant lobbyist Hank Morris ever had over former city and state comptroller Alan Hevesi. How will Lynch's complete victories effect the state and city's lobby consultant business. Wayne Barrett of the Village Voice on NY1 questioned last night how Liu elected by the unions will be able to audit and offer the transparency needed of the union pension funds and millions in health care programs they run with city funds.

WFP Could Now Be the Most Power Party Since Tammany Hall
Earlier this month, the WFP the 11,800 member party backed four of the five challengers who ousted incumbents in the City Council. The WFP's ability to pull out the vote for its selected candidates increases that clout considerably, raising the question of how many elected officials are going to be willing to take on. At a meeting of the partnership and Citizen Budget Commission Steven Berger said The only people legislators listen to is the Working Families Party. Both Tammany Hall and WFP gained their power by organizing and providing for the poor.
Posted by Queens Crapper at 10:00 AM

If yes, then vote for De Blasio and/or Liu, or any other candidate with any connection at all to the so-called WFP.

You think ACORN is just some bunch of harmless "activists"?

Look at Chicago. Look at all their voter fraud indictments. Look at how they promote prostitution and pedophilia out in the open! And then say hello to the tsunami of openly defiant illegal aliens, here to destroy the jobs of the Working Families.

ACORN and WFP have no real interest in families, unions or working people. They are single-mindedly interested in corruption, plain and simple.

Put ACORN or WFP people in office, and say good-bye to your tax payments.

So we finally have a third party that rivals the established Democratic clubhouse in clout and power.

You may disagree with the WFP, but give them props for succeeding where so many third parties failed before.

If the Conservative Party had been as strong as the WFP, that RINO Bloomberg wouldn't be able to buy off the GOP.

Anonymous said:
"If the Conservative Party had been as strong as the WFP, that RINO Bloomberg wouldn't be able to buy off the GOP."

The Conservative party actually operates on principles. ACORN and the WFP operate on corruption.

There's no money in principles. There's plenty of money in corruption.

The Conservative party wants good, clean government. ACORN and WFP thrive in the stench of corruption.

The electorate watches Housewives and wrestling.

Bah....WFP is where all of the old "pinkos" took refuge!

Who did the "Daily Worker" endorse (if it's still publishing)?

It was a swell "Chinese fire drill" and Liu, of course, won.

He ran a 360 degree circle around his car at the stoplight but he should have bused the voters to the polls.

There was no voter fraud here...just voter apathy.

Now all of you sloths can pay the piper his due!

Wasn't it Nathaniel Green that burst in on a party of drunken, sleeping Hessian mercenaries on X-mas eve taking (wasn't it) Fort Ticonderoga, "In the name of the great Jehovah and the Continental congress"?

America had best learn to sleep with their eyes and ears open.

Somebody out there is ready and waiting to take from us what we ourselves have taken for granted.

Salutations to your candidate Liu
for his victory over the lazy Americans!

And New york is supposed to be a tough city?

I just enrolled in a Mandarin language class.

I then asked her if she voted in the primary.

She replied, "When was it"?

I answered, Then YOU ARE the problem"!

Why don't we just get rid of the corrupt political parties and have non partison elections?

" "taxpayer" said: The Conservative party actually operates on principles. ACORN and the WFP operate on corruption."

1)Taking money from the landlord/R.E. industry to undermine protections for residents.

2) Taking money from business to weaken regulations that protect consumers.

3) Generally screwing the people that foolishly vote for them and hiding behind a facade of patriotism and "family values".

The parties should pay for their primaries, not the public.