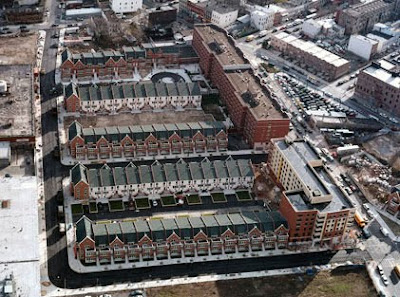 A mini-city is brewing at an old beer factory in Bushwick.

Developer Read Property Group is asking the city to approve the building of 947 apartments and townhouses where the Rheingold Brewery once stood.

The site is just blocks away from the proposed "Broadway Triangle" project. If both developments win approval, it would pave the way for an additional 2,842 homes in the hardscrabble neighborhood that has seen a revitalization in recent years.

Some critics doubt all the units will sell, given the housing glut, and complain the city is adding too many residents without expanding services.

Yeah...you noticed that's how Bloomberg does things, too, huh? More brownfields for brown skins with stairways to heaven. Yippee!
Posted by Queens Crapper at 1:10 AM

Do they really think people want to live in that shithole? They may rent,but they won't buy........

That photo is very distorted, that property is 1 square block.
They want to put 947 units and no parking ?
I grew up in Bushwick my grandparents live on George St down the block from the brewery.
They had taps and a table with hotdogs outside down this alley.
You could get Fresh free beer at 12 noon if you had a Reingold mug.
I still have an original Reingold clock, colored mugs with the tweed inside and some metal serving trays

Those that live in huts and railroad cars will --7+ to a room no problem.
They will sit at the curd drinking beer 9AM hooting at your wife (with your tax dollars) as she go's to work with your tax $$$ !!!

PS145 will have classrooms of 70 on the roof and in boiler rooms in no time. The mayor will make sure every working middle class he cant buy is beaten like a big Pinata at every level.

Another words get with his program or GTF out of his city.
This mayor is using te tweeds to exterminate anbody that gets in his way then make Queens one big camp of slaves and tweed that think hes and his hack puppets are god.

about as charming as 19th century workers housing in briton.

will take a gang about a year to take it over.

i predict within a generation they will bulldoze it.

Maybe they will regularly go over to Pratt to prey on punks that write odes to developers under the guize of eduction.