Developer wants to brick up 10 windows 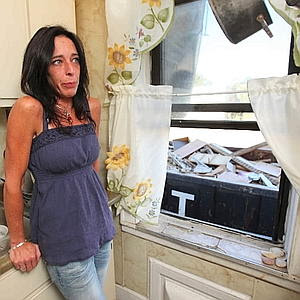 A Queens landlord wants to leave a longtime tenant and her family in the dark by sealing up nine of their 10 windows and building an apartment tower next door, court papers reveal.

Santino DiFiore got a permit from the city's Buildings Department to remove the windows from the north side of his four-story building at 20-24 31st St. in Astoria so he could build the six-story DiFiore Tower.

His grand plans, however, have been stalled by a stop-work order issued yesterday after a phone call from The Post.

The work would have left hairdresser JoAnn McGurty Sullivan, 42 -- whose parents lived in the rent-controlled, ground-floor, two-bedroom apartment before she was born -- with only one window to share with her husband, bus driver Jeremiah Sullivan, and their teen son, Daulton.

The other units on that side of the building are already vacant.

"The project's architect, Gerard Caliendo, failed to disclose that the building is occupied by rent-regulated units. As a result the DOB is auditing the application, issuing a stop-work order to the project and launching an immediate investigation," spokesman Tony Sclafani said.
Posted by Queens Crapper at 1:30 AM

I was over that way yesterday and was stopped in traffic and saw that. I said to myself, "all those windows are gonna be blocked off"... Wow that's messed up.

Really, we had a tenant bricked into her home on 18th Street in Astoria. After he or she fled in terror, another window made of glass blocks was cut into the north side of the building.


What a deal! A row of South Exposure windows replaced by a set of glass blocks on the North side. Progress!

Are those Malba Mc Mansion commissions running dry for you?

Between "cappo di cazzo" Caliendo and Bobby "the hairpiece" Scarano...that duo's become a regular blight on the landscape.

Caliendo is on CB1, the community board from hell.

Shit like this caused the folks in Bayside to boot out the Vallone$ from any position of authority.

Astoria, like neigbhoring Dutch Kills and Long Island City, are poster children for poor planning and communities on the brink of disaster (yes, you read that right, LIC is on the list too)

Well, you have newspapers, you have civics (UCCA, Greek American Homeowners, LICA). You have communtiy boards, you are in the process of rezoning (snicker snicker)

Or you just going to stand their and wring your hands and 'hope' and 'wish.'

"WHAT ARE YOU GOING TO DO ABOUT IT?" BOSS TWEED

Once again we have the Commissar's own DOB, refusing to examine the architect's application (self-certification, again) versus the facts presented to it.

Money is money, you know. Never piss off the Commissar when he wants his payments.

Read
http://www.theholidayspot.com/valentine/stories/salim_anarkali.htm. A love story about
Salim and Anarkali and the emperor's (Commissar's) punishment of the commoner by bricking her behind a wall. Nothing changes when the stupendously wealthy rule.

Dump the Commissar. We get control. He loses control.

Christ, there is that loser word again, HOPE

Maybe if you knew the whole story you would think differently. I looked into this and he is opening another 2 windows, totaling 3 windows in the apartment,but the post failed to include that into the story. Why should someone who is paying well below fair market rent like the rest of us pay try to stop someone from building? I think she is just trying to extort money.

I live in this building. Let me clear things up for you. Joanne and her husband own two cars. They also let a man, who was in his early 90's and has recently died, sweep up there trash, hose down their sidewalks and do their landscaping while they did nothing. (Now, his widowed wife looks into a courtyard overgrown with weeds.) JoAnne wears nice clothes and is sending her child to college. She is healthy as is her husband and perfectly capable of paying market value.
The landlord for years only mopped the hallway once a month. The fire exits are blocked with mattresses, trash and other filth that are cleared off regularly by two tenants rather than the super. The fire escape is also littered with trash that is often cleared off by the other two tenants as well. The dogs in this section often urinate in the hallway and poop on the sidewalk. The two tenants, though they have no dog mop up the urine as well because the super won't. When they tell the landlord he says, "Why do care about other people's trash and other people's dogs?" The two tenants that do all of this and pay full price for their unit. They can't afford a car because they pay for health insurance that is sky rocketing during a recession that that was caused by greedy people trying to get rich by taking the fast track just like JoAnne and her husband with the law suit they just won against the lazy irresponsible landlord. The two people that pick up the slack for the lazy landlord and the two extortionists, work seven days a week and were born in this country while the rent control tenants and the Italian born landlord take weekend trips to the beach. Now, this give me something for nothing mentality is distroying what should be the "seven day a week hard working tenants" American dream. I ask you, If JoAnne and her husband really cared about their enviroment so much wouldn't they have helped take care of it rather than stepping over trash and dog poop. Wouldn't they have helped the old man?They had the money and the time.
Also, shouldn't the landlord be required to live by American laws and standords when he is using our system to earn profit?
Greed, Greed, Greed. Shame, Shame Shame. Take a lesson from the old man that played baseball with sweep potatos during the depression and died while trying to do the right thing. Work hard. Take care of yourself. Don't expect others to do for you what you can do for yourself because the world doesn't owe you anything. Have some dignity and self respect and try to care about something other than yourself every once in a while. Don't let the temptation of easy money steal your soul because life is short even when you die at 90. If you are blessed enough to have money and power, try to leave a legacy of action that will make your children and grandchildren proud.