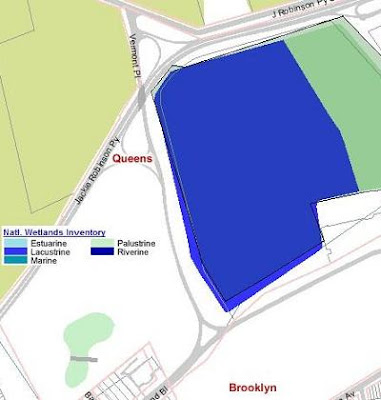 The Ridgewood Reservoir has been written about a lot lately, and one of the reasons it is important is because it is a marsh listed on the National Wetlands Inventory. However, there is another site outside the reservoir but within Highland Park that is also on the inventory. The feds classify this site as "palustrine", meaning it is a non-tidal wetland dominated by trees and shrubs. 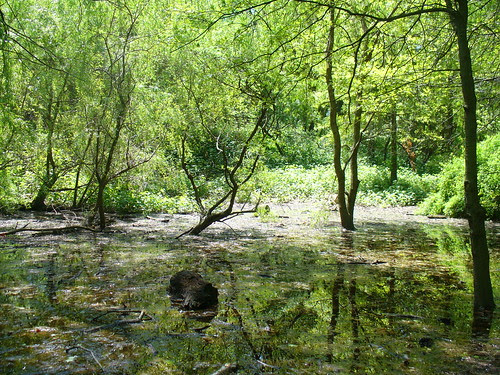 And here we have a shot of that wetland, located in the vicinity of the stone bridge, south of the picnic tables and parking lot. This area is known as the "ravine". 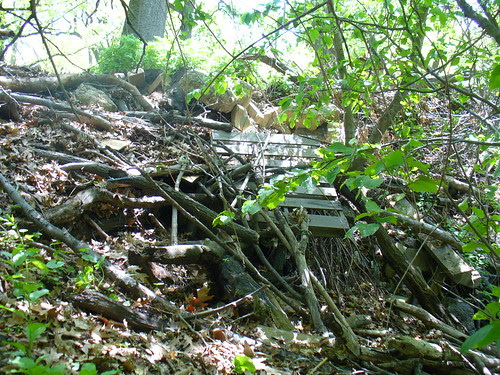 This is a serene scene, but if you look away from the water, you start to find a major pile of garbage. 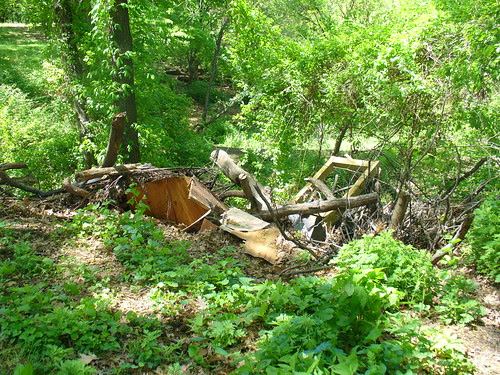 How could the Parks Dept allow this condition to exist? Local residents claim they have observed Parks Dept contractors and workers doing the dumping on a regular basis! 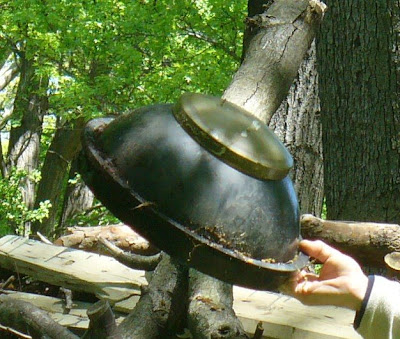 Think this is farfetched? The items in the debris indicate that they come from the agency. For example, this is the top of a park lamppost. 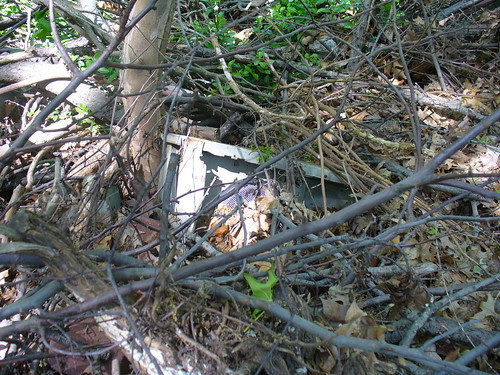 The Queens Parks Commissioner, who achieved her status by illegally leapfrogging over a more qualified black candidate, must feel that this is a great hiding place for garbage. After all, this park serves mainly minority communities in Queens and Brooklyn, so that makes it a natural place to jettison unwanted crap, such as this air conditioner... 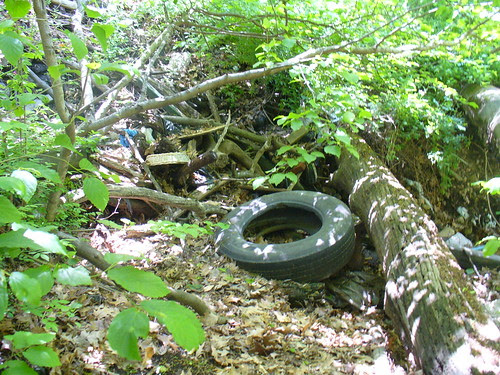 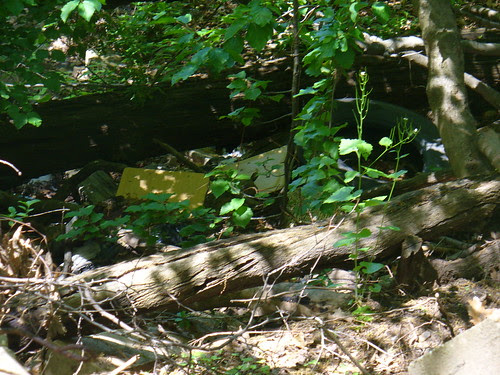 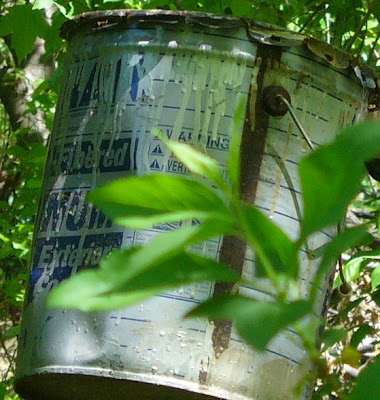 and toxic chemicals! Let's remember that this is part of the Jamaica Bay Watershed, and whatever seeps into the ground here ends up in the bay. Let's also remember that this is one of the parks that PlaNYC 2030 dubbed a "destination park". Right now, it's a destination for trash. Whether the Parks Dept is the one responsible for putting it there, I can't say in all certainty. But they are responsible for removing it.

Dottie: Time to clean up your act and our park. Please do so before the end of American Wetlands Month.
Posted by Queens Crapper at 12:00 AM

Maybe they can arrange to dump
Adrian & Dottie there too!

You see, you are not marketing this area to developers like Green Shores NY is helping the developers focus attention on the LIC waterfront (what DID happen to Astoria in their name - ashamed to be associated with Archie Bunker?)

They sponser clean ups and all sorts of buzz (but good God, no talk of expanding public parks) for the East River waterfront.

Take a page from them. Talk about some housing for the park and you might even see a GREENWAY put in!

I was going to say that Lewandowski could remove this toxic waste by removing herself from the city payroll.

Get off our back girl!

But, Verdi wins first prize from me. He (she?) put it much better.

Maybe the pair could hold hands and jump (or be pushed) into the toxins. (What a preciously romantic sight!)

Then we could discover which was more toxic to our parks: this pair or the stuff that was thrown there by Parks Dept.

"Talk about some housing for the park and you might even see a GREENWAY put in!"

I have the belief that this is going to be made into a "destination park" in order to help gentrify the Brooklyn neighborhoods along the J train. They already had put a greeway in...and you should see its condition.

I think I am going to call DOI on this Lewandowski woman. How can she authorize this? Terrible.

The parks department sent in an army of maintenance workers who spent the last 2 days cleaning up the park and reservoir paths. Did they do it because it was part of their regularly scheduled clean up? No, they did it to impress state Assemblyman Darryl C. Towns, who toured the area today. I guess the Queens Crapper got their attention, because the lamp cover, air conditioner, computer monitor, asphalt patch can and other "non-organic" material had been pulled from the pile of junk at the wetland.