Crowley and Como get their wish 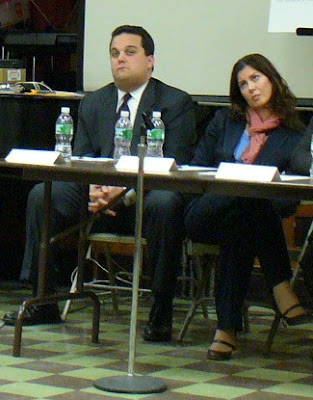 Two candidates in the June 3 special election to replace ex-City Councilman Dennis Gallagher backed out hours before a debate this week in what was seen as a political snub by the event's host.

Democrat Elizabeth Crowley and Republican Anthony Como had pledged to attend the Juniper Park Civic Association's debate Tuesday night, but both bailed out via phone message shortly before it was to begin, said association President Bob Holden.

Both candidates ditched the debate in order to meet with the editorial board of a Queens weekly newspaper, the candidates confirmed to the Daily News.

"To me, this is disgraceful," Holden told the 150-person crowd at Our Lady of Hope in Middle Village. "They made a commitment in writing to us, the neighborhood, and then at the last minute they renege. What does that tell you about their character?"

Crowley chose the option that would "allow her to communicate with a broader audience," her campaign manager, Alyson Grant, said in a statement.

Como said he chose the newspaper meeting for the same reason when faced with a conflict after the debate was rescheduled.

Cute, Anthony. The newspaper called at 4pm on the day of the debate to schedule. You already had a commitment. 150 people were waiting to hear what you and Dizzy Lizzy had to say. Interesting how you both came up with the same excuse. Looks like you guys got exactly what you wanted - exposure to a wider audience. Your cowardice made the Daily News! Also made the Courier and the Chronicle. Congratulations!
Posted by Queens Crapper at 6:27 AM

If Crowley and Como have any opponents, I hope that person makes a point of using this stupid and childish behavior against them. I don't live in the area--but I'm willing to bet there aren't any opponents.

Well, there you go. One more admission of incompetence.

What if (OMG) Crowley were actually elected, and there as a vote scheduled to raise the water rate by 20%, at the same time as another date with Sanchez, when would she discover the conflict? Would it be her absence that allows the bill to pass?

Personal time is far more important than taking care of the voters.

Dizzie, you made the commitment to the voters in writing long before you ditched that promise for a date with Sanchez. And, you could have scheduled your date with Sanchez for late Tuesday night (your best operating hours, it's rumored), or Wednesday afternoon; others did.

You were in a Dizzie Lizzie tizzy because of your "Fear" of answering "tough" questions from voters. You're afraid of voters? What are you hiding? You publicly demonstrated your stupidity by giving the finger to voters; so what else is it that you are hiding?

What questions do you want to avoid? Tell us so that we won't ask them.

It's you who make yourself unimportant.

I disagree with the Crapper plenty, but on this one he is absolutely correct. They should never have committed to attend and then cancelled at the last minute. Many people showed up just to hear what the candidates had to say. If they didn't want to attend a JPCA function, they should have declined in the first place and not played games like they did.

Look, as far as the machine is concerned, THEY call the shots. If they don't want their people to show up, that is fine.

The machine has such control over the media and the civic world, that almost all opportunties for the public involvement is carefully scripted to the point of meaningless.

These guys will still get rave reviews from the local press. And, since so many in Queens are gently encouraged to stay asleep (or pretend to be asleep since they know what is in store if they are not) they will get the votes.

You really f----d yourselves royally "fat" Tony and "dizzy" Lizzie!

Now the world can smell your dirty laundry!

Enjoy your payback at the polls!

It's a good thing that Lizzie
was Mc Laughlin's "squeeeze".

It two-ton Tony ever mounted her
she'd suffocate under a sea of flesh!

Ye-c-c-c-k !
Pardon me whilst I barf up the "Cheerios" I just ate for breakfast!.

i was at the meeting and there were not 150 people there. There were empty seats in every row.

Really? Well I'll be sure to take the word of some anonymous asshole over a professional reporter who stood in the back of the room and counted heads.

you just posted as anonymous. and i was sitting in the 4th row on the left side infront of the JPCA board members, thank you.

Actually you couldn't have been sitting in front of us because we were facing the candidates on the other side of the room.

i was sitting on the same side (left) facing the table where the JPCA board members were sitting. sorry that i did not mention that your table was angled toward the candidates and the right side of the room.

on a side note i wanted Liz to be there so i could have asked her personally to her face about her money problems. 26 of the 51 slush fund council people are Dems, maybe she thinks she can get in on that too.

Ok, Mike, thanks for your feedback.

Good photo of dumb and dumber.

What they're thinking in the picture.

Dizzy Lizzy: "On my gawd, this is like so boring, and Budda-bing over here is grodie to the max."

Nice article John. Saw you sitting in front of me with your corduroy jacket and argyle-like sweater. You really need to smoke a pipe to complete the look. Do you think writing for the daily snooze makes you some kind of intellectual?

Too bad Queer Eye is off the air.