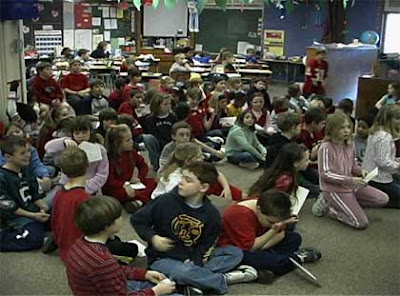 Though the department is in the process of adding more then 63,000 seats before the end of fiscal year 2009, overcrowding still persists. That left some members wondering whether the city should tap the use of eminent domain to create more school space.

Take Jackson Heights, said Councilmember Helen Sears. Her district in Queens has only one high school, she said at today’s hearing, which has more than 4,000 students. Though the area has gained several elementary facilities, its high school needs have been ignored, she added.

There you go folks. We now have managed to build on every space left in the borough and will have no choice but to use eminent domain to make new schools (after we first expand every existing school into their schoolyards).
Posted by Queens Crapper at 10:03 AM

One good thing about David Paterson is that he's supposedly against eminent domain, especially in relation to Atlantic Yards. However, if eminent domain is used to create more schools, I could foresee him doing a "flip flop".

In our north Flushing School District #25, our illustrious City Councilman John Liu has been bitching about the lack of school seats. I can't wait for him to explain the disappearance of the one family homes here that are being replaced by multi-family apartment houses and the impact this has on the infrastructure. Hey John, why allow all of this residential development when you know the community can't handle the present load, especially when it comes to school seats? What a tool!

What is the purpose of the Department of City Planning? They do not appear to do a very good job of planning anything. They allow multi family units to replace one or two family homes increase the density of communities, destroy the character of neighborhoods and then after all is said and done they wonder where are the kids going to attend school,where is the excess rainfall going to go since everything that is not livable space has been cemented, the sewers are inadequate and the list of errors or miscalculations goes on and on. Does the right hand know what the left one is doing????

I can't wait for him to explain the disappearance of the one family homes here that are being replaced by multi-family apartment houses and the impact this has on the infrastructure. Hey John, why allow all of this residential development when you know the community can't handle the present load, especially when it comes to school seats?

The system will insure that he will never be asked, and if someone does, never be reported.

Look, people, all you need to do is the following:

every time a poltician stands up and starts to drone on about how great development is, wait until they turn the cameras on and shout from the back of the room

Better if you have a few people with you and each one can belt out a topic.

If they throw you out, make it a freedom of speech issue.