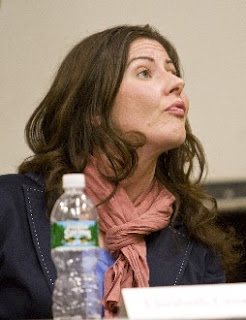 So Schenkler and Sanchez both endorsed Liz Crowley this week. Why? Because they were told to. No surprise, really. The official reason from both papers is that she will work well with unions (she has lots of experience banging the union boss. I wonder if McLaughlin bought her expensive baubles with the kids' money he stole.)

QC fans are scratching their heads:

I'm sure you're going to be all over this but the Queens "Ledger" endorsed Liz Crowley.

All I can say is I've heard her speak in public twice, watched her on television once, and talked with her briefly one-on-one a couple of times and if there are hidden depths there I sure couldn't plumb them. She's so unrelievedly second rate that friends who don't even live in the district and couldn't care less about the election are ready to come hand out fliers for Ober.

The same goes for Como, whom the "Ledger" also fawns over for some reason. If these two massive inadequacies are the best the major parties can come up with then partisan democracy has aborted in Queens.

The reason the Ledge loves those 2 so much is because they went to their round table discussion and not to the debate they promised to go to, hosted by a group that Walter Sanchez hates, as evidenced by the mention he gives them in his editorial.

Thankfully, we also have the Forum West, which isn't drinking the Crowley Kool-Aid...

Forum West editorial:
Why Crowley Can’t Go to the Council

Watching Crowley on the debate front is truly a treat for anyone who is in need of a good laugh. She claims to have a Master’s degree in urban planning, but in fact the only thing she has been able to truly master is answering a question without anything remotely resembling the right answer. She has labeled herself an environmentalist because she drives a hybrid and has named Tony Avella as the “worst NYC Councilman ever,” apparently forgetting about sex abuser Dennis Gallagher. Over the Memorial Day weekend she flooded a parade to honor war dead with her campaign literature and spoke through the entire ceremony.

You might ask yourself, “What could be in her head?” We can answer that one for you. Nothing. In fact the notion that she could even be a consideration for public office is truly frightening. Her election would be enough to cause property value in the community to plummet.

Forum West Op-Ed:
Are You Smarter Than A Fifth Grader?

She is being backed by the Democratic machine that pumps Queens County Dems and is coincidentally headed up by Dizzy Lizzy’s cousin, Congressman Joe Crowley. So in this case of the “fish stinks from the head down,” it is plain as day that on both Democratic and Republican sides of the coin, backing was given to Elizabeth Crowley and Anthony Como without any consideration to either of the other candidates or their merits. The arrogance of party leaders made a determination as to who the supported candidate would be without a consideration of others seeking the seat.

Glad that someone in the press not only "gets it" but also prints it!
Posted by Queens Crapper at 12:30 AM

"While Anthony Como and Elizabeth Crowley might lack in experience, they make up for with a nice support team from their respective political parties. Maybe neither will be a great leader right off the bat"

Translation: They both suck, but they're connected, so its ok. Vote for a clubhouse hack like the ones who embrace this paper.

When I read the Ledge's piece (of shit), I actually thought I was reading the Onion. It was so stupid, you couldn't take it seriously.

Now, time to wipe my ass with the nice copy of the Ledge that I swiped, and didn't pay $.35 for.

What self respecting union member would ever vote for this tart?

She hooked up with the confessed, convicted felon Brian McLaughlin. He ripped off the unions funds for 2.2 million dollars. He robbed the Little Leaguers.

He used unpaid forced union labor to work on his massive house.

He worked at least one elderly union member into the ground.

Then he turned around and screwed this Crowley trollop. He was showing her the ropes on how to cheat unions, taxpayers and little leaguers.

But, here's the laugh: He cheated on his wife and children, and then cheated on the Crowley slut too. When he finished with her services each day, he went to his other girlfriends.

Crowley wasn't even good enough at cheating to stay with for too long. If he wanted to spill the beans on this cheating, he would tell us that, after her last grunt, she would start speaking, and he considered that to be too much torture. Even after a (somewhat) good screw, she had only stupid things to say in that nasally, whining voice.

Joe Crowley, in the meantime, was pimping this Dizzie cousin out to McLaughlin and others for political advantages.

Like all good hillbillies, cousin Joe was keeping it all in the family.

Crowley: what's the difference between Lace Irish and Shanty Irish? C'mon, you do know that.

Liz must have given Walter and Mike
something really "special" for their birthdays for blowing an endorsement her way !

She does not seem intelligent at all. She is campaigning nearly everyday at the Fresh Pond Road M train stop at the same time. So all she is doing is seeing the same people over and over. She must think bombarding people with her name rather than any substance is the way to get elected. I hope she is wrong.

I truly believe that Dizzie Lizzie really wants no part of a job that requires her to be attentive to details and pay attention to the most boring problems that need attention: garbage pickup, dog poop, traffic, noise complaints, cracked sidewalks, etc.

She may believe that she can pass off the endless stream of constituent problems to staffers, while she sticks to more glamorous worries, but, constituents want - demand - attention and fixes to the problems they bring.

She actually does know all this, and is doing all she can to sabotage her own chances of being elected.

Nobody could ever be as stupid as she pretends to be (except Como), but, what if her lowbrow stupidity is no act? Do we want a defect to be handling our community problems?

Can we afford still another moron voting on the spending of our tax dollars? She would faithfully follow all instructions from Parkside, Cousin Joe, and her developer friends. While we work, she spends? No, no, no!

Crowley is a disgrace, And so are the unions who support her.. Wake up Union Workers.. You bust your back working and bring credability
to the craftsmen that you are and then you let someone tell you to back a hack. Remember Joe Crowley marching in the street with his arms waving to help migrant mexican workers? Good Job Joe! Has
everyone forgotten McLaughlin? They are into self preservation. As far as the Queens ledger, They are looking for two adds from the Crowleys during the holidays so Sanchez could afford a Hotel room .

Look at that photo of Empty Head again. Is she about to spit a mouthful of water at someone?

Or, does she always look this stupid?