The truth about the Crowley dynasty 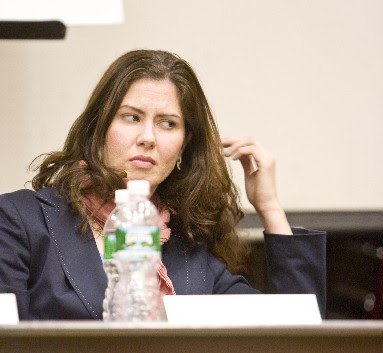 Both of Elizabeth Crowley's parents were appointed by the Machine, not elected by the people. (There were no special elections in 1985, you just did a favor for Donald Manes back then and got in.) Together, Mr. and Mrs. Crowley served less than a year in the City Council.

How can Lizzy claim she was involved with the political campaigns of her mother and father (as she stated in the NY1 debate) if there weren't any campaigns, and especially in light of the fact that she was only 7 years old in 1985?
Posted by Queens Crapper at 8:58 AM

Why does Walter Crowley have both a public school and a park named after him?

Especially since he sent all his kids to Catholic school!

How long before you post the picture of her with her finger up her nostril? Somebody had a lot of fun photographing this woman!

Finger up the nostril? Nah. Got MUCH more embarrassing ones than that.

Politicians love to have their photos taken. So snap away, I say!

She can say it on NY1 because it's possible that more people watch NY1 than read this blog. And no one involved in the debate would've called her on that--or did they?

If you're dizzie enough, end squeeze your eyes and sphincter muscles tight enough, and wish hard enough, even a 30 year-old ditz can imagine running a successful political campaign when she was 7.

It's sorta like the wish Hillary had that there were snipers in Bosnia making her a hero to her daughter.

All Dorothy had to do was click her heels and she'd be in Kansas!

It's a little girl thing.

But, in the photo accompanying this little fairy tale, she looks like a very, very spoiled and angry little girl. Did she just finish stepping on a cat's back?

Was she pulling bubble gum from her hair?

Tsk, Tsk, Dizzy Lizzie; your land of make believe is too fantastic, and not very cute.

When will you ever grow up?

Just went to the Maspeth Memorial Day Parade. I can not believe that Ober and Crowley campaigns where handing out palm cards. I knew they where stupid but this one takes the cake. How does a candidate's campaign profit on a deceased Veterans back ? Pat Toro president of the Veterans group who helped orginize this parade was livid and publically scolded these morans. Veterans let these morans know how you feel on June 3

Oh my, oh my the dirty politics in my borough. What's particularly disturbing is that, having heard them all several times in person, the all-but-official candidates of the two parties are so clearly second rate. Como is massively inarticulate, Crowley acts as if public office is her birthright. Both are apparently at least moderately dirty, too; Como has been accused of shaking down subordinates for contributions, Crowley is still paying off fines she incurred for campaign finance irregularities during her first run, in 2001.

First of all, Ober's guy gave out campaign literature before the parade, not during it like Elizabeth did. Liz also had one of her men walk around with big signs taped to an easel advertising her filthy self. She also invited herself up onto the grandstand where the already-elected officials were. Why does Joe Addabbo always find himself next to the biggest pigs when he forays into CD30? Also, Serf's car had a big banner on it that said "Anthony Como salutes our veterans" or something to that effect. Was Pat Toro upset about that? I doubt it. Serf licks his ass whenever he gets the chance to. How about the fact that Chuck Schumer walked in the parade by himself with his 2 aides carrying huge signs announcing his presence? Did he stay for the ceremonies? No. Was Pat Toro upset about that? How about the bank president who unveiled not only a monument to a bank employee but also his name on the Maspeth Walk of Honor? Was Patty livid about that? God, this town needs a high colonic!

When Liz gets in, Pat will kiss her ass and she will give the vets money and they will live happily ever after, just as he did with Gallagher.

I have been going to the parade since I was a little girl and pols running for office have always handed out literature at the parade. When you think about it, we are having elections because the people we honor on memorial day fought and died so we would have the right to do so. So I don't find this offensive. Overdoing it, though, makes you look indecent.

So why didn't Joe march in the parade with his cousin? Did he see the NY1 debate, perhaps?

During the Forest Hills parade - Handing out Maltese literature. We ripped it up.

But we did not go yesterday as did Liz and put Charles posters up any where near the parade. We will do so this week, but we had decided to wait till after the parade was over because we wanted to respect the veterans. I am sorry if we offended anyone but I thought that handing them out before the parade would be a respectful thing to do. Unfortunately, because this election is so short we must try to take advantage of every opportunity that we can for people to at least know Charles to make a determination about who they should vote for,

Ober is the best qualified candidate out of the 4. He has never been involved in a scandal. He has never been investigated and no one has ever so much as made an allegation against him. He is one of the most honest people I have ever met in my life. He also has integrity like no one I have ever known. But even though he has done so much for our communities and because he has been a very humble person never taking credit for anything he has done, he is also not as well known as the other 4. So I decided that I had to take the opportunity to get his name out there in as little fanfare as possible. That is why our palm card was so small. because we did not want to take away from the veterans.

If we offended you I am absolutely sorry. That was never my intention. I have the utmost respect for our veterans. We did very little to make any noise about Ober. As Crowley was not only handing out big cards as literature during the campaign but she also walked with Joe Addabbo campaigning on Grand Ave. That was a campaign move. We could have walked with Tony Avella, but again we decided that this was not a time to politic. We did not have a car in the parade like Anthony did with his signs on it and we did not sit with the veterans inside the square like Anthony did. We did not come with anyone and Charlie was not even going to sit on the dais until someone on the dais called to him and invited him to sit up there. after about 5 minutes Charles had to step down because he felt that he should not be up there. Taking away the spotlight from the Veterans.

Again I am extremely sorry if we offended you, please except my apology, on behalf of the entire committee because that was not my intention at all. Please take into consideration that anything we did was way before the parade even started.

Hope your post is good intentioned and not to cause striff within Ober's campaign. You do seem to be posting it everywhere.