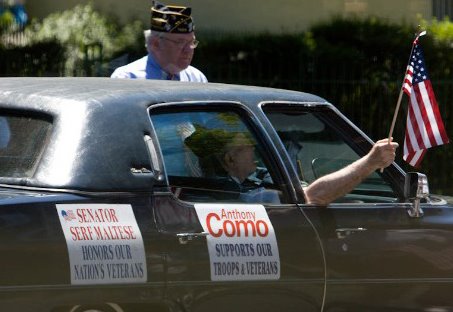 On May 25, as president of the United Veterans and Fraternal Organizations of Maspeth, I had the honor of leading off Maspeth’s Memorial Day Parade. Prior to the parade’s kickoff, I spent several frustrating minutes asking the supporters of various candidates to remove themselves and the signs and literature that they were holding during the parade’s assembly. I was extremely angered that these candidates would choose this venerable venue to do their politicking. As the parade began I observed these same supporters walking and running adjacent (on the sidewalk) to their particular candidates handing out pamphlets to the assembled crowd along the parade route. At the midway point I could no longer bring myself to march with these candidates so I removed myself and reunited with the members of the Vietnam Veterans of America, Queens Chapter 32 of which I am also the president. 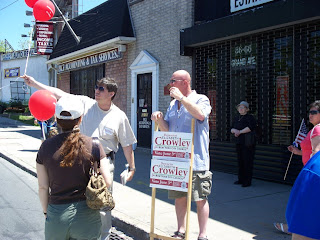 Memorial Day is a day of remembrance for those brave men and women who made the ultimate sacrifice for their nation. Memorial Day is not a day for politicians to hand-out their campaign literature to crowds participating in the day’s solemn ceremonies. I was angered that on Sunday, May 25 at the Maspeth Memorial Day Parade, a pair of the candidates blatantly disrespected the memory of our nation’s war heroes by using Memorial Day for their political gain and expediency. I feel it is my duty to remind those candidates that it is our soldiers who afford them the opportunity to run for elected office. More importantly, they should exhibit some reverence and respect to stop politicking for one day to pay homage to those men and women who have died to preserve our democracy. I believe that the offending parties owe veterans and their families an apology for their blatant disregard for the solemn ceremonies many of us hold sacred to honor our country’s fallen heroes.

You'd think Serf, being a Veteran himself, would have been a little more respectful. But I guess he's a political pig first.
Posted by Queens Crapper at 12:04 AM

A bigger political whore than Serph Maltese would be hard to find.

As a young man, Serf fought for America. Now, as a senile old corrupt man, he undermines the very democracy he once fought for by making backroom deals with Congressman Joe Asswipe Crowley.

I thought campaign signs weren't allowed in the parade, so what the hell is this???

If he does, he may not get his foot out of the huge pile of lard.

There are none of the typical Gallagher illiteracies, so I doubt he wrote it.

Pat Toro is up Gallagher 's ass. He made the parade political when he accused Ognibene, Ober and Crowley of giving out literature. In a letter to local newspapers, Toro falsely accused Ognibene who just marched in the parade and gave out no handouts.
If he wrote the letter how did Ognibene's name get in the letter?

What is worse, Toro never accused Como of doing the same when in fact Como was the most blantant abuser with a sign IN the parade. Funny I believe Toro is supporting Como.

This clearly demonstrates what type of person Pat Toro is. He will lie, cheat and be the biggest hypocrite to push his interests or the interests of his political cronies. The truth means nothing to Pat Toro.

Shame on Pat Toro. He has the appropriate name however. Bull. I would just add "shit."

Um, can anyone tell me what exactly is wrong with candidates campaigning at a public parade - as long as they do so tastefully? Whatever you might think of individual politicians politics itself can and should be an honorable calling. Government of, by, and for the people is one of the noblest contributions America has made to the world. How is it disrespectful to the honored war dead - who, we are told, died defending democracy - to humbly ask the citizenry for its vote at an upcoming democratic election? Me, I think it's a positively patriotic act.

I find two of the candidates in the special election completely useless and a third wholly unacceptable but getting on any of them for campaigning on a day that, at heart, should be a celebration of our democratic traditions – please, get over it already.

PASTOR TORO GOT CAUGHT IN A SCAM FOR HIS POLITICAL BUDDIES. HE DID THE SAME THING AT THE PORT AUTHORITY, HE WOULD STAB YOU IN THE BACK TO MAKE HIMSELF LOOK BETTER. HE'S SOMEONE WHO CAN NEVER BE TRUSTED.