Welcome to the Queens zoo 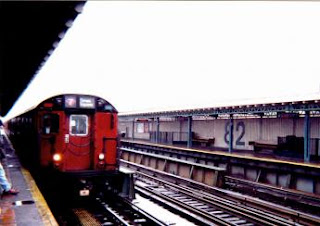 Why do the descriptions of these gawking tours for those intrigued by Queens ethnic groups (but would die if they had to live next door to them) make it sound like they are trips to the Bronx Zoo to observe exotic animals? Is this what the image of our borough is to those living outside of it these days? I guess the 7 train serves as the monorail...

So while they're coming here, let's take the 7 train in the opposite direction and enjoy the mosaic museum that has appeared at Grand Central. From what I understand, it's easy to get there this weekend.
Posted by Queens Crapper at 12:45 AM

What a pair!
They're both in the same line
so they ought to team up for real!

At least in Italy the tour guide will pinch your ass if your a decent looking woman
(heh, heh, or even a man, perhaps) to get a tip!

Mr. Eichenbaum calls himself
an "urban geographer", I believe.

What a pompous bore!
I've attended a couple of his tours...sprinkled with historical inaccuracies and his own personal opinions!

I had to stuff my cheeks with some crunchy "Doritos" to drown out his droning!

Reminds me of the Chinatown slum tours they gave a century ago.

Instead of opinon dens, they can walk by Mexican gang grafitti.

This guy is a joke. I showed up at one of his LIC tours last year and he did not even show up.

Some other fellow from a local group was there, and gave a talk, and handed out HIS cards for a tour he gave a week later.

I went on that one. Needless to say, it was excellent.

What Queensmarks are to Landmarks Jack is to Justin or Richard.

This guy is strongly pushed by Terri O of Boro Hall.

You have to admit the way the populations have shifted is know of funny.
In earlier imigration waves, they clustered close to where the boats dropped them off, on Manhattan and Brooklyn.
Now they are ploppling down near the airports.

Was there last summer with my girlfriend. IWe knew it was bad but not THAT BAD!!

Took the LIRR and cut through the park where whispers from behind bushes called "good smoke" "Coca". These squat monsters were "Cat calling" and yelling things in Spanish "Buta ?" at my girl
The area was filthy, smelled like garbage and piss. At the corner of King of Corona was this huge traffic jam and road rage fights breaking out. The King of Corona sat in his white hat with the worst look of discust I never saw on anybodys face in my life.
The place must be one of the worst 3rd world, its noisey, filthy and smells like pee & garbage cesspools in the country
......"Beneath The Planet of The Apes"

If this is the way they market Queens you have some real problems.

I have been on this guy's tours. You can't hear him, he wanders off, and is really not all that knowledgable.

I caught at least 10 mistakes on one tour alone.

What the hell is he doing a tour in Forest Hills for? The money?

Oh, I guess he's still waxing nostalgic about the days he was an ineffective chief of staff for former Councilman Morty Povman!

Even Dr. Jack Eichenbaum does a better job than he does and that's not saying much!

"Dr. Jack" is a former NYC civil servant "tit baby" that did something or other in exchange for a municipal pay check and the pension he now draws.

Does anyone know exactly what
what he did?

What about
the the Gottlieb & Perlman team
(and many others like them)?

Their "Rego Forest"preservation org
hasn't posted a single success
story for a building in that area that's been saved!

Every time a group like this forms
the public is lulled into living in a state of false hope that their neighborhood is being watch-dogged by an "effective" organized battalion of savvy preservation activists.

But that's too often not the case.

And that folks is downright dangerous....putting your faith in
fairy tales.

Why raise a sweat doing any real work preserving Queens' historic sites, when you can just conduct tours
and schedule exhibitions!

It's much easier that way!
Play the public relations game!

The more your name is out there, like QHS for example, the more it looks like you're doing a real professional job!

I find his way of showcasing my community like that offensive and insulting.

Gottlieb and Eichenbaum
are perpetually full of their own hot air.

If they took some anti flatulence tablets we'd all be a little better off (provided we're up wind when they break wind).