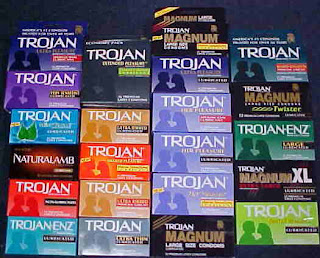 Federal agents staged raids in the metropolitan area Thursday and arrested at least eight people for heading a ring that authorities say has been smuggling into the country massive quantities of a wide variety of name-brand counterfeit goods manufactured in China -- including millions of counterfeit Trojan condoms -- which they then distributed, according to court papers and officials.

One of the raids was carried out by agents of U.S. Immigration and Customs Enforcement at 18-28 Troutman St. in Ridgewood, Queens -- a building used by the ZX Trading Co.

Those arrested have been taken to federal court in Central Islip, where they are scheduled to be arraigned Thursday afternoon on a variety of charges, including selling counterfeit goods and the financial crime of structuring transactions.

Todd Greenberg, a Forest Hills lawyer representing two of the owners of the ZX Trading Co. who were arrested -- Lin Hu and her brother, Jian Hu -- said his clients are innocent. Lawyer Glenn Obedin of Central Islip, who represents another of those arrested, Jian Wang, said his client is innocent of the charges, as well.

The assistant U.S. attorney prosecuting the case, Charles Kelly, declined to comment on Thursday.
Posted by Queens Crapper at 3:17 PM

Does that mean that the people who used them had fake sex?

Someone said that Crowley was so full of sperm that all her dates called her 4x.

So only now the US Attorney learns she's a phony?

and A GOOD INVESTMENT OPPORTUNITY!

A nice way to turn around a sleepy down at the heels community, don't you think?

The mainland Chinese are simply jealous of our comparatively low population density.

Do these rubbers come with pinholes
in them so as to cause our birthrate to increase to the same unmanageable levels as the People's Republic ?

Their Trojans
are made from recycled tires!

Blowouts are to be expected!

H-m-m-m...
first it was lead paint on toddlers' toys, counterfeit "Duracell" batteries and now bogus condoms! What next?

"The mountains are high and the emperor is far away".

That old Chinese way of saying anything goes that goes undetected!

We hear that in F-Liu-xhing you can buy anything from a $5 hooker to a replacement kidney!
(Make sure it's a human specimen).