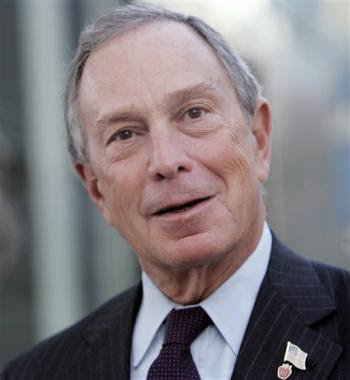 “People gave their lives so that they could protest," he said. "And I think it is wonderful they protest. It would be a shame to have this freedom to express yourself and to try and influence government and be too lazy to use it."

"So I always put a smile on my face when I see the protesters. Some I agree with, some I don’t. In this case, I don’t.”

Bloomberg loves protests, but only when they aren't directed at him. When they are, he sics Nazli on you.

P.S. They booed Mr. Met in Whitestone...It's going to be a long summer.
Posted by Queens Crapper at 12:10 AM

He loved the protestors at the 04 convention so much he thew them in jail for nothing along with people who didn't give a shit bout the convention who were trying to get to work.

This sac of shit mayor cares only about his image and won't let anyone with an opinion tarnish it. With this lying hypocritical statement, he once again drops his pants and shits on us all, insulting our intelligent with his verbal diarrhea. F U Mike. I can't wait till you leave office, you turtle-faced turd.

You didn't "appreciate" my political cartoon (protected by the first amendment of the U.S. Constitution) depicting a little bird perched
atop a noose....protesting the massacre of over 200 old growth trees on the St. Saviour's site....
"Mayor Hypocrite"!

Boob-berg is the only mayor I can think of offhand that can shit simultaneously from his ass and his mouth without losing his step!

We can expect a slew of lengthy retorts regarding Mayor Midget's popularity among New Yorkers!

It's been confirmed many times
(by the ISP address) where these counter posts originate from.

And they keep trying to tell us that nobody pays any attention to "Queens Crap".

The major TV networks only wish
they had our ratings.

How does a turtle smile?

Jerry, you're sooooo right. A picture made this Commissar say: "Eeeeeek" so he sent his henchdyke out to attempt to make the protesters submit.

Well, the free Americans told the two comrades to shit in each other's hats. Which they did. That night, during the caterers' ball (or balls).

Parvizi, you though we all forgot you, eh? No, you're the joke that keeps us all laughing (at you and the Commissar).

So they "booed" him in Whitestone eh?

The only "claps" he'll be getting are the sexually transmitted variety
from his...ahem....(male?) lover(s)...maybe.