Trimming the fat from pork 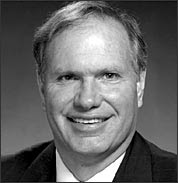 "City government must restore New Yorkers' faith in the system," said Avella. "It is time to end the slush fund."

In a plan he intends to formally announce later this week, Avella stops short of calling for full abolition of the discretionary funding of nonprofit groups - as has been urged editorially by the Daily News and other news organizations.

Saying many such groups provide essential community services, Avella called instead for stripping Council members and the speaker of direct control over funds granted to nonprofit groups.

Under Avella's plan, grants under $50,000 would be disbursed by setting up a community funding team in each Council district, consisting of the Council member, a community board representative and a city agency representative.

Until you mentioned a council member and a community board member it sounded pretty good...otherwise it's still pork!
Posted by Queens Crapper at 12:29 AM

Regarding rogue developers, our politicians should suggest that grants be disbursed to a community funding team to fight Tommy Huang and others. In each Council district, it should consist of the Council member, a community board representative and a city agency.

Most of his victims cannot afford to litigate against him and other offenders. Money well spent perhaps.

Most council reps and CB types
are themselves the problem.
They're as crooked as a country road in many districts (i.e.
former C.M. Gallagher).

It wouldn't take long for the same old corrupt slush disbursement system to re-surface once again!

The "butcher" (be it DOI or the FBI) needs to kill a few pigs (council crooks)
not just trim the fat off the pork!

Put those porkers in the pokey!

Come on, Tony, the problem is not the big bucks going to the big institutions, but the smaller guys getting strangled because all the money goes to satisfy political agendas rather than quality programming.

In Queens, the bigger the organization, the lamer the program.

Tony Avella needs to make sure the projects go to small community projects, not groups who have a long history of corruption and incompetence.

I have very little faith in Tony Avella. Any one who claims to be a good friend of Charles "Sonny Carson" Barron isn't someone we can count on to do the right thing.

Charles Barron is a bigot and a racist and Tony Avella is an idiot for aligning himself with him.

How can the JPCA talk this guy up? Like in the past with Gallagher and Ognibene as long as you cater to the JPCA, they ignore your issues and blemishes until the day you agree to disagree with them and suddenly the attack dogs are unleashed..

"Charles Barron is a bigot and a racist and Tony Avella is an idiot for aligning himself with him."

Get over yourself already. You are so boring.

Great for Tony that he is trying to construct an honest solution to the slush scandal.

Here's an ingredient I propose: Have an attorney sign off on the grant. If it turns dirty, his license is revoked permanently AND he and the organization pay a big dollar penalty. No statute of limitations on the time to discover the fraud and convict.

The icing: the original Council Member who pushed the grant is forever removed from holding any public office - even as a minor employee of a city agency or a contractor getting paid by tax dollars.

Rip off the taxpayers. Suffer a ferocious penalty.

So you hate the JPCA and all its members and leaders.

Who cares about your hatreds?

Get over being a very boring moron and go to church.

A few months ago Avella was giving a speech to the Cement and Concrete League in Manhattan. So he is aligned with unions and developers alike.