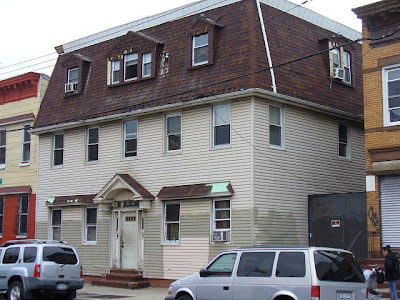 Crappy came across this house on Wyckoff Avenue in Ridgewood last year and it struck me as very old. So I asked 2 people whose opinions I trust about these things. Here were their answers:

Opinion #2: "That building's been totally done over. My take is that it's a Second Empire-style building that's been totally messed up - so, 1855-1870. Typically, they had mansard roofs - that B.S. asphalt shingling was put on after they pulled the slate off. You can also see the cornice peeking through at the top left corner - other details are peeking out as well. The entry portico is throwing me off a little - I don't think it's 18th century, though."

I did a little research and found that in the 1800s the land the house stood on belonged to the Van Nostrand family, and also found some evidence that the house may have been moved to allow for the widening of Wyckoff Avenue.

So what do you all think?
Posted by Queens Crapper at 12:00 AM

I know this house, My grandfather was friends with some German guy whos father owned a brewery down Bushwick ave.
I was maybee 7-8 years old at the time. At the time The inside and outside defenetly looked really old and cool.
Shame how the current owner crappified it with Home Depot materials.

Personally, I'm just impressed that you took the time to dig up all the information on it that you did. Good job.