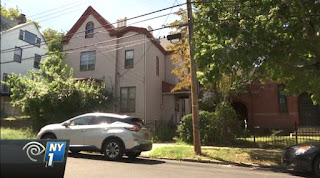 Letters overflow from a mailbox, a sign that the house at 32 Brownell Street in Stapleton has been vacant since the end of June.

It used to be "Neighborhood Homes," a 12-bed adult homeless shelter for recovering addicts.

But the Department of Homeless Services (DHS) did not renew its contract.

"This provided a last step for people as the reentered out community. And we've lost that valuable piece of the puzzle," said Reverend Terry Troia, the executive director of Project Hospitality.

Troia says that even though 75 percent of residents at "Neighborhood Homes" were successful finding jobs and a housing post-program, the shelter's contract wasn't renewed because the program was apartment-based.

"Our setting in an apartment in the community was no longer acceptable to city standards of how to provide shelter for single homeless people," Troia said.

Of course! Why would you give people apartments when they can be warehoused in a hotel instead?
Posted by Queens Crapper at 7:03 AM

So it is possible to provide dwellings with kitchens.

What a crass and cruel display by our fucking fuck mayor. Oh, well off to Maspeth or Bed-stuy with them.

This is what is called a Holiday Weekend Document Dump.

Notice that this story is from Saturday and shown when everybody was at the beach and barbecue.

THESE STORIES ARE RELEASED SO THAT THEY WOULD NOT BE SEEN!!!

Why does the city object to apartment-based programs? Is it because they might foster independent living again?

With too much overbuilding of multi family apartment buildings and hotels, NYC's landlords are left with a dilemma.
The glut has caused vacancies, and REBNY's owned politicians come to their rescue.
House the homeless there. These crooked pols , will be rewarded with campaign contributions.

So now we know what happens to groups that don't give large donations to the mayor.

This was NOT providing apartments, and not an apartment-based program. Troia/Project Hospitality do not know how to do anything but collect money - we call her a Welfare Queen. I sit on the CB where most of her operations are located - people who require serious supports are kicked out onto the street during the day, and local communities are not (to put it mildly) happy... remember Eric Garner? Cops were told to crack down on "problems" in that area - usually caused by Troia's clients; the area is hoping to gentrify (or something).

Men have been hanged for less--FAR, FAR LESS!

I just attended a town hall meeting tonight regarding turning the "T" Building of the Queens Hospital on 164th Street into a combination of 75 apartments for severely mentally ill people and 125 apartments for "low income" people.

You could clearly see who was paid off to support the developer, Dunn, who apparently has done several of these mixed-use building rehabs in the city. Doubtless this project got an automatic rubber stamp from DeDumbDumb. I wonder if all of this developer's projects have a NINETY-NINE YEAR LEASE like this one would? The people from the Health/Hospital Corp. were in favor of Dunn doing this, the people of the HHC Auxilliary were in favor of this, the local electrical union rep was loudly in favor of this (and after the initial construction when the community is left with this horror, what's further in it for the electrical union???), but the people living in or near Parkway Village co-ops (which directly abut this building) were vehemently against this use of the building. Rightfully so, as they told tales of garbage strewn in front of their homes by hospital people even now, of no parking left for them, of fearing being accosted by these mentally ill and homeless people (of course, the developer promised 24/7 security---ha!), of structural damage done to their homes by the physical impact of the construction of other hospital buildings, of danger to the children attending the several high schools and elementary schools in the immediate area, of more mentally ill panhandlers, etc.

Some of the lackeys obviously paid off to support this project (including some of the pols present) used the threat "if this highly responsible developer Dunn doesn't go ahead with this project, some other project will still go on here and it might not be nearly as good.