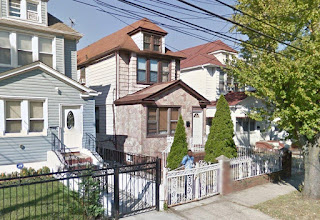 A housing inspector endangered the lives of his tenants by violating the same building codes the city employed him to enforce, the Queens District Attorney’s office announced Tuesday.

Derrick Allen, 58, a Brooklyn inspector for the Department of Housing Preservation and Development who owns two buildings in Queens, was charged Tuesday with illegally converting the cellar space in his Rosedale and St. Albans properties into dangerous living quarters, according to the DA’s office.

The units — hooked up to illegal gas and water lines — lacked adequate exits and natural light, which District Attorney Richard Brown noted made the residencies dangerous not only for tenants, but emergency responders as well.

“Such conversions jeopardize the lives of not only the buildings’ residents but firefighters and other personnel who in responding to an emergency are confronted by a maze of rooms with no way out,” said Brown in a statement.

“As a code enforcement inspector himself, the defendant should have known better.”

The Housing Department first became aware of Allen’s practices as a landlord on Aug. 18 when an illegal tenant in his Rosedale building called 311 to complain about building maintenance, according to the DA.

Housing inspectors arrived one week later to find four illegal single-room residencies in the basement with access to only one exit, as well as a shared kitchen with an illegal gas stove and a bathroom with a hole in the ground where a toilet once stood, the DA said.

Tenants were ordered to vacate the premises immediately due to the unsafe circumstances, the DA said.
Posted by Queens Crapper at 5:58 AM

You know that you can not survive on a city salary in this city.

He was filling a demand that was not being met...

Lock this irresponsible, arrogant and greedy defiant hypocrite, pile of shit up. Or at least egg his house.

REALLY, $71,000 in over time, plus his bloated salary and he does bullshit like this in his own community. Hang this motherfucker in filthy Major Mark Park for all to see.

I'm sure he is not the only one. Notice how many housing inspectors are recent immigrants from 3rd World countries. It's true.

IT'S NOT SIMPLE ECONOMICS UNTIL THE HOUSE NEXT TO YOU GOES UP IN FLAMES BECAUSE OF FAULTY WIRING DONE BY SHODDY ELECTRICIANS WHO WERE HIRED BY A GREEDY LANDLORD FORCES YOU AND YOUR FAMILY TO EVACUATE IN THE MIDDLE OF THE NIGHT. ECONOMICS IS NOT ALWAYS JUSTIFIABLE!!

Rosedale, St. Albans!
What can you expect. Another forgotten corner where nobody gives a damn.
Now, NAIL THAT HOUSING INSPECTOR'S ASS TO THE WALL!
Yeah. Right. Where is the tooth fairy with my winning lottery ticket?

Typical City employee tactic- Isn't this a conflict of interest?

Wonder how they got him.... guess his tenants got tired of his crap or else it was the people he supervised. Good for who ever dropped the hot dime on this example of his culture.

Isn't it wonderful how immigrants are purchasing so much property in Queens County?

Affordable housing! DeBlaz would love it.

Blame dumb blasio, that big, decaying turd--for allowing a third party commission to determine 32% raises for the source of all city council corruption (instead of by the right way of public referendum!), and 1% raises for the police, which is a proven 'Cause & Effect' for all other graft, greed and vigilantism style governance of the rank and file, for survival of the rapidly disappearing American middle class.

Apparently, this Tale of Two Cities dickhead is at the top of all citywide corruption, graft and greed himself, ironically that he portends to reject, while taking the very best of everything for his 'friands & family' city payroll!

Typical, depraved Democrat (not that the RNC is any better--it's even worse!), and the greatest impostor of a public servant of them all, where now he doesn't even pretend to care about the city that he continues to destroy with a vengeful impunity. Men have been hanged for less--so, why isn't this parasite impeached already?

All of the housing inspectors that ratted on him probably have the same thing going on in all their houses too! I'll bet any amount of money on that! They are like the cops, they think that just because they enforce the laws means that they can break the laws too.

I CAN'T WAIT FOR DIBLASIO AND HIS CRONIES TO BE VOTED OUT !!

Just follow those vans and panel trucks from any Queens Home Depot. That's how ya catch'em.

These are the same inspectors who when you complain that there is a illegal basement apartment in a home, say there is no access to home and closes the complaint. They are all full of crap.