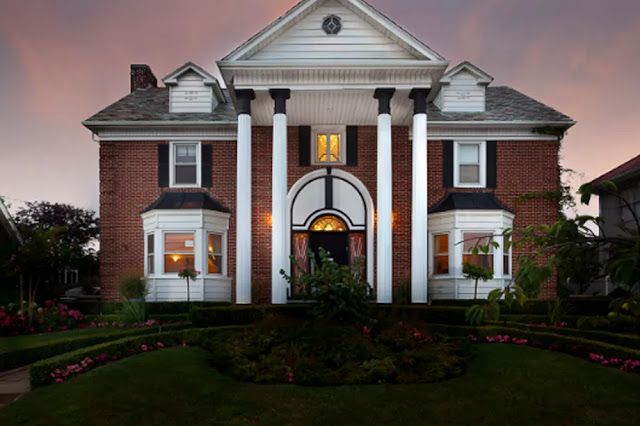 A house that looks more like something you would find in Beverly Hills rather than in Queens has hit the market for $3.3 million. The extravagant home at 180 Beach 147th Street in Rockaway Park boasts a semi-circular, planted entrance leading up to an entryway with four huge Corinthian columns—and that’s just the beginning.
Posted by Queens Crapper at 9:08 AM

I saw this last week and I wondered why it's posted here. It's quite obvious.

This barbie house is bonafide Queens Crap. The curbed article basically fawns over the fact that it's by Riis Park, which is on the Gentrification Industrial Complex's list of Brooklyn/Potemkin style makeovers-cum-takeovers. There are a lot of large houses nearby but the majority of them are modest and not ostentatious. Maybe that house will be used for hipshit artist-collectives. Or from the looks of it, some tastemaker fashion blogger or trust fund babIt also made me nostalgic the Ahmed Realty era and all the multiple eyesore mcmansions that proliferated in the ozone park and richmond hill in the 90's and early aughts.

Oh good, it will be with in walking distance of the homeless shelter proposed in the old Nursing Home by Riis Park.

I'm so glad that the basement is finished because another hurricane or storm surge will finish it off again.

a house only a Goodfella could love

Now, as gruesome and ghastly as it is to look at this 'hideosity' (undoubtedly one of too many), the address of Beach 147th Street would not be a part of Rockaway Park, but rather Belle Harbor (depending on the zip code), or possibly Neponsit. A minor detail, but one that goes to accuracy in reporting nevertheless.

It's Belle Harbor. 147st is just a few blocks away from the Riis Park entrance and lot. Curbed really fucked it up here or it was probably written by a REBNY syncophant, because of the sudden interest to remake Riis Park into the Hamptons or what I have just christened, Brookpotemklyn. Maybe it mentions Rockaway Park to drive up the speculative market rate there, since there are plans to build more condo towers there with ahem, affordable housing for seniors.

The other type of sucker, I mean prospective buyer for this palatial dump might be some wealthy Indian, Bangledeshi, or Middle Eastern type. Like those loons that threw a violent party via Airbnb in Bayside last year.

These people are mentally ill. They really think a hurricane like Sandy will never happen again or they think towers, artisan food, craft beers and vibrancy will shield them from any natural disasters instead of crucial infrastructure and protection. Frankly I don't think those walls and dunes are going to do it. That concrete boardwalk is going to get creamed worse when the next Sandy comes. I wonder if these geniuses remember that Sandy wasn't even the strongest rated hurricane (it was category 2). What if a category 5 hit, or even 3?

Although, despite 3 days of sunshine and lack of isolated storms, there was a lot of land erosion to hopefully thwart their warped plans for gentrifying the peninsula. But this new era of realtors and developers clearly don't give a shit and care more about personal wealth and gratification than legitimate public safety.