More noise than ever over parts of Queens 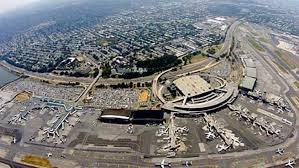 Northeast Queens residents saw 47% more departing planes from LaGuardia Airport flying over their heads between 2002 and 2014, an average increase of 2,779 flights a year, according to flight data from a group called Queens Quiet Skies.

And in nearby Jackson Heights, residents there saw a 78% increase in departing planes zooming overhead since 2008, mostly on weekends, according to the group.

“We all felt we were getting more airplane noise over this community,” said State Sen. Tony Avella (D-Queens). “Now the records show it.”

Brian Will of Queens Quiet Skies pinned the plane blame on the Federal Aviation Administration.

“They say this is because of wind and weather,” he said. “No, this is an operational change.”

As I understand this, you purchase a home in one of the world's largest and most popular cities that is next to an airport and you complain about the noise.

I am sure that "Transportation Alternatives" already has plans drawn out for express bicycle lanes to Newark Airport...

People bitching about airplanes flying overhead. Plans today are quieter then planes back in the 80s.
An boeing 787 makes less noise then a dc9 or md80.

So WTF is that group called "Quiet Skies" doing about this?
Sounds like they're a little too quiet themselves.

Where is Grace Meng?
Sitting on her ass just like her convicted criminal ex-politician father Jimmy Meng did?
The only way to get her to represent you is to BRIBE HER with campaign contributions.
Her daddy carried an$80,000 bribe, on behalf of a friend, concealed in the bottom of a gift fruit basket to a judge.
The FBI whooped his ass!
These are the kinds of crooked electeds we have in Queens.
Why? Because the electorate is oblivious. Remain dumb and uninformed and get rheamed!

What a lot of people are failing to understand about this issue is that due to NEXTGEN technologies being rolled out at every major airport across the country, the FAA is changing the existing flight paths. That means, you could have been living in a neighborhood anywhere for 50 years, and due to NEXTGEN, you now have a flight path moved to over your home. And this isn't just any flight path. This is a satellite guided path (rather than the older radar) which is in essence combining multiple older flight paths into one. Because of this new technology, planes are able to fly much closer to each other. So not only do you have a brand new flight path over your home that you never had prior, it is a highway in the sky with planes every single minute flying over you.

As you can imagine, this is something that is unbearable to handle. Also, please realize that the FAA can decide at any moment to move a flight path over your home. No environmental studies necessary apparently. Every single city that has had NEXTGEN implemented has seen a dramatic rise in noise complaints. The system is much more efficient for the airlines, but horrendous for us on the ground.

Fight it. Even if you aren't affected, because one day, you might be the one living with it.

Peace and quiet, a life absent of extreme unnecessary disturbances VS progress and money

Where I live, Rego Park, is getting a lot more noise these days than when I moved here 6 years ago from planes flying low to land at La Guardia. Some days/nights it is just one plane after another. Not pleasant.

"People bitching about airplanes flying overhead. Plans today are quieter then planes back in the 80s.
An boeing 787 makes less noise then a dc9 or md80."

Engines are quieter, but there are twice as many of them, which was the point of the FOIA and the press conference.

Sorry about your paltry aviation industry salary. They really should treat you guys better. You try so hard!

"As I understand this, you purchase a home in one of the world's largest and most popular cities that is next to an airport and you complain about the noise."

Another Kindergarten comment from Sarc, who obviously doesn't read the articles he posts about. Perhaps checking in with Brietbart more often than Queens Crap has affected his comprehension level.

THe number of flights has doubled over NE Queens since 2002. Many families pre-date this operational change. Many families are generational and own the same the property that their grandfathers had purchased, and were not under a flight path.

We didn't purchase homes under a flight path, the FAA has played aerial Sim City above our heads.

I know you read comments more than articles, and looking forward to your next off-topic, anti-Marxist diatribe.

Anonymous who posted about next ten has it exactly right. When I first moved to JH, there was some plane noise, but it was infrequent and tolerable. Over the past few years the noise got so bad that you could hardly hear conversations in your home with the windows closed. And the planes were flying every 90 seconds. Some Saturday's they'd start around 6:30am and go until almost 11pm. Thankfully I left. For those who think "oh you lived near an airport so it's ok", flight patterns are changing and any neighborhood could be next. My parents lived in Canarsie since 1980, and just started getting plane noise 2 years ago.

instead of panic about airplane noise,one should be furious with the S.E Asia Visa Overstays(90Days)that are being permitted by the Dem/Marxist pols. in Queens, .C.I.S.(Center for immigration Studies) states 500,000 overstays are here ,in 2015 alone ).what is the total since 1970?

N.E.Queens &Nassau cnty. have how many illegals residing there now ?the Syrians include 10,000 total this month according to J.Johnson,Obama's DHS Dir.

WHEN IS ENOUGH ENOUGH? Are the HOMELESS acyually ILLEGALs& Refugees?

Has anyone else noticed that the planes overhead seem to come in waves? On some days they're almost non-existent, and then suddenly you get a plane every minute or two.

Do I just notice them more because at that time I'm trying to watch something or have a conversation? Or is this really happening that way?

I attended a student play in the gymnasium of Msgr. McClancy HS (31st Avenue & 74th Street in East Elmhurst) in the early 60's. The production had to be stopped constantly as low-flying planes flew over the gym. And the gym literally shook when that occurred. Same thing with classes at the HS. Teachers had to periodically stop their lessons so that they could be understood by the students. The early 60's.

"Has anyone else noticed that the planes overhead seem to come in waves? On some days they're almost non-existent, and then suddenly you get a plane every minute or two."

When northeast is experiencing northwest winds between 5 and 15 knots, LGA will generally land runway 31 using the EXPWY Visual approach. NE Queens is spared of planes under these conditions as EXPWY Visual uses Flushing Meadows for noise abatement purposes.

Under all other wind conditions, LGA will now depart runway 13 using TNNIS or Whitestone Climb. They would use this runway at all times if wind guidelines permitted.

Yeah, thanks for the school lesson. We all know about Next Gen!
So what? Make noise or get more noise. "Quiet Skies" will wind up with their freedom of information facts rammed up their asses
and the airline industry will get more planes flying over your homes,
They are far bigger than "Quiet Skies" and their 1960s style hippie demonstrations on the Sheep Meadow in Central Park.
It is all of your elected officials who should be spearheading this fight along with "Quiet Skies".
Where are they? Probably in the pay of that international lobby organization that promotes tourism and travel.
I forget their exact name.
But, there it is. You are fighting an international lobby group! Lot's of luck, though.

More planes flying due to computerized technology means that IF THERE IS A GLITCH, there is more likelihood of a plane falling in your backyard. Oh, you shout "NIMBY" but try using your time squeezing your lazy crooked politicians...like PAUL VALLONE?
Does he not represent a large swath of northeast Queens?
Then SQUEEZE HIS BALLS UNTILL HE SINGS SOPRANNO to get off of his ass!
Don't like my bad language? You will like it far less if your nabe becomes what Howad Beach has been for many decades...
AN APPROACH TO A RUNWAY!

"The Councilman Who Wouldn't".
A very short scene.

Constituent:
"I'd like to speak with councilman Vallone, please, regarding airplane noise".

Staffer:
I'm sorry ,councilman Vallone is busy on the phone".

Constituent:
"Tell him that I am one of his developer contributers and that I plan to build a multi story luxury structure,
but it's in the middle of an LGA flight path".

Staffer:
He will be right with you as soon as he finishes his conference call with Wun Hung Lo development corporation".

NextGen must be stopped or altered to relieve the noise and pollution.
Anyone reading here remember the flight patterns can and will changed affecting neighborhoods that are not now under the jets. You can be next ...