DeBlasio has no problem spending taxpayer dollars to hide info 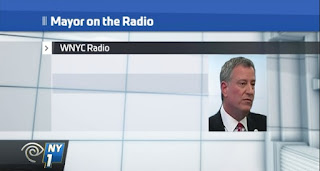 Mayor Bill de Blasio says he is prepared to go to court to fight a Freedom of Information lawsuit filed by NY1 and the New York Post.

The battle centers on the mayor’s refusal to release emails with five outside advisers known as "agents of the city."

Speaking on his radio program Friday morning, the mayor says he is doing everything above board.

"In the case of anyone who also happens to have clients, any specific request around the work they did for their clients, and if in any way that interacted with City Hall, that we would release right now. We have no problem with that. But not ongoing discussions where I'm seeking advice from a private adviser. That's something we believe was appropriate by the legal guidance that we received, and of course we'll defend that in court," de Blasio said.

Those shitbirds at Berlin Rosen, and other similar shitbird and wormtongue firms like Hilltop are the catalysts for sustaining the gentrification industrial complex and perpetuating his failed and clearly bogus affordable housing plan. Which in reality is the affordable luxury plan.

He is also spending our tax dollars protecting that killer retard goon cop Panteleo from S.I in similar shady and abusive fashion.

Big Slow is teetering on the ledge and he is running out of piggies.

Agree transparency!
This is what this mayor said but do not see it.
See increase of quality of life issues of graffiti and people freely smoking pot out in the street.
More pan handling and if you buy them food they refuse want the $$$.
Ruining neighborhoods.
You will be a one term mayor. Crooked all the way. The truth will come out.

Best of luck to them.

The emails were probably on HiLIEry Diane Rodham Clinton's server...

Unless they took an oath they are not Agents of the City.

How much $$$ does he have in an offshore account after the Rivington House deal??

Garner is dead because he was morbidly obese with numerous health problems.. If he would have run from the cops ,it would have been the same result.

Now, what difference does it make for any 300% fake politician to take an oath of public office that is completely disregarded, much less enforced (like everything else that is left to rot in this heaping pile of raw, political NYC sewage)??

These empowered idtiots have NEVER lived by the rules——they make their own!——and, the public be eternally duped, bilked, scammed and damned! The whole city and state govvernment system is entrenched in corruption that is so completely systemic, that it now DEVALUES all honesty itself——to pathologically treasonous, traitorous and ruinous effect!

Face it Queens Crappers, government tyranny and anarchy are the new, foisted laws of the land of the UNITED STATES of ENTERTAINMENT——the new, official gateway to 'The Fourth World,' and Iron Curtain 2.0 (this time 'round on the 'OTHER' side of the Atlantic)!

De Blasio reflects the voters who support him. He wants to penalize successful people and redistribute money to individuals who vote for him.

You elected him...now live with him.
Duh Blasio did not get my vote.
Neither did hissy fit throwing , loud mouth Clairol Chrissy Quinn!

None of these so called "agents of the city" were paid by NYC. But they did get paid and this is how. From the NYTimes:

http://www.nytimes.com/2016/05/20/nyregion/de-blasio-pressed-to-clarify-new-adviser-role-agent-of-the-city.html?_r=0
None received payment from the city, the mayor’s office said. But with the exception of Mr. Gaspard, each represents a firm that got large payments from Mr. de Blasio’s political nonprofit, the Campaign for One New York, now at the center of several inquiries into the mayor’s fund-raising efforts.