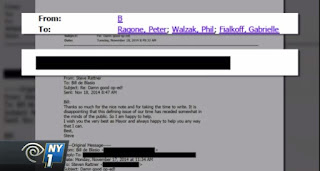 NY1 and the New York Post have sued the mayor over his refusal to turn over emails between top city officials, including himself, and Rosen.

In this case, though, the city did turn over some e-mails to NY1. But while we received 87 pages of e-mails in all, we learned that when the mayor had something to say, it was often blacked out.

When de Blasio sent a New York Times story about stagnant middle-class incomes to top city advisers, Del Cecato and his wife, Chirlane McCray, his note to the group was redacted.

It was the same with a New Yorker story about Hillary Clinton that he forwarded to his wife and Del Cecato. The mayor's message is blocked.

"These emails show how ridiculous it is to designate these consultants as agents of the city," said Dick Dadey of Citizens Union. "These emails, in particular, are benign. They are talking about political stories and news stories, and for them to be protecting the mayor's comments just shows how ridiculous this whole matter is.

De Blasio's handling of his emails have also raised complaints that he is failing to live up the transparency promises he made as a candidate for City Hall.
Posted by Queens Crapper at 6:36 AM

Transparency in government?
LMAO!
The only way to let the light in is to break some windows to let the sun in.
FIOL them. Sue the sons of bitches if necessary!
Or....revolt.
I am not advocating what's going on in Charlotte, North Carolina.
Hmmm...that is not the way.

Because every thought that comes into Mayor Big Slow Slope Dope's brain is morally bankrupt.

This Rosen douche and those other bastards must be some kind of lowlife creeps if the most benign word would incriminate them.

The only thing transparent about this administration (like every other before it), is a never ending cycle of intense incompetence, cronyism, nepotism, lying, cheating, stealing, cover-ups, kickbacks and payoffs, among total arrogance, chaos, hyper-dysfunction--and profligate, wanton waste and mismanagement! On THAT you can be sure!

And, now another indestructible turd that simply won't flush is coming back: It's Czarina Christine Quinn, fresh from her Harvard University crash course in ethics and public integrity, inching her squat, extruded body back into the mayoralty. With already failed leadership like this, it's no wonder that New York City is DOA! It's time for ALL political corruption to be made a capital offense!

There's transparency in the DumBlasio administration. We can see right through him!!!

Transparency starts at your community board.
Mine , CB7, is as opaque as can be.
How many secret meetings go on there?
Is their zoning chair up to par?

"he is failing to live up the transparency promises he made as a candidate for City Hall."

a politician failing to live up to campaign promises? say it ain't so...

Hmm....ask to see the Vallone's redacted material.
How do you spell political mobsters?
V-A-L-L-O-N-E!
The success of big politics depends upon divide and conquer.
Pit one nabe against the other...let's say Douglaston against Astoria....then the voters lose.
Doug Manor folks will sell out Astorians and vice versa.
Why?
Because a local pol mobster will coddle one over the other. One gets and the other does not.
Anyway, WTF does the east and west of Queens have in common with the other, as its residents often say.
Plenty!
United we stand. Divided we fall!
Remember the old worn out United Civic Congress?
They changed their name to Queens Civic Congress to imply unity.
Well...where is it? This remains a divided borough. And that is why the Vallones, the Staviskys, the Crowleys can have their way with you and yours.
WISE UP , OR CONTINUE TO BE BUGGERED GOOD AND HARD!