Just toss the homeless wherever it's convenient 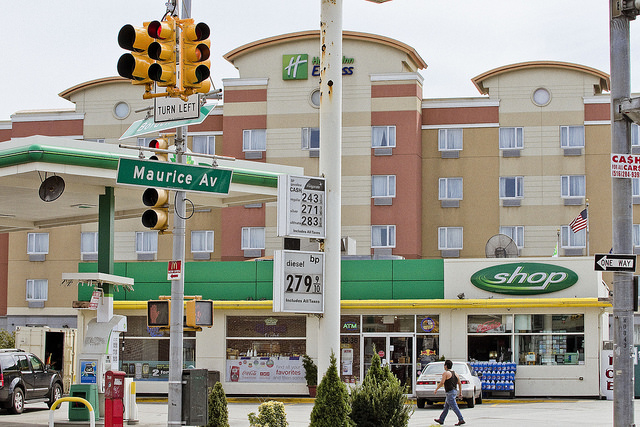 As stated in yesterday’s post, my objections to the placement of this facility revolve around the actual location of it, which I honestly believe to be a violation of the human rights of a vulnerable population.

The Holiday Inn sits across the street from the Long Island Expressway, which produces a standing wall of high decibel sound. While I was shooting the shot above, I actually called a friend, whom I could not hear even though my headphones were in – and she could barely make out what I was saying despite the fact that I was shouting into the microphone.

This gas station with a convenience store is directly across the street from the hotel, and would presumptively fill the role of a supermarket for purchasing food and other existential necessaries. As is the case with such locations, everything you can purchase within is priced as high as the market will bear, and food items available are typically highly processed food stuffs designed for a long shelf life.

I guess the Mayor thinks that microwave burritos are good enough for these so called “Homeless” he’s planning on exiling to industrial Maspeth.

Is it smart to exile a vulnerable population in an industrial zone found along an elevated highway that carries close to a half million vehicle trips a day and which produces an ear shattering din? Is it ok for these people to be exploited by a check cashing location, and to have to make a choice between eating convenience store food, Chinese take out, or at McDonalds? Or, is it just expedient?
Posted by Queens Crapper at 6:44 AM

That location is very dangerous for pedestrians. With so many young children running around, the mayor is asking for trouble. Or does he really care?

Well, can't they grow tomatoes and eggplant in the nearby cemeteries and then can them for the winter? C'mon use your heads.

And btw, why does Mitch Waxman's excellent Newtown Pentacle blog have to do all "the heavy lifting" here? Gratis no less. Where's the rest of the 4th estate on this?

You have to expand beyond Middle Village-Glendale-Maspeth.

While you are exposing all this bullshit --- the politicians are creating puppet 'civics' around the borough - "Old Astoria Civic" is pushing for the $30 million (and counting) Vallone Entertainment Center for the former diving pool and Jimmy No Braner is creating a civic around Court Sq inviting a developer and city planning (in addition to himself) at its first meeting.

These groups will get funding and generous press coverage that will lure in the gullible.

If you can figure out how to short circuit this process, and win over those communities, you might stand a snowballs chance in hell with these protests. If not, they will fizzle out as you batter your heads against the brick wall of silence -- while the pols and their lapdog press drown you out with their staged dog and pony shows.

If I am not mistaken the nearest grocery stores are the Maspeth Supermarket located on 65th place on the Plateau, Key Food and Stop&Shop way up on Grand Avenue.

Also, how many of the proposed homeless will try to enhance their government checks by panhandling on the corners of Maurice Avenue and the LIE service roads?

They will need a good pair of sneakers to walk around here. Parking on the Avenue is horrendous and getting a muni meter to take your quarters even harder to find. Some are broken. So you have to walk. Walk to the bus stop, food stores and any other business.
Can not wait to see the pan handling begin by Oneills as they hold the door open for you as you enter. It happens at Georgia diner on Queens Blvd.
The McDonalds on Queens Blvd is packed and with all the screaming kids running around the restaurant because they have a play area you can not enjoy your food.
The McDonalds next to the hotel just started the kiosk ordering. Remember 30 minutes to sit there while you consumed your food. No flop house.
The noise levels have increased.
A man died down there on his bike.
Crossing the service roads are dangerous and the panhandling will increase.
Oh the Dunkin Donuts is always busy there.
This administration does not care about these people. They just want to be known as giving these people a room. Another one off the street.
No kitchens so they will have to go out and get food.
Right now the weather is agreeable but wait till it's snows. Good luck. Maspeth was forgotten in January with the snow plowing.

Stop electing real estate industry stooges for your local representatives....council members, etc.
Most community boards (CB1 & CB7 being among the worst) are useless.
They are crammed full of bobble heads. A lot of these wannabees actually think they are important enough to have power.
The only CB members with brains are those looking to run for office.
What is the use of a NYC government body whose votes are only advisory?
The term "toy government" keeps on popping up on this website.
I have to agree that this is a perfect description.

P.s.
Yes, George, locating the homeless next to a cemetery sort of says, Die already, and get out of our hair"!
As long as these unfortunate people are hidden from public view....MEANING THE TOURIST CORRIDER....
the problem has been solved? No?

You would think there must be one honest person with a conscience who could blow the whistle on the DHS and their Friends and Family program? Come out, come out where ever you are!

Love this reporting on Maurice Avenue. I wish the reporter came out during the craziness of rush hour and see how the area is. It is congested. That is just by the service roads for the LIE and BQE.
He should show going down Maurice towards Tyler Avenue. The factories with all the trucks all over the place.
Parked in the center of Maurice and it is so congested and dangerous.
The gas station with Dunkin Donuts at times are very crowed with trucks filling up and the line for the car wash can extend up Maurice.
Then do a piece at night when it is a ghost town
and the drag racers are out. Almost all night on Fridays and Saturdays you hear them.
Maurice Park at 151pm on Wednesday not a soul in there but that will change once the proposed shelter arrives. The new day area for these people.
Panhandling and arguing with the neighborhood bottle and can guy and or girl.

"...locating the homeless next to a cemetery sort of says, Die already, and get out of our hair"!

they will be alot by O'Neill's for sure -

Why don't greedy home owners lower the rent and make it reasonable. We'd have a lot less homeless people in the area.

they may be Syrian refugees /middle east illegal aliens

"Why don't greedy home owners lower the rent and make it reasonable. We'd have a lot less homeless people in the area."

Why does the City, State, and Federal Government NOT lower our taxes and make it reasonable?

And why do you not take some of these unfortunate souls into your own abode?

Do you not realize that New York City is a sanctuary city?

Our Police CANNOT EVEN CHECK IMMIGRATION STATUS WHEN THEY ARE ARRESTED!

Illegal immigrants can even vote!

The elected officials we have are so so useless and horrible that to be re-elected they must continually import an endless amount of leeches and locusts who are given unending free benefits so that these morally bankrupt politicians can be voted back in...

Lower rents? LOL!
The middle class will be homeless too, and very soon.
The real estate taxes keep on escalating to the sky.
Only the wealthy foreigners who want an NYC address will be able to afford living in the big rotten apple ,which is controlled by REBNY.
They call the shots. They buy the politicians. You pay their prices!
Fuck 'em all in the tookas.
Purge you crooked politicians.

So with this influx of people added to the area. Will there be SHcitibike stations for their convenience and new bike lanes painted on those backstreets?

Lower rents is a good idea. You see these people charging 2200 a month for a 2 bedroom in Maspeth is crazy. Last time I checked property taxes weren't 26,400. We do have greedy home owners in Maspeth.

Ironic that in this morning Daily News on an article about Trump and stop & frisk:

REALLY, this coming from the elite deBlasio of Park Slope, where there are no homeless shelters, auto body shops with cars up on sidewalks and on streets, no illegal truck driving on his block, etc. I mean when was the last time deBlasio was in Jamaica, specifically South Jamaica, or South Ozone Park or any part of SE Queens to see what people there deal with on a Daily basis.

Just because he has a black wife and mixed children DOES NOT mean he has a connection to black communities, because HE HAS NONE. Just ask folks from Jamaica.

AND this is the problem with most elected officials. They live safe in their ivory towers away from the maddening crowds and have no idea just what regular people deal with daily. All elected officials should take 5 days a month to walk all over all of the communities they serve, every single inch of space and see REALITY & TRUTH.

That is how you serve, that is what makes you a public servant instead of a buffoon elitist serving your self interested, friends, lobbyist and developers.

HYPOCRITE To the max.

Isnt there another Hotel right across the Highway? The hotel that faces the graveyard, is it being used for a shelter as well? That hotels view is straight out of a bad dream!