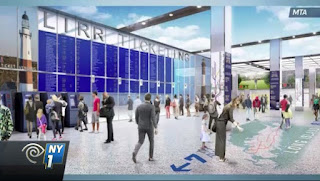 With its low ceilings and cramped corridors, Penn Station is anything but beloved by train travelers.

"It is decrepit, and it's an affront to riders who use it," said Governor Andrew Cuomo. "Well, why are you so negative on Penn Station? Because it's terrible!"

The $1.6 billion renovation would move Amtrak and the Long Island Rail Road across Eighth Avenue into the Farley Post Office Building, to be renamed Moynihan Train Hall.

"New York will not have seen anything like it in decades," Cuomo said.

As part of the plan, the cramped concourses inside the existing Penn Station will be renovated and expanded to ease the space crunch for commuters.

"Right now, it's about 25 feet wide, so everybody's channeled in that cattle-call area," Cuomo said.

Cuomo says all the needed approvals and funding have been obtained, and that after decades of delays, the dream of a new Penn Station will finally be realized.

"I don't announce plans with caveats. This is what is going to happen," Cuomo said.
Posted by Queens Crapper at 6:44 AM

A cattle chute tunnel it is.
Still, it beats riding the f-----g subway!
Damn the extra cost of the LIRR, but that's my sane alternate choice.
Imagine me joining the throngs of commuters at the #7 Main Streeet station during rush hour,
after a 25 minute ride on the bus?
No thonx! I'd rather move back to the Bronx!

Gag! The #7?
Half of the unwashed 3rd world, slurping noodles for breakfast and spilling liquid on the train floors?
Not for me either.
I board the railroad in Bayside.
I's a more civilized ride and worth the extra price.
They should have never torn down the original Penn Station.
FYI:
Shea, of the former Shea Stadium, was the lawyer who represented those who tore down the late great old Penn.
It is only fitting that the new stadium not carry his name.
Thus, he was also obliterated from history, except for an electrical substation on the LIRR tracks near City Field.

How will they prevent it from becoming the Moynihan Homeless Shelter?

whats sad is that the original Penn Station Building was so beautiful before it was crapitized in the 60's.

seems America has been running to the lowest common denominator for a llooooooong time.

This is the result of infinite 'money' where there is more incentive to destroy beauty and replace it if there is the ability to catalyze 'growth' with fake economic stimulative activity.

Now, I'm patiently waiting for Preet Bharara to unveil HIS OWN plan to slap this protected, gubernatorial goon with a cold pair of wrist bracelets that is long overdue, as New York State residents continue to languish in public squalor, beggary, obscurity and quiet desperation that is unprecedented, to date. Cuomo and his henchmen have never stopped behaving like depraved, unresponsive tyrants, for which we have all payed a soul-crushing price.

If only the wheels of justice would speed up to keep pace with the entrenched crimes of this Albany predator, perpetrated by his own monstrously failed leadership, whose claims to ironically clean up Albany are worsened only by the fact the the filth, dirt, corruption, graft and greed that he portends to clean up, all stem from the SAME corrupt breeding point of the governor himself! (It's the reason for why he abruptly abolished the Moreland Commission in 1994 at the exact time that they were preparing to investigate the governor.)

In the end (as in the beginning), bright, streaming, gleaming sunshine is needed to break up the permanent cloud that hangs over Albany's haunted State Capital compound——the best political cleansing agent of them all!

ALBANY DOESN'T GIVE A SHIT ABOUT THIS CITY BUT THEY SURE AS HELL LOVE THE $$$$$ THAT WE GENERATE IN REVENUE/ NO OTHER CITY IN THIS STATE CONTRIBUTES AS MUCH AS WE DO !!

Correction: Andrew Cuomo abruptly abolished the Moreland Commission in 2014, not 1994. My apologies for any inconvenience this may have caused to Andrew's Albany 'Friends & Family' payroll henchmen for which everyone else continues to pay the price for their unwavering greed!

Yes, Cuomo knew the Moreland Commision might come too close to uncovering him, so it was shut down.
They were getting too close to some of Andy's crooked friends. The next stop might have been the slammer for Cuomo.

After the Buffalo Billion implosion, this fucking governor has no credibility and should not offer any plans to improve this city. Especially plans that will fail to be done on schedule. Look at the 2nd ave line and that 7 train station at the hudson.

OUR GOVERNOR IS PATHETIC !!

I love the way folks complain about the 7. Take the 4,5,6 everyday and then talk to me about the third world, or even our first world vermin that ride it.