DeBlasio's Evil Empire has its sights on Maspeth

From DHS (Current Requests for Proposals):

In order to meet its legal obligations DHS maintains an open-ended Request for Proposal process through which non-profit social service providers submit proposals to augment capacity. Although DHS does not target specific areas to open shelters, the agency strives to keep families near their communities as much as possible. This is an open-ended request for proposals, therefore, there is no prescribed due date for submissions. All suitable proposals will be reviewed by the agency on an ongoing basis as received. Non-profit social service providers may submit a proposal to develop and operate the following:

Ok, so the social services provider makes a deal with a building owner and then applies to the DHS for a contract.

When the city was asked how it can go into business with Harshad S. Patel, who had bragged about bribing a state senator in the past, they told the following to channel 11: 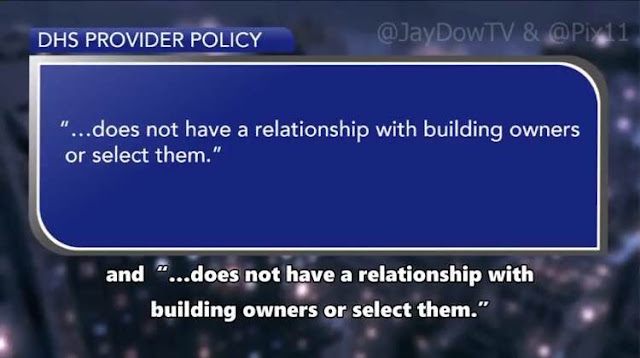 This jibes with what it says on their website.

So then how can this be?

The Department of Homeless Services says negotiations to convert a Queens hotel into a homeless shelter are ongoing. This comes after the Holiday Inn Express in Maspeth tweeted last night saying it’s confirming “the hotel will not be converting to a shelter as suggested.”

A Department of Homeless Services spokesperson told the Chronicle in a brief phone call on Friday that "negotiations are ongoing" between the city, hotel owner Harshad Patel and service provider Acacia Network. Just one day earlier, Patel told the Chronicle in an interview that the proposal is 100 percent dead.

Why is the city pressuring the hotel owner into a contract with Acacia Network, when that's not how the process is supposed to work?

Bill de Blasio desperately wants a shelter in Maspeth and his Evil Empire will do whatever it takes to make sure that happens, even if it means breaking the rules and making sure the city contracts with a crook. The question is, which stable, working class neighborhood will be next? (Looks like it may be Corona.)
Posted by Queens Crapper at 5:50 AM

They're building one on Steinway Street. Oh wait. That's going to be a hotel. Well, that's what the city said.

Say it is not so.

Why not build a shelter in park slope? Or across from city hall?

The NYC Department of City Plotting (it's real name)....NOT CITY PLANNING.....in concert with other municipal departments....
has already identified neighborhood's which are to be preserved as prime residential neighborhoods.

They have likewise tagged other neighborhoods, such as Maspeth, certain sections of Astoria, College Point etc. in Queens as DUMPS for projects , homeless shelters.....that will not dare be located in leafy northeastern Queens.

This policy of CONTAINMENT has been going on for multi decades.
No one dares speak of it. Most likely, YOUR OWN COUNCIL MEMBER allows this!

They only REALLY EFFECTIVE way of combatting this is to make sure that you elect a representative that is TRULY
dedicated to representing your best interests as a whole.

Does your gov't rep really represent you, or the NYC real estate industry, decelopers and builders....who strip,mine your nabes then move on.

My particular councilman , Paul,Vallone, is employed by the real estate industry. He is a developers' lobbyist.
They come before you and me. They write his retainer checks. He moonlights as a councilman. But his real job is counsel to developers.

Get smart. Dump Vallone-y baloney....or get more of his do nothing for real for us for another term.
Can we afford Vallone for another term and watch our quality of life take another hit?

That bogus deed restriction registration bill of his is pure window dressing. It makes Vallone look good to the gullible voters, but the expense of defending deed restrictions (I.e. Ricker Finlay covenants) is left up to,you homeowners.

Recognize this charlatan for who he really is, a machine phony...Phony Vallone-y...or suffer more long years of neglect.
Sure...he throws a big Fort Totten Independence Day fireworks show. Meanwhile he pulls his punches when he is supposed to,be fighting for you!

This has become very personal for Mayor Big Slow, Weasel Banks and Lowlife Lincoln. The state of the city is more perilous with these vindictive bastards in control. It can't be more transparent (maybe this is what Big Bird meant) that they are using their civic duties to enrich themselves.

Markey's failure has not deterred them at all. It's such a desperate digging for legalese and loopholes to get this warped and inhumane plan done. If only these worms had the temerity to go after their real estate developer and hedge fund overlords to build legitimate affordable housing in these neighborhoods. Maybe this could have been remedied if our fuaxgressive and neoliberal mayor would have undone all of the previous mayor's corporate welfare zoning giveaways.

Steinway Street?
Perfect location.
This is , and has been for a long time, a nabe in decline!
It ain't coming back.
Time to move where Pete Vallone Sr. lives.
That's the good part of Astoria.

The only real controls over what we have is to live in the fight places and make sure that our council members support that place.
Anything else is just whistling past the grave yard.

See how a mentally ill mayor can be easily manipulated?
Everybody knows his family's med history, and the meds that duh mayor takes.

I'd like to see Bill's medical reports....never mind Hillary or Trump's.

Poor Masoeth.
It seems to be their destiny to get shit on.

But....BRAVO....you showed those sons of bitches that you cannot
easily dump a homeless shelter there.

Act up! Get results!

The polite northeast should take a shot of B12 and get more active like their Masoeth brothers and sisters!
Not with some of the polite "church ladies" they've got loving the status quo.

Don't make any waves. Be content with being Vallone slaves.

Oh, Mayor Big Slow, maybe you should refrain from the usage of plausible and outright deniability, it's starting to wear thin and outlived it's usefulness.

Just proves the machine control over us is a house of cards done by fear and intimidation.

If everyone stood up and said 'NO!' it would fall apart overnite.

Questions to ask...How many of these people are citizens? Residents of NY? How many are illegals?
At the Pan American some say they are out of state? So their home state could not help them out? Or is the benefits here in the city better?
Anyway the taxpayers are paying for this in every way imaginable.
What we need is one huge protest/rally over this. Have all the communities begin marching up Queens Blvd to the Queens Borough President's office. Show her how we Queens residents are not happy with this. Talk about making an impact on this! Can you see the traffic nightmare this would create!
Something to think about! She does not come to us so we will take the fight to her!

When those two creeps with Dum Blasio start eyeballing your nabe it's time to use Alinksy's 12th rule.

* RULE 12: Pick the target, freeze it, personalize it, and polarize it.” Cut off the support network and isolate the target from sympathy. Go after people and not institutions; people hurt faster than institutions. (This is cruel, but very effective. Direct, personalized criticism and ridicule works.)

I would compare deBlasio more to the Dark Helmet character in Spaceballs than to Darth Vader...

My favorite Twilight Zone episode of all time is "The Obsolete Nan". Mayor Diblasio should take note and realize that he is in the same predicament as Burgess Meredith.

It's all about electoral blockbusting.

It's official: The de Blasio Administration is now a lawless empire of systemic, entrenched corruption, graft and endless greed that can be effectively summarized as: 'CRIMES WITHOUT CRIMINALS!'

❝It is dangerous to be right when the government is wrong.❞ ——Voltaire

How to create a social state from ❝The Rules For Radicals,❞ by Saul Alinsky:

There are eight levels of control that must be obtained before one is able to create a social state, and the first rule is the MOST important:

1/ Healthcare - Control healthcare and you control the people;
2/ Poverty - Increase the poverty level as high as possible; poor people are easier to control and will not fight back if you are providing everything for them to live;
3/ Debt - Increase the debt to an unsustainable level. That way you are able to increase taxes, and this will produce more poverty;
4/ Gun Control - Remove the ability to defend themselves from the government. That way you are able to create a police state (currently in active progress);
5/ Welfare - Take control of every aspect of their lives (food, housing and income);
6/ Education - Take control of what people read and listen to - take control of what children learn in school;
7/ Religion - Remove the belief in the God from the government and schools;
8/ Class Warfare - Divide the people into the wealthy and the poor. This will cause more discontent, and it will be easier to take (tax) the wealthy with the support of the poor!

So, does any of this agenda sound like what has currently been FOISTED onto these UNITED STATES OF ENTERTAINMENT (and the new, official gateway to 'The Fourth World,' and Iron Curtain 2.0——only THIS time 'round, it's on the 'OTHER' side of the Atlantic), as the corporate fascist oligarchs themselves have rolled back the labor, wage and living standard clock to 1940 all over again—compliments of a bought, totalitarian monarchy-dictatorship rule of an American government of epic, humanitarian (and ecological) fail!

Watch for new "hotels" to pop up all over Queens in the next two years. Watch them change into homeless hotels. Continuing the metamorphosis, watch the homeless eventually get thrown out in favor of all the Syrian refugees that Obama promises to take in. A large population of them will want to settle in New York. We have the best benefits, i.e. Food Stamps, Free Housing, Free Education, Free Healthcare. Oh, and WATCH your taxes escalate astronomically.

The City is also converting two hotels in Bellrose -- owned by PATEL!

Heard this a long time ago....NYC will be for the very poor and the very rich. The middle class will be out of here.

Definitely NOT the same. No parallels at all.

It's long overdue to make ALL political corruption a capital offense. And, why does every NYC resident still believe that they must wait until this intensely incompent (and lethally dangerous) asshole de Blasio's term ends? Why not impeachment NOW?