Avella, along with Grodenchik and Nassau County Assemblywoman Michaelle Solages, announced Friday that the owners of the controversial the Quality Inn in Bellerose, targeted for most of the summer to become a shelter, are looking to end their relationship with the homeless agency and scrap plans to house the homeless, effective Jan. 1. This is the second hotel owned by the Patel Group that has promised no longer to serve and house homeless people.

Coincidentally, this is the same hotel that PIX11 News exposed last December. Back then, homeless services was booking rooms for $175 a night — yet PIX11 was able to book them on their corporate site for significantly less.

Homeless services leadership has not responded to numerous requests for comment during the past month.

Patel has 2 hotels on Jericho Turnpike that he converted into shelters. A protest today will visit two of them. 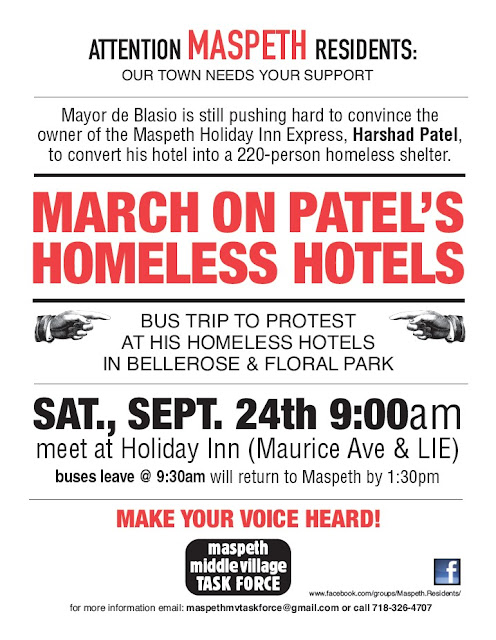 Posted by Queens Crapper at 6:41 AM

Patel makes his money on the backs of the homeless' misery and taxpayers.

$175 a night?
Patel is running an industry on the backs of the homeless.
Crappy conditions topped with us taxpayers footing the bill.
The message has got to go out.
This overbuilding of hotels that are failing, cannot be filled with the living bodies of the homeless.
The same goes for empty residential units filled with section 8 people.
Vacancies are the owners problem.
If he made a bad ficking business decision, then let him eat his own shit, not have NYC bail him out at $175 per night!
Fuck you , Patel! In spades!
Please join Maspeth's fight or else this kind of crap will move into, what you thought was safe, your own neighborhoods!
Mayor Duh Blaz does not give a crap , except about getting re-elected. Fat chance Der Wilhelm!
Vote this scurvy piece of double talking crap out!
And make sure that you do not replace crap with another steaming hot piece of shit!

So there are a thousand more homeless people. In the span of a month. Something like this should scare the shit out any resident here living check to check, but it's clear that these unfortunate people are being imported by other states with sadistic policies against the destitute.

Patel is a poverty pimping creep and a stupid idiot businessman. I wonder if he bought in to all that Lonely Planet propaganda from a few years ago about Queens being a world's borough and thought tourism would spark in hotspots like bellerose, maspeth, and floral park, places with no forms of mass transit except for buses. But judging by this sudden act of conscience and refusal to the repeated badgering by our corrupt mayor and the DHS, He now knows what the ramifications will be. Soon enough, if he doesn't get charged with anything, he's going to bail out of Queens.

By the way, wouldn't this naked aggression being displayed by Mayor Big Slow, that weasel Banks and probably that hipshit Restler be better spent be directed to the mentally ill overlords on the REBNY board so that low income housing can be built for this burgeoning population and better environments for the poor that have been living and suffering here in the 5 boroughs. Instead of this fraudulent affordable luxury housing scheme which in actuality is a market rate housing project program. (again why would people making 6 figures would need govt aid to find an apartment)

But it's just easier to ruin towns and devalue the worth of people's homes whilst they continue to pay ballooning property taxes in congruency with the amounts idiots are paying to live in hastily and shoddily built condos for millions of dollars.

Good luck Maspeth and others in solidarity that will march. Occupy all streets until Patel's head explodes or certain elected hacks get indicted.

During WW II, 110,000 men, women and children were temporarily housed by the Federal Government. Why can't that be replicated in 2016?

Check it all out HERE.

How many do you plan to personally house, George?
Thanks for the WW II history lesson.
George LOVES to show off his "Book of Knowledge" knowlegdge.

1. homeless shelters must be equally distributed in every city council district and it is the responsibility of your councilman to make sure this happens. no excuses or bullshit.

"homeless shelters must be equally distributed in every city council district"

Oh bullshit, stop electing (and re-electing) these progressives assholes in bed with Obama looking to re-engineer every aspect of America -Our lives included.
The city wants and actually LURES these homeless people to get the federal bag money the president is handing out to CRUSH neighborhoods the president feels are too upper middle class, white or district's democrats are loosing.
Its called "Affirmatively Furthering Fair Housing" which bribe's city's into busting up and diversifying the "outer" communities.

This is a good 80% what this bullshit and god help us if Clinton II is the next president and gets to appoint 2 supreme court judges. Progressives like the mayor who are sure to allow more shit like this to be rammed down out throats. Only next time at federal level gunpoint with no chance of fighting it.

All should have a good read here !!
cut and past this link to a browser.

Do think that Mr Petel and a Ms Crowley staffer deserve a place on the board? If so, issues would be so much smoother for all concerned.

Absolutely!
Take your demos to the perp's front door!