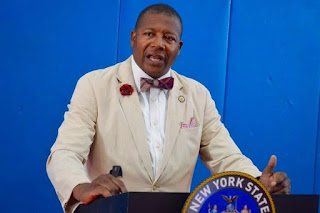 Sanders, a former city councilman who has been in office since 2013, received nearly 57 percent of the vote, according to state results. He has wide name recognition in the district and secured a number of labor endorsements.

His challenger, Adrienne Adams, chairwoman of Community Board 12, picked up more than 41 percent of the vote.

Sanders won even though the Queens County Democratic Party backed Adams after he declared last year that he was planning to challenge Queens Rep. Gregory Meeks this fall.
Posted by Queens Crapper at 7:09 AM

That is a completely false statement. The Democratic Backed crooks always win. Even though Sanders wasn't backed due to a fall-out with the machine, he has name recognition for better or worse. That is why he won. All the other DEM backed hacks in SE Queens won, including that life long wasted crook Vivian Cook.

I mean where do you get your misinformation, from Trump ("I heard").

Sadly, my family and I casted 'blank ballots' in yesterday's rigged primary that are symbolic of our anger and disgust with yet another 'cradle-to-grave hustler like James Sanders, because of the gerrymandering that FOISTED this 300% fake, intensely incompetent imbecile onto southeast Queens in the first place, for whom he never even paid attention to his constituents at all when he was a vapid councilman——and, now he's been promoted and rewarded for monstrous, humanitarian fail!

So, I was an inspector at the Board of Elections, where I saw the lowest voter turnout in the city's history, mainly because of how gerrymandering is dishonest and unethical, and that is ON TOP of an electoral process that not only betrays all pretense of honest, ethical, inclusionary, not for sale leadership (that leads by example), but now the whole corrupt process throughout Albany and City Hall completely DEVALUE all honesty itself, as the grinding loop of corruption, graft and endless greed simply continue to roll along, uninterrupted like they always have——by all openly practicing criminals of purported public service, without consequence (where the consequences for their graft are forever vistited on we the taxpayer), or as I like to correctly call the entirely sordid practice: 'CRIMES WITHOUT CRIMINALS!'

And, as long as it's 'business as usual' in this game of political thugs, then brace yourselves for higher and highest taxes, as taxation without representation continue to destroy this once great, independent and self-reliant state to smithereens (currently in mid level progress), compliments of one of the many, multiplying political scourges like James Sanders, Jr.

Men have been hanged for less——FAR, FAR LESS!

Come on, look on the bright side. this time he will be caught and it will be while he's in office

This, along with Markey's defeat, is a huge kick in the nuts for Joe Crowley. In spite of the fact that Sanders appears to be on Bharara's short list for investigation he got re-elected. What does that say about our candidate choices. Sanders is a crooked buffoon.Who can't get out of his own way...

Maybe it's just a small town in the dirty southeast (named so for it's institutional perpetual corruption in elected office and the consistent perpetual filth on the streets, projectile and human) but this is how dire the state of the nation and the level of cynicism of the constituency is. The only winners in this are not only the hacks who win, but the scum of the earth too. Meaning the recidivist criminals from the gutter to executive offices. This is why we have the the 2 worst and most unqualified people trying to win the white house and the trust of Americans. Lying dying Manifest Hillary and that spoiled crooked trust fund baby punk Trump.

Too bad Dr. Stein barely has a chance. I was going to suggest that the libetarian and green parties should join forces so they can break the 15% threshold and get on the televised debates, but then Gary Johnson didn't know what Aleppo is.

I hear this a lot from our electeds and our great orator president when certain people commit mass shootings and say offensive things: "that's not who we are" or "we're better than this".
Well guess what. We the people, fucking are. We the people, aren't fucking better. So enough of this exceptionalism bullshit. This system needs an enema and it ain't gonna get cleaned up with the same hacks getting elected and enlightening words to mollify the public's hope and faith in government.