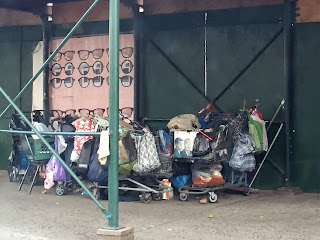 Complaints about homeless on the street have skyrocketed since Mayor de Blasio came into office — with calls to the 311 hot line jumping 127 percent, the most recent stats reveal.

Complaints about shelter conditions? What are they expecting? A five star hotel or something? The government doesn't even fix schools that are in terrible conditions let alone fix a homeless shelter.

Who are you going to believe, DuhBlasio or your lying eyes?

New York City, the place to be!

Play the game and get it all for free...

The problem is solved if Mayor Fugazio says it is, so shut up serfs!

I heard the conditions are like Rikers Island. Maybe queenscrapper should visit one of these shelters and document the conditions with images / video of the visit...

This city won't survive another decade of this guy; on issues like this we've already lost so many of the gains that took two decades to achieve.

Being retired, I have not been to Manhattan for almost 3 years. This past Saturday, my wife and I went into the city for the 2PM matinee showing of "Misery" on 44th Street just east of 8th Avenue.

The walk from Penn Station (LIRR) along 8th Avenue was shocking; there seems to be more people "camping out", loitering, panhandling, and just plain standing around BLOCKING the sidewalk than I have EVER SEEN. It is the worst in front of the Port Authority Bus Station on the west side of 8th Avenue.

Drinking, smoking, cursing, and yelling seems to be the norm. I even saw one woman putting toothpaste on the toothbrush of another man, who proceeded to brush his teeth right there on the sidewalk.

The "normal" people, along with me and my wife, just put our heads down, and keep walking along as fast as we can to our destinations.

Of course, we have to stop at the intersections and wait for the traffic light to allow us to cross, and it seems that it is on the these corners that anyone handing out ANY kind of flyer congregate, as we are almost "hostages" until the light changes.

We had been visiting friends on Long Island, which is why we took the LIRR into Manhattan. After the show, I thought it best to hail a taxi, lock the doors, and hunker down for our ride home to Jackson Heights.

There is no doubt in my still crystal clear 68 year old mind: the city has a serious homeless problem, the likes of which I have never seen before.

I read a blurb over the weekend that Bloomburg was exploring running as an independent for Pres-O-Dent!!!!!!!

You citizen/sheep are just being a bunch of pains in the ass. Just shut the fuck up and listen to the lies from old Wilheim over and over again and will become the truth. Do you understand?

So he can hose us again?

HELL YEAH !! HE SHOULD RUN AS AN INDEPENDENT. HE HAS MY SUPPORT...

Build a homeless shelter on the front lawn of Gracie Mansion. Plenty of room there.
Or they can use De Blasio's townhouse in Brooklyn.

Mario used to count anyone living with their parents as homeless

Hers what you can do: