Lined up at the trough 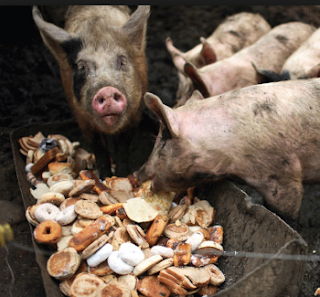 In a stunning move, City Council members are mulling even fatter raises for themselves than the 23 percent boost recommended by a mayor-appointed panel, sources told The Post Wednesday.

The 51-member council on Feb. 5 is expected to push through a hefty raise package for all elected city officials that could include boosting council members’ salaries to as high as $150,000, the sources said. The council is also expected to approve Mayor de Blasio’s controversial plan to shrink the carriage-horse industry and move its entire operation within Central Park.

A three-member panel convened by Blasio last month recommended council members’ salaries rise from $112,500 to $138,315 and that Speaker Melissa Mark-Viverito get a 37-percent pay hike to $154,375.

But some council members have privately griped about wanting higher raises — which would be their first since 2006 — because they’re being forced to give up annual “lulu” bonuses of $8,000 to $25,000 each for chairing committees.
Posted by Queens Crapper at 7:29 AM

Some council members are already receiving 2 (Two) pensions also known as double-dipping. For shame! For shame!

If Preet ever gets around to delving into the brazen political monetary and civil service glad handing going on 5 blocks away from his office, the extra lucre will come handy in defence of their hopeful future indictments and court proceedings.

Well it seems only fair, the burger flippers are getting fifteen dollars per hour.

And the snow shovelers get thirteen dollar s and fifty cents, before taxes...

"A three-member panel convened by deBlasio last month recommended..."
- - - - - - - -
Anyone knows the names and occupations of the 3-member panel? who are they?

What's the matter...council members like mine, Paul Vallone, is not getting enough side money from his developer clients already in addition to his law practice? If you men and women council members do not like your job, or its pay scale, resign! You have already got it damn flicking good as it is already. Look at all of the cash Van Bramer has pocketed from deveoper's turning LIC into an over developed under infrastructures mess that it is! Oink. Oink. Oink. Pigs!

They should raise the amount of EBT benefits that they receive illegally while they're at it.

They should't be getting any lulus to do the work that they were hired to perform in the first place (ironically, where they STILL don't work, as a dereliction of public duty is their mantra and calling card). And, if they don't like the terms, then they, of course have the right to relinquish their cushy seats!

And, what's all of this "extra" committee bullshit, anyway, but a way to bilk the system of MORE money for LESS (or, in this case NO extra work!), by tacking on insanely ridiculous committee responsibilities that amount to nothing more than glorified, secretarial work!

Meanwhile, in the grinding injustice of daily life in the REAL world of pay disparity, the city is offering up a grand pay of $13.50 an hour to shovel show, versus $150,000-plus a year for all vile, vapid and vacuous council hacks to shovel more shit our way, with a vengeful impunity!

Now, whatever happened to public referendum to determine any and all salary increases? After all, We The People pay their salaries---but, we have no say??? A public forum that is rigged to fail! That's not democracy, it's Neo-Fascism!

And, if memory serves, former City Council Speaker Christine Quinn held a public hearing in 2009, where the voice of the people who attended (of whom I was one), flatly rejected all salary increases---right before she approved a citywide raise for every council member---and the public be duped, scammed and damned (again)! Who changed the rules, and who are these invisible three to make determinations for a pay increase (when it's clearly OUR job to determine!), while we 'sheeple' are expected to clam up about it and rot?

So, the lesson here is, even when there are public hearings that allow our taxpaying citizens to speak out, they are mere formalities that are completely ignored and rejected, in favor of plans to bump their already affirmed and approved salaries, regardless of whether they were earned, deserved and warranted, as everyone else's 'petrified paychecks' keep pace with 1973!

Make no mistake about it, all New York City duped taxpayers': This is the most egregious, 'taxation with representation' scam that only continues to create even more distrust of city and state government empires of epic, humanitarian (and ecological) fail---and, getting worse by the hour!

Now, hurry up, Preeeeeeet, and finish up your work in Albany (you missed a big one!), and get thee to City Hall forthwith---Boss Tweed is rattling his chains in purgatory!

I'd just love to have a nice cushy job where I can even get to vote myself a raise.
Who's the boss here...the council or the voters that gave them their f-----g jobs?
That's what explains the crappy spot that Queens is always in. The voters, collecively, have a voting IQ of 65.
Can these entitled lazy SOBs!

Anonymous Anonymous said...
"A three-member panel convened by deBlasio last month recommended..."
- - - - - - - -
Anyone knows the names and occupations of the 3-member panel? who are they?

To the voters/locals/residents demanding accountability and fairness.

As we impatient new yorkers (it goes together right Big Slow?) await for the chickens to come home to roost and instant karma on park row.

Now, I ran for City Council in 2003, and the system (and Board of Elections), was so rigged and entrenched with corruption from within, that even my own Executive Committee refused to formally interview me, choosing instead to endorse my opponent (against the cradle-to-grave incumbent), who wasn't even a member of my own party affiliation (he was a Conservative, running on the party line ticket)!

Hence, there was never any spirited primary, since my opponent played an old, unsuccessful trick, by challenging my perfectly good signature petitions in court, costing several thousands of dollars a day (in order to attempt to legally knock me off the ballot), which led to my withdrawal, as well as his third, and final loss in politics (I never expected to win on my first political try anyway, as he was bent on an impossible victory at all cost; I was only running to get the experience of what it feels like to organize and oversee a political campaign that was privately funded, for a possible second run.)

Frankly, there is nothing honest about the entire city council, especially the way it has operated with a complete disregard for the constituents to whom they purportedly serve, over the past 40 years---much less any pretense of ethical leadership that leads by example (as they continue to practice highly 'selective' and 'occasional' representation, in between lunch and a manicure!), and, naturally their primary 'law practice' obligations!

Alas, like every other public, taxpayer funded office in New York State, the entrenched, failed, two-party political machine control and corruption from within, has so completely rigged the system AGAINST the very people whose taxes pay their vastly overpaid salaries (and unearned, undeserved, publicly unauthorized pay bumps), for leadership, accountability and transparency to prevail---only it never does, and never will!

Besides, the 50-year, city council mantra, edict and credo is: Don't Blow MY Scam---And, I Won't Blow YOURS---and, the public be eternally duped, bilked, scammed and damned! I wouldn't last a month in their openly practiced raw sewage plant of epic, humanitarian (and ecological) fail!

The entire City Council, City Hall and Albany devalue all honesty itself!

There should be a referendum where residents get an UP or DOWN vote regarding wage increases for elected officials. How's that for progressive !!

$15 per hour when present and participating in a legislative session.

And they can sign up for Obamacare and food stamps.

Almost sounds like it is too generous, but it is Friday and I am in a good mood...

The problem is not so much the salary but the number of Councilors.

51 Councilors are massively too many. Most have all day, every day free to flitter from one "meeting" (read public relations opportunity) to the next.

The real solution would be to cut that down to about 12. Then there would be a real full time job and then $150K isn't so outlandish. Of course if you had about 12 then you'd have some talented people interested in making change, instead of 51 uber-loons who want to be seen on TV "meeting" with the local complainers.

Now, how does Jill Bright, a Chief Administrative Officer at Conde Nast (whatever THAT nebulous, cushy title means), get to decide public policy recommendations for publicly elected officials' salary and compensation? How does ANYONE get on this de facto commission that was engineered by who the hell knows, in this hijacked, Neo-Fascist City Hall that is holding all city residents hostage to corruption, greed, graft and dysfunction from within?

Isn't it the job of We The Taxpaying People to determine (by public hearing referendum) if any salaries for city council part-timers are to be considered, much less granted?

This isn't democracy---it's government tyranny, by the corrupt, crooked, counterfeit, dishonest mayor himself!

Hence, I urge everyone on this thread (and beyond) to flood City Hall with E-mails (go to nyc.gov/mayor), and question why there aren't any public hearings before next Friday, February 5, 2016, when Czarina Melissa Mark-Viverito is scheduled to hold private meetings to determine even greater salary bumps than what was already recommended by this rigged, City Hall mandated commission?

Otherwise, We The People are being deprived of our Constitutional rights and free speech. Because, no publicly elected official should EVER be able to approve any and all pay raises---that's OUR job, as in the very constituents whose salaries we pay in the first place!

Wake up, Queens Crappers---democracy is getting flushed down the toilet even faster (and far ahead of), all waste itself! Write in to City Hall, protest and demand answers, before this debacle meeting takes place next Friday!

Shave his head and that one pig up front looks like Paul Vallone.
The one with his nose buried, you know where, is Jimmy Van Bramer.
Frame this photo and mount it in the lobby of city hall..

Is time to fix the salaries at a set rate.
No raises, nothing.
Reeks of corruption for one, all the city political positions should have a fixed rate for two.
These fuckers would be all unemployed in the private sector.
Enriching themselves on taxpayers dime.
Bunch of lowlifes.