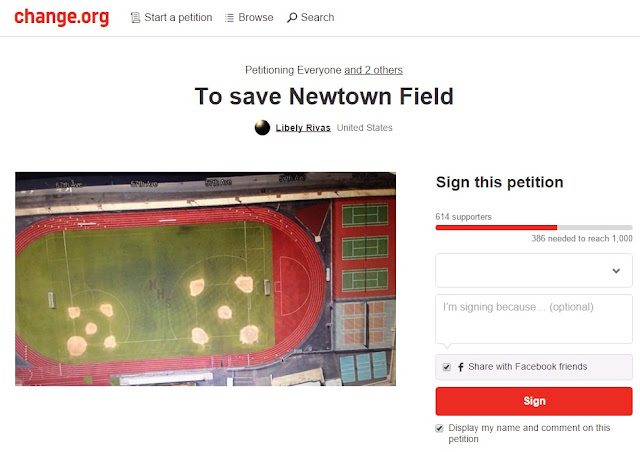 The NYCDOE has proposed a plan to build a Pre-K school on one side of our Newtown Field.We cannot allow the department of education to take away a place where young people go to participate in sports and a place where young people learn the value of leadership, character, and school culture. Newtown High School is an entry point for students from all around the world. These students are entitled to use their own field. If a new Pre-K is built, we will lose our tennis courts, handball courts, part of our track field and possibly the field house. Our field is currently utilized by the PSAL for various events, Newtown students would no longer be able to participate in such events, because losing a part of our field would result in losing some of our teams and facilities. Once these facilities and teams are lost, they will not be replaced, thereby denying all future generations usage of their very own field. Please sign our petition and help us in tell the Department of Education that Newtown High School needs its field for current students and future generations.
Posted by Queens Crapper at 7:25 AM

Great, this was the Newtown Village cemetery. Ask our boro historian about that.

Pre K Translation = Baby sitting service for illegal immigrant offspring.
Has anybody seen what these illegal immigrant mothers feed them in McDonalds or the checkout counters of Walmart ? Millions of 5'2 180pound preteens and the mayors response to this morbid obesity and imminent health disaster is start taking away running tracks ?

Sure why not with the area getting more housing and more people we need more Pre-K (daycare) so these children can learn calculus and get jobs in the countries big new STEM programs that companies are developing in NYC. anyway who needs sports when Pre-K is more important.

"...this was the Newtown Village cemetery..."

Yup. From about 1650 to about 1820 this was the Old Newtown Village Cemetery. In the early 1800's other cemeteries opened and this burial place fell out of favor with most Newtown residents. Several years later it became a resting place for the indigent.
In late mid to late 1800's it again fell out of use and became a farmers field. In later years those who could afford it exhumed their descendants and many were re-buried in Mount Olivet and local church cemeteries.
In the 1930's the remaining grave markers were taken down and laid flat and covered with dirt to make way for a playground.

Yes, Pre-K is much more important. These youngsters can then be indoctrinated into a system that teaches they do not have to work, that society owes them everything, that those who work hard to succeed are evil, that all non-citizens deserve the vote, that socialism is a cure to all the ills of society and capitalism needs to be destroyed at all costs.

This is what a one party City and City Council deem necessary.

learn calculus and get jobs ?
Most will grow up never speaking English, joining gangs and be on welfare for life. What happening in the home country's will repeat itself here in 20 years. The government loves them because they breed like rabbits and stay dependent and obedient to the progressive Democrat government that feeds and takes care of them.
This is the same shit the Kennedy's did with immigration in 1965 and civil rights all over again only worse because they are flooding in not only un-checked but one in 10 are dangerous criminals who don't consider rape, theft and violent acts allowed back back home crimes. A good 2 in 10 believe the USA was stolen from Mexico so anything for the taking is game.

You son of a bitch, you left the bodies and you only moved the headstones! ....

What'll they do with the dug up bones?
"Poltergeist" for the Pre-K's.

"left the bodies and you only moved the headstones"
Yeah anything to completely erase the America, its heritage, culture and people we knew and replace it with a society of mud like 1/2 of Europe.
Take a stroll through London or Stockholm these days you'd think your in downtown Beirut. Islamic's spitting at women in skirts, all these people with bark features look at you with looks to kill if your white.
Dam to hell this Mayor, President and local politicians keen on this agenda to completely dismantle and destroy America. To add no way to pay for all these illegal immigrants without stealing and re-distributing wealth via taxes, Obamacare and whatever these progressive bastards can think of.
This new 4% Medical device federal tax on things like tires, new cars, fishing poles, coal, plastic laundry baskets unbelievable.

Build a mall there while you fools are at it.
Or a hotel for the 300K muslims that are coming soon.

Yea, remember talking to our previous borough historian Mr Headstone Cogan about the Burroughs Family Cemetery in Elmhurst - off Alsteine and Corona. Big double yard next to a house.

As it stood in the way of development he refused to get involved. So much for the self styled defender of cemeteries.

It disappeared about 5 years ago under development.

So Mr Headstone has now been replaced by Mr. Blockhead. Go ask him about his reaction to disturbing several hundred graves.

It will be undoubtedly shameful indeed. We deserve better.

I have a bit more on the history of Newtown High School Athletic Field on my blog and in my book. Take a look.

As far as I know, the cemetery used to be at the playground across 92nd Street from the field. The field lies on the buried stream bed of Horse Brook.

The horsebrook ran south of the athletic field as per the 1924 aerial view on nyc.gov/citymap

The field was refurbished less than 5 years ago. Very short-sighted planning.

I used that field back when I attended Newtown H.S. and it should not be torn down. lots people rely on that field for exercise, recreational purposes. They should help maintain it with tax dollars from Queens Center Mall.

Aren't there baseball fields in Central Park to build pre-k schools on? And why not since the city is going to build a stable which REAL animal rights activists are protesting that they will be cruel to the horses. Or will the yuppie bankers and hipster techies and advertisers and marketers bitch because they can't play softball or quidditch.