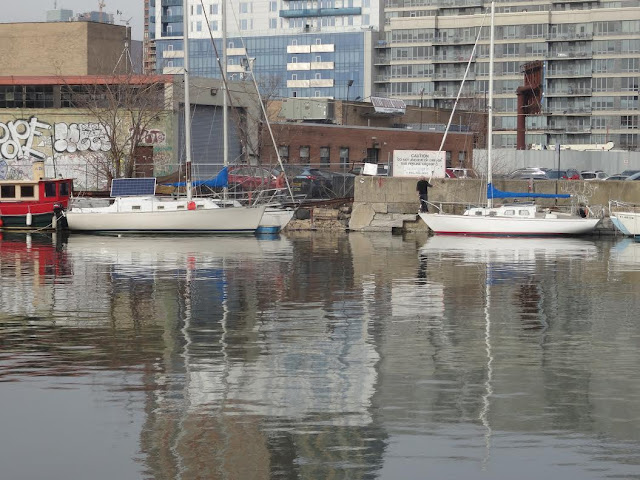 Today I decided to savor some sunshine and take a walk. I felt enjoying my community's "public"/"park" spaces was in order, so I headed over to the Manhattan Avenue Kayak Launch. The attached photos, which I knew you would find interesting given recent events, were taken at 1:17 pm. Although they pretty much speak for themselves, I will elaborate a bit. The bearded fellow (to the right) was engaged in a conversation with the fellow in the orange shirt (to the left). About what is anyone's idea. At one point there was a fellow to the left of the orange shirted fellow. He appeared to be taking photos of the bearded guy and the orange shirted guy talking. He could have been taking photos of the bulkhead (Queens side, obviously) of the former bridge which once spanned from Manhattan Avenue to Long Island City. Or both. Too difficult to tell.

Your comrade on other side of the creek, 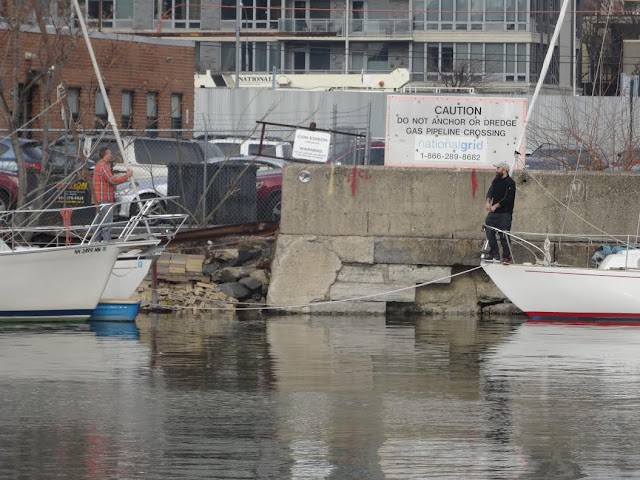 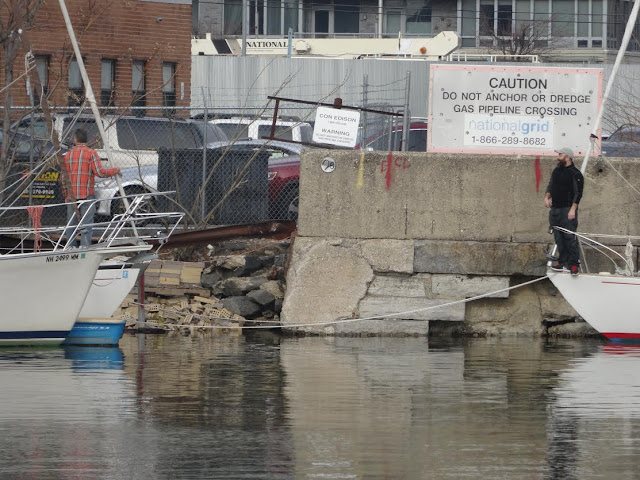 Parking one's boat on a Superfund site as well as on top of a gas line - not too bright. 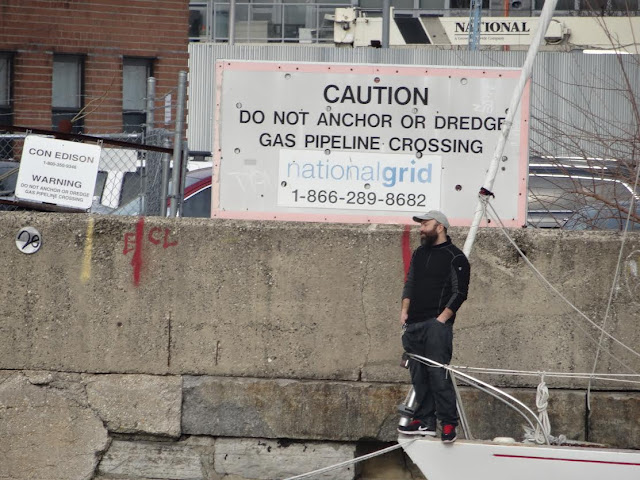 They appear to be moored (attached to the shore) not anchored (which is a device that goes into the water). Mooring isn't an issue. Anchoring is, as an anchor grabs hold of the bottom, and when you pull it up, rips what it is attached to, hence you don't anchor by pipelines/electric lines, but mooring isn't an issue

when you going back to Hartford?

Fucking Generation Gentrification hipshits. These people think they are exempt from the laws and immune of the elements. I don't have a degree in sociology or pyschology, but these types have a delusional haughty sense of invincibility. That loon who swam in the sludge there seems to have encourage these squatting entitled dumb asses. I bet these dicks are probably hosts renting these on Airbnb.

I am wondering what would happen if homeless people encamped by there.

I am also wondering why our former local news media has not done reports about the crumbling bulkheads. Well, until the next hurricane comes and pushes all that shitty water near the affordable luxury apartments a few blocks from there.

With the influx of all these fucktards, this city is turning into some village in a twilight zone episode.

The hat. The beard. The sneakers. The plaid shirt.

You may want to explain 'recent events' - part of the bulkhead wall collapsed because of the boats illegally anchored there. Some of these boats are listed on AirBNB.

The entire south end of vernon blvd is collapsing into the creek while there are still cars, RVs (more AirBNBs) parked on it.

Crappy you should go take a look sometime.

"They aren't anchored, they're moored!"

Hello, as explained - part of the bulkhead wall collapsed because of the boats illegally anchored there.

So it's not only the hipsters who don't read.

Boats aren't supposed to be moored there either, so yes, mooring is an issue. Find a marina. I wonder what they do with their effluent.

And this has been going on for a long time with no one doing anything about it.

Remind me why these two are 'hipsters' and not a pair of idiots on the company boat? What hipster would have their boat (?) in NY in the winter?

Just a pair of a-holes.

they aren't hipsters, they are hipshits(TM JQ LLC), Maybe it's time to take that target demo label away from them and give them a proper name to go with their frivolus spending and imbecilic habits and vices. When I think, well used to think of hipsters I think of the beat poets and seminal jazz musicians of the 50's and early 60's.

If the city had done it's job and sent a few NYPD patrol boats there to kick them out and send some DEP officials to do a proper evaluation of the conditions of the bulkheads, maybe they wouldn't have crumbled, but what do I know, I'm just a layman taxpaying citizen.

And who runs that luxury apartment building or owns the property on it that is really close to the superfund site? You would think as a precaution they would have canvassed the area before they built it. Damn it I forgot again, they don't give a shit about infrastructure in addition to schools and emergency services when it comes to overvalued property and reckless consumerism

Since when can hipsters afford a boat?

That is if they aren't just the minimum wage hired help to run the boat.

I think it's worth noting that another area overlooked and neglected for years has fell into disrepair in the presence of a National Grid installation. The other being the recent collapse of major intersection in Rockaway Beach a few weeks ago.

How do these assholes heat these crappy shells or do they just live like animals ?
I also see no pump-outs ports(meaning these cheap old boats have a no septic tanks. if so isn't flushing raw sewage the into the creek illegal discharge under new regulations. (You must dump at least 3 miles out)
Somebody with power must be covering for them.
BTW: Factory's and a music studio (Roxie) along that creek all had scores of workers and musicians who died of the same type brain cancer. Lemmy an old Roxie client and personal friend I knew for years included !

Those boats have been there for years. If they want to die of cancer and breath carcinogens, more power to them!
As for the power - did you notice the solar panel?

Hong Kong boat people hipsters...LOL!
But weren't they pushing this area to be the Venice of Queens?

Article also mentions there is access door to subway tunnel there too. Great now we can draw a map for terrorists to get in tunnel