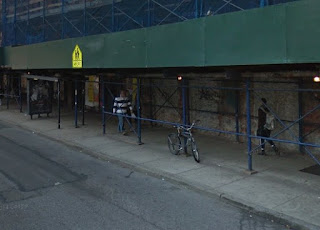 Across the city, sidewalk sheds and scaffolding spread like kudzu. They devour precious sidewalk space, cut off sunlight, create safety hazards and hurt businesses. There are now nearly 9,000 sheds entombing city streets, according to the Department of Buildings, up from about 3,500 in 2003. That's 190 miles worth of sheds, or 1 million linear feet—equal to the distance between Gansevoort Street in the West Village and the hamlet of Gansevoort in upstate Saratoga County.

The unprecedented demand is driven in part by the new wave of construction fueled by the city's robust economy. But there's another, more important reason: Thirty-six years ago, the city passed a law requiring regular inspections of older buildings to ensure concrete and bricks don't fall on pedestrians. And since then, the City Council has strengthened the law while adding new ones, giving rise to an industry that generates $1 billion a year—$200 million of that is for the street-level sheds, and the rest pays for the scaffolding and the workers who repair the façades.

Sheds themselves can be safety hazards. Last year, Mayor Bill de Blasio described sheds as "great for criminals as a place to hide" and "great for folks who want to throw their trash on top." On Jan. 8, his administration announced a "shed safety sweep" in which inspectors will examine sheds to ensure they're well-lit and code-compliant. In 2007, a New York police officer chasing a suspect slammed into a poorly lit shed at the corner of Riverside Drive and West 109th Street, and was injured. "I never saw the pole ... the light was--it was black, dark," the officer later testified. Small-business owners complain that sheds obscure signs and shop windows and drive potential clients across the street. Last month, the Upper West Side's Ocean Grill shut down after a shed and construction noise drove away customers, according to a lawsuit the owners filed against their landlord. BLT Fish in the Flatiron district called a shed outside its restaurant a "kiss of death" in a 2013 lawsuit against its landlord that was settled a few months ago.

Residents loathe sheds because some never go away.
Posted by Queens Crapper at 6:40 AM

And they mutilate and kill sidewalk trees.

Come on, we all know this is the answer to the homeless crisis.

"Shelters on every corner" said Mayor deBlasio. Who says I cannot handle a crisis.


What is the alternative?

This is a great way to help the FEW companies that rent these sheds.

I wonder how much, and to who they contribute/contributed...

If those sheds were not there, you would have pieces of building materials falling down and crushing your skulls.
If safety and ugly must go hand in hand, then my vote is keep those ugly sheds in place to protect us.

In Flushing on the northeast corner of 3nd Avenue and Linden Place there is a construction site that is surrounded by a shed for about three years and it appears that construction has ceased. The signs on the outside of the site say the building should have been completed somewhere in 2014.

Also, on the southeast corner of 35th Avenue and Leavitt street there is another construction site that has had a shed for about three years and construction there appears to have ceased.

Have these properties been foreclosed or have the builders lost financing or are they on hold due to DOB violations?

Let's quickly review why they are there, shall we? Back in the late 70s a chunk of a building up near Barnard College fell and killed a student. The law was put in place requiring owners to inspect and repair their facades-- every 7 years? 10 years?, necessitating the scaffolds. Would suck to get a piece of concrete smashing through your skull and brain. I vote yes. Next non-problem?

"What is the alternative?"

Not leave them up for years and years? Get the work done and take them down?

Another reason is in many cases its cheaper to keep the shed than risk a lawsuit from something or someone falling off the building (nice old classic stonework) or something flying out the window ( water balloon, air conditioner, TV, garbage or person) and hitting someone on
the street.
Thank You 1-800 Lawyer.

"New York is insatiable right now when it comes to sheds," said George Mihalko, a shed-equipment supplier who said his biggest challenge is finding inventory to fill the five 25-foot-long truckfuls of steel pipes and beams that he sends out daily from his North Bergen, N.J., warehouse. "I've never seen anything like it in 30 years."The unprecedented demand is driven in part by the new wave of construction fueled by the city's robust economy. But there's another, more important reason: Thirty-six years ago, the city passed a law requiring regular inspections of older buildings to ensure concrete and bricks don't fall on pedestrians. And since then, the City Council has strengthened the law while adding new ones, giving rise to an industry that generates $1 billion a year—$200 million of that is for the street-level sheds, and the rest pays for the scaffolding and the workers who repair the façades.One of the shed boom's biggest winners is William Laffey, a 36-year-old native of Bellerose, Queens, who, after graduating from Albany's Siena College in 2001, started out managing the tool inventory at a Home Depot. He is now president of Spring Scaffolding, a Long Island City-based firm that builds more sheds than anyone else, with 583 standing around the city, according to Buildings Department records. "I wouldn't say this is recession-proof, but someone always needs scaffolding," Laffey said.Of course, what some might call boom times for sheds would be described by others as an epidemic. "Sheds are awful and everywhere,"
http://myinforms.com/en-us/a/22491685-the-law-that-created-the-billion-dolllar-scaffold-industry-has-turned-city-sidewalks-into-an-obstacle-course/

That was 32nd Avenue and Linden Place.

RKO Keith's Flooshing , has had any number of sheds in place going way back to 1986.
Now, owner #4 is claiming to build there. Yeah, right. After big BS CB7 presentation....nada!

Maybe we can get a Robert Moses Jr to revolutionize our primitive sidewalk network.

Wait that whole area will be destroyed. The developers are working on it!

They are safer than a lot of new construction....and give street bums shelter from the rain.