Israel will not run for re-election 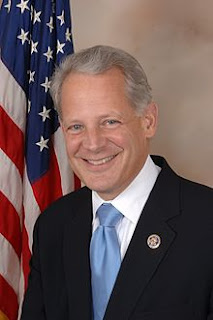 Long Island Democrat Steve Israel announced that he will not run for reelection this year, bringing his 15 years in Congress to an end. He said in a statement that he was excited to pursue "new passions and develop new interests, mainly spend more time writing my second novel" and about "spending more time home and frequenting my beloved New York diners." He chaired the Democratic Congressional Campaign Committee during the last two election cycles, which means he is well acquainted with the factors that make a seat hard to win. His district is currently rated a toss-up.
Posted by Queens Crapper at 12:04 AM

Somebody sees the writing on the wall.

Some sheeple are waking up...

Did Preet Bhahara "Influence" his decision?

Say goodbye to another free spender of other people's money.

To be replaced by the same.

Here's to the new Boss. Same as the old Boss.

Attention: Steve Israel and All Politicians (Not Public Servants):

The grinding, government 'cradle-to-grave' buffet is now closed. Kindly continue to feed off the misery of any and all other vulnerable sources of your choosing---or, abstain altogether by finally connecting to a dignified and honest way to make a living, and preferably one that is in sync with the rest of the world.

But, it's a lot easier than you think, Steve, when pay is actually earned and deserved! (Emergency grief counselling services available for all former, politically failed hacks who've never earned a private industry paycheck before!)

Welcome to the 'other side' of what you and your henchmen created, Mr. Israel---where help is an illusion, and trust is for suckers!

He has been rated as one of the least effective members of Congress, with effectiveness rating of 1%. See link:
http://members-of-congress.insidegov.com/stories/5278/least-effective-members-congress

At least he proved that he is a PATRIOT by voting for HR4038 "SAFE ACT".It enables the FBI/H.Security to absolutely vet all IRAQ/SYRIAN REFUGEES after the State Dept/Refugee RELIEF GRPS.relesse them for the U.S.system. even though DIR.COMEY states that their is NO ABSOLUTE method of vetting those who have no nations data bank available.

Al Centola should run. He is in the district.

And, with a second book deal in the works, it's not hard to see why he's been rated least effective in Congress, in which that alone is hard enough to accurately gauge in the first place---given that every one else's ratings in the cradle-to-grave, Federal clubhouse are likewise hovering over single digit fail!

But, after 15 grueling years of lunch and a manicure, it's finally Miller Time! Oh, happy day!

Still haven't found an identity yet, huh Anonymous (just like all cowardly, trash talking losers who attack and hide)?

If you want to pick a fight with someone online, and hold this thread hostage by using it to personally attack me (which is not the topic here), then don't be a coward, Anonymous, and level the playing field by revealing who you really are, before talking your customary trash and mouthing off! Settle your score like a man, then, instead of hiding in obscurity.

Otherwise, you depict yourself to look like yet another imperious, self-absorbed, brainless coward, while you 'Attack And Retreat' (while hiding under the cover of anonymity), and 'Accuse And Evade'---the true mark of cowardice, which you now completely personify.

And, it's becoming continually obvious (like on many other threads upon which you left your cowardly trademark), that you didn't attack anyone else here, because they too are 'Anonymous,' leaving me to believe that your grudge is personal, since you have the advantage of knowing my REAL identity (while still acting like an entitled cyber bully), and I don't know yours---not a dignified way to live, much less begin a new year with more of the same cowardice.

No one is interested in your personal, unjustified attacks against me, or anyone else. So, control your urges and impulses to stop, then, and perhaps your reputation as an online nuisance, cyber bully and public fool just might not continue to define you as such, in a new year, no less, where there is still time for you to redeem yourself!

Iritano, we're all over the place.

One who knows all said...

No one is interested in your personal, unjustified attacks against me, or anyone else.

Oh yes we are because you have shown yourself by your verbosity to be an extremely annoying individual. And this needless annoying verbosity of yours is probably why you are not taken seriously at Borough Hall, by the politicians, and elsewhere.

I am having a Steve Israel goodbye party. Bring your own booze & bitches !!

Legion and One Who Knows All---reinforcing extreme cowardice and arrogance, as only all arrogant cowards can deliver---anonymously, of course---the preferred playing field of all powerless Eunuchs like yourselves!

But, there is nothing more annoying (or passive aggressive), than not being able to read who's behind the legion cover (read, cowardly scourges), who choose to hide behind the wizard's curtain, as they talk endless trash and ridicule without consequence, just like all tough talking bullies with a Napoleon complex (and other obvious, anatomical shortfalls)!

So, until I know whose behind the minority of extreme cowardice guys, zip up your flies---there's nothing there that anyone wants to see---even if they could!

I used to think that there could be nothing more devaluing to society than all politically failed leadership on the take---that is, until 'Legion' and his 'Legionnaires Disease' minority following came along to hijack this post, with a cowardly 'Attack And Retreat, Accuse And Evade' assault that is personal in nature, without regard for the record of fact.

But, you've all proven to be far more lethal than any political fail, as you show us all what toxic, fungus looks like beneath their heels, often below gutter level.

It may be a new year, Legion, and One Who Knows Nothing (and proves it!)---but, the ugly, anonymous slime that you represent, only continues to reinforce your epic fail at purportedly human life, that you so completely invite.

Until you stop hiding behind the curtain, your words are as worthless as the brainless cowards who write them!

Id like to see his net worth when he was first elected,how much his salary was for the past 15 years,and what he is worth in 2016.
Also what his pension will be.....

Thank you, Anonymous. Your kind words are a testament to what truth, accountability and human decency represent.

Now, please pass the 'Kool-Aid' around to all those who betray all pretense of public trust and integrity---right now, they're dying of thirst!

So, I guess no one wants to go to the party:(