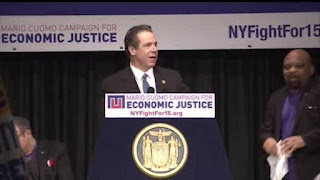 Without mentioning Bill de Blasio by name, Gov. Andrew Cuomo said Monday that raising wages for city workers is part of his "two-pronged strategy" to get to a $15 hourly minimum statewide—and called on the other two citywide elected officials to push the city to lift its own wage floor.

"Reaching out to other businesses, reaching out to other government officials, asking them to come on board, asking Comptroller Scott Stringer and Public Advocate Letitia James, bring the city of New York with us," Cuomo boomed at a rally in midtown. "Join this crusade."

The other part of the governor's approach is to persuade the state legislature to raise the statewide minimum to $15 over the next few years, he said as he announced that State University of New York workers will be the newest members of his $15 hourly minimum-wage club.

The governor has already raised wages for fast-food workers and state employees. The more than 28,000 SUNY workers affected across the state ramp up to the $15 minimum by 2021, or 2018 for those in the city.

De Blasio supports the push for a statewide $15 minimum wage, and in fact was an enthusiastic proponent of an increase before Cuomo was. But the governor has stolen the mayor's thunder, and by apparently calling for city workers to make $15 per hour has turned the tables on de Blasio, who previously established an $11.50-an-hour minimum for city workers. Any mayoral pledge to raise city workers' pay would now look like a response to the governor's call.
Posted by Queens Crapper at 9:17 AM

Nice to see these 2 clowns fighting over who will be the first to raise gov't workers wages to the level of the illegal day laborers.

i see nothing resembling a free market, free country or free people.

what a joke this country has become.

$15 sounds good, but now companies will look into automation, robotics, AI to replace humans. So how will this minimum wage thingy work out for the displaced workers comrade Cuomo?

Dear Andrew,I know some criminal lawyers who are worth about 15 dollars an hour willing to defend you when Shelly sings,think of the savings,
15 dollars an hour to keep you out of jail
Governor Cuomo,Preet Bahara is hear to see you and he has a dozen US Marshals with him,should I tell him your not in?

about those "AI to replace humans". A lot of the McDonald locations in Manhattan are starting to replace humans with computers. They aren't AI"s, but still smarter then what they currently have.

He's lifted a lot of things, it's in his tradition

I think the City Council, the State Assembly and Senators should get $15 an hour. It's more than they are worth but everybody has to eat.

about those "AI to replace humans"

That's right! I see them first hand and the new technology waiting to be unveiled will seal the deal that's for sure.

There is a plan.

As the cost of labor increases, businesses will increase automation and technology.

This will cause more uneducated and unskilled workers to be unemployed.

These are the people that will vote for those that provide FREE benefits...


“The problem with socialism is that you eventually run out of other people's money.” ― Margaret Thatcher

whats the point of being in business for yourself if the gov't is constantly telling you how to run it? This guy thinks hes going to be running for president soon... The business of America is business!

Yeah right.
This will only send the small legal operating business owner's into exclusively hiring illegals off the books or face bankruptcy.
Cuomo II is a total moron or in co-hoots with the mayor, somehow. Why so much hostility toward the small family passed down business owner in this city ?

AMEN RIGHT ON ! It currently costs the city over 6 men on salary to change a streetlight bulb @ $2800 !! If these city union employees "dropping orange cones" & wiring LED fixtures cant live on over $240,000 + benefits and golden pension plans F em !!

The comments about $15 being too much are really disgusting. You all do know how much rent is in NYC right? You do realize minimum wage has not kept up with inflation and that like it or not, the people who flip your burgers, man the restaurants, clean your laundry and clean up your filth need to live somewhere right?

There's no more ghettos for these people to live in.

Minimum wage in NYC should be 25. 15 is literally nothing after rent anywhere in NYC.

Check it out! A burger making robot, their days are numbered

this government price manipulation just causes inflation and will backfire
look at Venezuela, you wait on line for food and toilet paper and get nuthin'
Venezuela

the gov't has decimated the good paying jobs with their so called "laws" that were meant to "help" and "lift" everyone "up". Politicians think they know best but the economics of the situation will play themselves out. Outsourcing manufacturing and in sourcing tech labor, now it will lead to more automation and cost-push inflation. The rent you are talking about? its going to just get higher and higher. Cuomo can spread false rumors about how we are all subsidizing the poor but he doesnt even mention that it is a drop in the bucket compared to all the tax subsidies he is giving billion dollar condo developers. Isnt that what Sheldon Silver was found guilty of? giving massive tax breaks to billionaires on their billion dollar real estate portfolios, while the rest of us continually pay higher property taxes on our homes!!!? Also he is giving some the mayor of buffalo a billion dollars of funny money to "stimulate" that economy. I guess that is why byron brown (mayor of buffalo) signed off on the governors 15 dollar wage mandate. it seems everything is being done by mandate these days, why are we even paying or electing senators and assemblymen in NYS.

The minimum wage and unions built America's middle class. The decline of both are contributing factors to the growing income gap.

$15 -an-hour a problem? Really? Anyone worried about this needs to cook at home or mow their own lawn and it won't be a problem.

Comparing the US to Venezuela is moronic. And anyone thinking that robot serving burgers will replace the minimum wage workers before 2030 is also a moron.

This debate over a $15 living wage is a red herring to distract you all from the execs whose companies are losing millions, yet are paid enough to own several homes and drive a Porsche.

Comparing the US to Venezuela is moronic. And anyone thinking that robot serving burgers will replace the minimum wage workers before 2030 is also a moron.

And why is that? Care to explain?

The car that you are driving today was built by robots.
The warehouses that handle your merchandise employ robots.
Driverless cars are next. Planes, trains - we already have them.
You think all the big business leaders are morons?
Wake up! AI, robots, automation need no benefits, no unions, nothing.
Initial investment with guaranteed return on the long run.
So you better wake up and face reality.

What is upsetting about the $15/hour promise is that grandstanding leftist, socialist politicians hail this as a great achievement.
But, wait a minute. Are they morons or stupid?
Far from it. Now they know they can promise $15/hour without any problems, because they know what is coming down the pike from various technologies in the very near future.
So they get the masses worked up with great speeches, promises, but real life will be different.
Don't fall for it folks and argue about pros or cons of the wage increase.

Democrats hate freedom and America. But yo keep voting for them. F off and die, New Yorkers.

Now he thinks he's a CEO. Jerk! Remember what he did at HUD.

Pandering Cuomo is at it again.

For those who came in late: Extra, Extra. Read all about it! A classic in investigative journalism by the Village Voice's Wayne Barrett. Andrew Cuomo caused the economic debacle of 2008 when he was Clinton's Secretary of Housing and Urban Development. No two ways about it:

HIS OWN BROTHER CAN'T STAND HIM. HE'S A MORON PLAIN AND SIMPLE!! HE RAN ON HIS FATHERS LEGACY AND HASN'T LIVED UP TO IT...

It's a no brainier - the only winner here is city government.

My business as well as others will just pass the wage increase to you consumers who fought for a higher minimum wage.

payroll taxes, worker comp etc. Legitimate franchise businesses which collect every cent of sales tax and pay every cent of corp tax and the business owners themselves who are taxes at regular income tax rates (not wall street 15% nonsense) are being penalized even more with a completely unilateral mandate by king cuomo. He was promoting all those "tax free zones" upstate to setup manufacturing businesses, none came. NY regulation alone is reason enough not to start a business. Why even think of starting a new business in NY if everything is run by decree.

Mayor DiBlasio announced a similar initiative for city workers. Who is copying who?

Communism is death by murder.

Socialism is death by suicide.

The minimum wage and unions built America's middle class. The decline of both are contributing factors to the growing income gap.
-------------

The minimum wage did no such thing. MW was for high-school kids doing summer jobs. the work that comes with MW jobs isn't something that should be use to support a person for decades and raise a family on. If you are 40 and can't do better than Fry Cook, thats on you, don't look to the government to help you in your failed life.

As for the Unions and Middle Class, The days of high-earning manufacturing and service jobs is gone, as it should be. In Economic terms, those days were an artificial bump in the wage chart, thanks mostly to the US emerging front he Second World War as one of the few western nations to come out with its infrastructure intact. We were able to produce and export to rebuilding nations, and we were able to name our price, and we were able to pass on that bonus to the workers. However, once the rest of the world caught back up, sometime in the late 70s, early 80s, those days were numbered.

In terms of Historic Economic indicators, Union work, also considered "blue collar", is work that is *below* the threshold for what is considered Middle Class. Historically, the middle class was composed of middle management and supervisors(post industrial revolution), and traders/bankers/merchants. The type of work produced by the Middle Class is clearly not the type that would be associated with Blue/Union/Working class jobs.

Of course, your shop steward will tell you otherwise.

This moron has no serious agenda. All he wants is to bring down DiBlasio. The end result is double harm to city & state residents because nothing is being done about the other real issues affecting the state. You were voted in to govern an entire state not a zip code (212)...