Queens subways will be getting shown some love 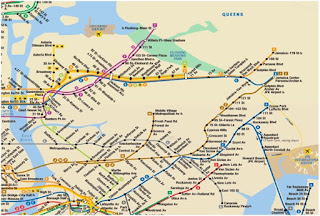 Subway riders in Western Queens would be among the biggest beneficiaries under a new capital improvement plan being put forth by Gov. Cuomo and the Metropolitan Transportation Authority.

They are asking that seven stations in Queens be completely renovated and modernized by the end of 2020, including four on the N-Q line in Astoria and Long Island City, as well as the M-R station at Northern Boulevard in Woodside.

The targeted N-Q stations are at 30th Avenue, Broadway, 36th and 39th avenues.

The plan also calls for refurbishments at F line station at Parsons Boulevard in Jamaica.

Yet the L line is likely to be closed down for years...
Posted by Queens Crapper at 12:18 AM

Installing wifi in the subway is a very bad idea considering that I.E.D.'s can be triggered by cellphones. But the MTA's concern for people updating their facebook page, sending texts, and interactive gaming and gambling is more important than anyone's safety.

As for the L Train, take that hipsters and yuppie scum in the north and Manhattan, have fun taking the bus and getting ripped off by uber and lyft! Sorry for those south of the line though. Courtesy of the worst fucking transit system in the universe.

I think the a train needs fixing. Something has to be done about that train....it is the worst!!

There goes the East NY revitalization that de Blasio was planning. With even less transit options in the area, the neighborhood will not change.

How about expanding the subway system so it goes throughout queens instead of only 2/3 of the way in. Queens goes all the way out to 245th Street on Hillside. There are 66 blocks on underserved NYC residents. and that's just the F line. All Queens train lines need to be extended.

I'LL BELIEVE IT WHEN I SEE IT OR EXPERIENCE IT FOR THE FIRST TIME!!

IF THE 7 LINE IS EXPANDED BEYOND FLUSHING IT WILL HAVE A POSITIVE EFFECT ON PROPERTY PRICES BUT YOU WILL ALSO GET A HIGHER NUMBER OF 'TRANSIENTS' AND PERHAPS HOMELESS WALKING AROUND. I DON'T THINK ANYONE WANTS THEIR PERSONAL SAFETY COMPROMISED IN ANY WAY, ESPECIALLY GIVEN THE HIGH RENTS AND QUALITY OF LIFE THAT YOU GET FROM LIVING IN NORTHERN FLUSHING.

"All Queens train lines need to be extended"

They will extend all queens lines. they'll be extended further into Manhattan and service will become even worse than it already is.

Look at the 7 train. while it was'nt the most glorious train ride, after extending it to Hudson Yards that train has delays and breakdowns EVERYDAY

>How about expanding the subway system so it goes throughout queens instead of only 2/3 of the way in.

Or, how about north/south ?

The best way from one part of Queens to the other shouldn't be by going through Manhattan.

Its pretty crazy that if you want to get from Ridgewood or Middle Village and you want to get to Astoria, you have to pass through both Brooklyn and Manhattan to get there by train in a reasonable amount of time.

Love?
How about a good cleaning and enforcing laws which forbid eating your lunch or breakfast on a train.
The rats get the spilled leftovers. Yummy! They can have some of the slops that people drip onto the platforms too.