Eagles have landed at FMCP 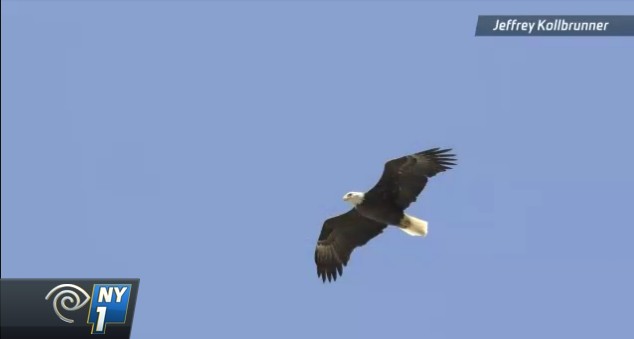 If you take a walk through Flushing Meadows-Corona Park, you can find a variety of species. But a pair of bald eagles are definitely getting a lot of attention.

"This year, we finally confirmed that we have two adults again," said Jeffrey Kollbrunner, a local wildlife and nature photographer. "It looks like they are a pair or trying to become a pair, which is exciting for our area."

Kollbrunner has two decades of experience documenting birds in Queens. He has spotted immature bald eagles in the area over the past seven years but says the mature eagles have been sighted more recently, in the past two years.

"Having these birds of prey are phenomenal for the region, and you know, people can enjoy them from a distance," Kollbrunner said.

That's exactly what we did. We spotted one of the eagles sitting on ice in the lake. Twenty minutes later, he had company.

Kollbrunner says the state's conservancy efforts have proven successful.
Posted by Queens Crapper at 12:51 AM

We have had plenty of birds of prey in lowly Queens.
They are called politicians. They swoop down on us taxpayers and snatch our dollars.
Tell me that Paul Vallone is not a bald eagle!

Are the Democrats or Republicans?
Can they vote? Being iconic American birds, they must be citizens.

A lot of falcons have been flying around too, but this is way cooler.

It should bring down the rodent and raccoon population.

Those politicians aren't eagles or falcons. They are vultures.

Forget birds of prey, what we have in elected office are tapeworms.

I can't believe this was written by Stossell. This must be the apocalypse.

The other day I saw a Red Tail hawk at Queens Blvd. and the LIE checking out the pigeons from the top of a streetlight. Lots of pigeons stay under the LIE so it's good pickings.

"For my own part I wish the Bald Eagle had not been chosen the Representative of our Country. He is a Bird of bad moral Character. He does not get his Living honestly. You may have seen him perched on some dead Tree near the River, where, too lazy to fish for himself, he watches the Labour of the Fishing Hawk; and when that diligent Bird has at length taken a Fish, and is bearing it to his Nest for the Support of his Mate and young Ones, the Bald Eagle pursues him and takes it from him.

"With all this Injustice, he is never in good Case but like those among Men who live by Sharping & Robbing he is generally poor and often very lousy. Besides he is a rank Coward: The little King Bird not bigger than a Sparrow attacks him boldly and drives him out of the District. He is therefore by no means a proper Emblem for the brave and honest Cincinnati of America who have driven all the King birds from our Country...

"I am on this account not displeased that the Figure is not known as a Bald Eagle, but looks more like a Turkey. For the Truth the Turkey is in Comparison a much more respectable Bird, and withal a true original Native of America... He is besides, though a little vain & silly, a Bird of Courage, and would not hesitate to attack a Grenadier of the British Guards who should presume to invade his Farm Yard with a red Coat on."

You guys are right, politicians and Bald Eagles do have a lot in common.

Where is that quote from last anon?

Ben Franklin was quite the raconteur. The original hipster.

Call me when the money has landed to fix this park...