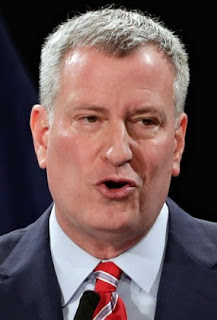 Mayor de Blasio said a property tax cap for New York City is a "non-starter" and state lawmakers' focus on it took away from pressing budget issues.

"Honestly, it's a non-starter," de Blasio said of imposing the 2% cap on tax levies, which other municipalities in the state are forced to abide by, on the city. "That cap would be very dangerous for New York City."

When de Blasio traveled to Albany this week to testify about the state budget, legislator after legislator pressed him about property taxes. De Blasio had hoped to push back against possible cuts to Medicaid and CUNY funding, in addition to talking about mayoral control of education and affordable housing.

"There were issues that probably didn't get the time they deserved," he said Thursday.

A measure to force the city to adopt the cap has passed the state Senate, but has virtually no chance in the Democrat-dominated Assembly.
Posted by Queens Crapper at 6:56 AM

" ... but has virtually no chance in the Democrat-dominated Assembly."

Do I have to say anything more???

What's the "danger" Mayor Idiot? You and your worthless politician cronies won't get your pay raise?

Dontcha love these pols?
Bloomberg let developers build thousands of new condos, coops and apartments and gave the builders/buyers tax abatements and breaks while the owners of one and two family homes in the boroughs get his with the increased full tax load.

We are the ones subsidizing the millionaires and the one percenters.
Their property worth increases beyond comprehension while they pay zip in taxes.

We in the boroughs NEED the 2% cap.

If not we will see our taxes increase beyond the ability to pay and the Manhattan millionaires go Scott free.

At least The mayor is honast,what ever it takes,He will take every penny he can SQUEEZE out of you,now that's a true socialist
Sanders & DiBlasio 2016

Big blond superman!
Give him a swastka pattern tie and Der Wilhelm looks, in this photo, like he could be one of Hitler's boys.
Being a REBNY party stooge is almost as bad. Sieg heil!

good, bad or indifferent
2% per year would only double the taxes in 35 years
it should be correct, the nuns taught me math
you know what that means?
quadruple the water bill each year along with all the other taxes

DeBlasio is horrendous. He bends over backwards for blacks and other minorities, taking more and more money from hard-working white people and giving it to idle leeches. White people can't even get jobs. Walk into any government office and you will find that most of the jobs are filled by minorities. If there is competition for a job between a minority and a white person, the minority will win, because everyone is afraid of being accused of being a racist. Around 90% of the criminals paraded into court are minorities. They complain that they are in trouble with the law because of racism. Maybe it's because they commit 90% of the crimes. Pretty soon, all whites will abandon the city, because they will not be able to afford to live here. What good is trying to do right and work hard, if the fruits of your labor are taken, and you are treated like a second class citizen. Everyone should be treated fairly. We even have to worry that not enough blacks were nominated for Oscars this year. Maybe they were just not good enough this year. Minorities complain about not being treated fairly. How do you explain the ridiculous money raked in by minority entertainers and sports figures? If you listen to them talk, most of them are ignoramuses. Good people don't even have a say anymore. Thank you Mayor DeBlasio, Governor Cuomo, and President Obama. What a catastrophe!

WTF does the commander in chief got to do with De Blasio's ties to REBNY?
So here we go again...it's all Obama's fault.
Everything is Obama's fault when we cannot bare to blame our own inadequacies.
The "dog ate my homework" has now been replaced by "Obama ate my homework".
C'mon...get a brain. Get a life!

Yep...Der Blasio would look the perfect wunderkind with a pair of Waffen SS collar tabs.

If you really hate Obama's America so much, why don't you emmigrate?
Groan...another armchair malcontent....or the same one , who's been tearing up the web lines with repetitive posts.
Johnny one note strikes again.

If you really hate Obama's America so much, why don't you emmigrate?

If stupidity would hurt you'd be screaming just about now.

Really?
I was an honor student as early as high school....dean's list in college, etc.
and have an IQ of approximately 140.

Normally I don't brag. Only when a doofus challenges my intelligence I feel obligated to come to my own defense in a language format
that even a real dork can understand.
Emmigrate! It won't be a loss to America!