What's going on at the LaGuardia Airport Hotel? 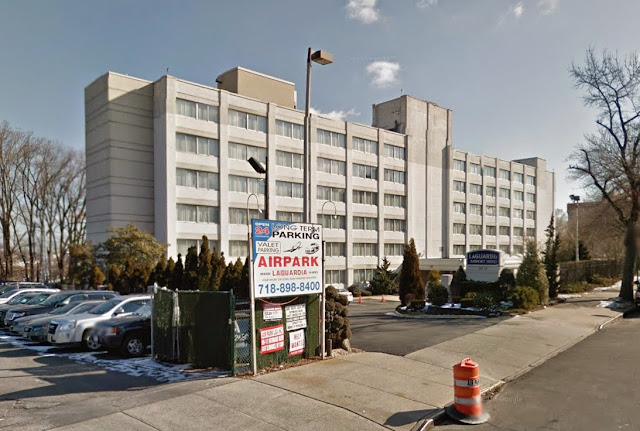 I got some info this weekend from a tipster who has proven accurate in the past. Connect the dots, if you will.

In February 2014, STW LaGuardia LLC, located at the same address as SM Rounders, purchased the LaGuardia Airport Hotel for $20.5M.

In August 2014, STW applied for permits from the DOB to alter the building and change the C of O. Most noteworthy is that
1) they are trying to change the classification from "hotel" to "dormitory" and
2) the icing on the cake -

The plans were rejected by a plan examiner in October, but I'm sure it's only a matter of time before they get their ducks in a row and get approved for what looks very much like it may be an SRO.

The LaGuardia Airport Hotel's website is no longer active. It doesn't even say "coming soon".

Joseph Crowley
Posted by Queens Crapper at 12:55 AM

A perfect location for a homeless shelter! Now the homeless can arrive at LaGuardia from all over the US and take a quick shuttle bus ride to their new home. NYC will even foot their airline ticket. This what you get when only 23% of the voting public come out to vote.

Isn't that a 2 fare zone? That doesn't make sense.

Anon No. 2: Two-fare zones don't exist any longer. It's a free transfer between the buses and subways. Been that way since 1997.

Good for sex offenders, no school nearby.

Let's send our homeless to Virginia so Joe can care for them.
Schools are better there too, that's where his kids attend classes.

This is ridiculous. NYC's guarantee of a bed for any homeless person is out of control. I thought the city was trying to develop the area around LaGuardia, not destroy it? I guess the Vallone family insulted DeBlasio one too many times when he was up and coming.
Here is an idea, lets START at cutting the budget for the homeless by 35% and taking that 35% and using it to help NYC residents with Mental Issues.
Seems that there are a lot of people whom are not NYC residents that are benefiting from our generous City Council. Most of the true homeless that I see have mental issues and this will benefit them as opposed to providing apts. for out of towners while simultaneously reducing the real homeless population and also, doing the right thing.

Joseph Crowley....does he even come to NYC anymore or does he spend all his time at his house out of state? Virginia if I remember correctly.
Who still votes for Joe Crowley? Irish Americans don't have the pull in NYC that they used to.

okay people good morning I walked by the new "Deals" which is on the street level and apartments are above -- the owners could not rent this brand new building for years alot of illegal problems and now they are renting rooms for tourists (lol) which is located at 63-14 Queens Boulevard, now I see two signs from the dept. of buildings that says it is being changed to "Dormitory" so I gather that it will be a homeless shelter too not very good -- and we also have a homeless shelter at the Pan American Hotel and alot of problems - major ones there --

Homeless Shelters are the latest Cash Cow for the politicians. Ever see a Cash Cow?...look in a mirror and say MOO.

Not entirely true. If you pay in coin on the bus, you can only get a transfer to another bus, not the subway.

Which is why you should use a Metro Card.

No wonder homeless numbers in NYC have risen so much -- if you build the shelters, they will come

No surprises. Get used to it, this is the future. NYC will continue to place homeless in "hotels", as the court (and the law) compel it to house these people. Hotels are going up everywhere in eastern Queens as well, and profits can be locked in by filling them with the endless supply of homeless.

Can't we repeal this ridiculous law to house everyone?!?! Please contact your councilmen!! we must put a stop to this!!!

"Dormitory" is the new "Shelter" which was once the "Poor House".

"I live in a dorm" sounds so much better.

Sounds like Dormitory is the new buzz word for Homeless Shelter. There will be one of them in every Queens neighborhood by the time DeBlasio gets voted out. A better idea would be to concentrate these shelters in one place (Roosevelt Island - Welfare Island) where professionals could deal with their issues and lift them out of poverty.

That's great, a George Orwell reference. I would use an American reference, Herman Melville and his work 'Bartleby'.

When asked if they would finally move out and leave the shelter/dormitory, the residents all said 'I would prefer not to'.

Nyc is the country's homeless shelter for legals and illegals alike!! What a sad pathetic city this is!! I was born and raised here but I am not proud of what this shitty has become. ....new York shitty sucks!! So glad I'm moving!!

That's it, By Jove! The Pan-Am Poorhouse.

'A better idea would be to concentrate these shelters in one place (Roosevelt Island - Welfare Island) where professionals could deal with their issues and lift them out of poverty.'

No taxes on 'the rich' or increasing property taxes ever lifted anyone out of poverty. The way out of poverty is stop putting your hand out, get off your a$$ and work. Stop looking for a short cut. These 'poor' with their gold jewelry, their cell phones and video games, their leather coats and $200 sneakers are an embarrasment to the government programs that 'help' them. How does someone get to 300 pounds on food stamps? How on earth does that happen?

You're all far too late. The interior has already been gutted. Conversion will restart in the spring and by fall this will be another shelter.

Who are the elected officials for 63-14 Queens Blvd?

quick question everyone -- how does one find out if a place is going to be a "Homeless Shelter" especially since the apartment building on queens boulevard located at 63-14, Queens Boulevard has signs from the Dept. of Buildings where it states that they are changing over to a "Dormitory" if this is the case I will be going to my counselman Jimmy VanBramer and try to see what is happening -- he will probably tell me he does not know a thing about this -- which is "BS" as usual -- so if anybody can help me on this issue I would be very greatful. Thank you.

Why didn't the people that live there go to the press and start investigating all of this and the city?

Maybe they're offering hourly rates. Get my drift?

Jeffrion Aubry used to work for Claire Shulman. Shulman used to work for Donald Manes. The chain of corruption remains to this day. Calling Jeff will accomplish shit. There are better laxatives to use.