Facility for juvenile delinquents not welcome in S.Ozone Park 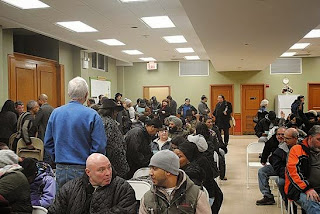 What was billed as a way for South Ozone Park residents to get answers from officials seeking to operate a residence for juvenile delinquents in the community quickly dissolved into more than 100 people shouting with frustration on Tuesday.

“We don’t want it here,” several residents yelled at a meeting of the South Ozone Park Civic Association West. “Put it somewhere else.”

The city Administration for Children’s Services leased a property at 133-23 127 St. to house 18 criminal offenders between the ages of 14 and 17. The program, entitled “Close to Home,” was passed as part of the 2012 state budget and seeks to hold juvenile criminals in residences closer to where they live, rather than in upstate prison facilities.

But several of the residents blasted officials from ACS and the organization that will oversee the teens or youths in the property —Episcopal Social Services — for no prior notice about the new residence, its proximity to two other similar shelters and a lack of answers.

Somehow, this is not surprising.
Posted by Queens Crapper at 12:00 AM

Crappy, you leave out the best part:

“I’m the only elected official here,” [Councilman Ruben Wills] said. “Do not test my commitment to this community.”

As it he forgot it's already under fire. Wills should cool his jets and watch his ass now that Preet is again in attack mode (even though this is Scneiderman's ax).

I think they closed down the group home in bayside because I think it was run by st Vincent or some organization like that. I don't blame them for not wanting to house little delinquents

They should put it next to the Court House or the jail. That way when these recidivists break the law again the transport costs are minimal.

How about next to homes of the zoning board or community board members? That would be a first.

The Italian mob once made its home in Ozone Park.Maybe some of these jDs are their sons. Salute' Crime coming home to roost?

Everyone is for building more jails, just as long as its not in there neighborhood.

Why not build them in greenpoint across from the power plant? the burned out lot would be good, or off kingsland and let them try and escape by jumping in the gowanus canal...would that be so bad?

What we need are jails built specifically for convicted politicians. Lord knows we have had enough of them. What a windfall in $$$$$$$ that would mean for our local economy.

Why don't the used the jail in criminal court on queens blvd. That is not been used. Use it to house all those delinquents

put this place next to Cuomo's house I'm sure he'd love that since he feels so intent on helping these poor little lovely incarcerated angels. after all he's a criminal himself.