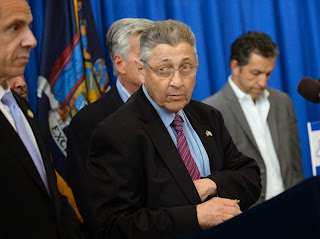 In a move bound to rock the state Capitol, longtime Assembly Speaker Sheldon Silver reportedly will be arrested Thursday on corruption charges.

The arrest of Silver, who has been one of most powerful men in Albany for more than two decades, was reported overnight by The New York Times.

While it’s unclear exactly what charges Silver could be facing, The Times reported they are linked to payments the powerful Manhattan Democrat received from New York City law Goldberg & Iryami that he did not disclose publicly as required by law.

A spokesman for U.S. Attorney Preet Bharara had no comment.

UPDATE: This guy allegedly hid A LOT of money.
Posted by Queens Crapper at 7:42 AM

cuomo jr. must be shitting bricks,cause sheldon shady is going to rat everyone out.hopefully all the luxury tower pestilence in nyc will stop.

get em preet,get em all

Oh! How happy Joe Bruno must be to see this happen!

It's about damn time.

Silver will slip and slide away like the sleaze bag he is.
He probably has enough secret info on many others and will cash in these chits to avoid a messy situation.

The saddest part about this is the fact Silver should have been arrested on similar charges from 15years ago. Anything less than 8-12 years in federal prison will be a travesty of justice.

He should be remanded based on the fact he's a dual citizen, so to be sure he doesn't flee to Israel and the Federales should seize his villa in Haifa,Israel and all his other properties in NYC. All his wealth was acquired via serious felonies.

Cuomo may want to stay in Cuba.

Maybe Moby Stavisky will be getting harpooned next. Say goodby to mamma , Evan.

Let's remember that Governor Cuomo fired the Moreland Commission when it started investigating him.

Hopefully Cuomo is next. No we know why he shut down the Moreland Commission.

The charge is failure to report income.
Don't hold your breath people.

Now we know why Cuomo has been in our face for the past few weeks. Making all of those grandiose announcements about what he is doing to make NY better. Thank you Preet. Go after Cuomo next.

Please connect all of the dots Preet. Please.

I myself am the victim of corruption and cover-up with Governor Cuomo's top administration that requires an honest, complete and thorough investigation against the MTA Office of the Inspector General (State of New York) that involves my NYC pension, and how that agency withheld and concealed critical evidence from the Transit Authority to restore my union job and pension. I have asked Queens Borough President Melinda Katz for help in writing on April 8, 2014 (and her counsel, Alisha Velasquez), and despite repeated calls to her office, no acknowledgement from either BP or counsel to date. More recently, Andrew Cuomo's Director of Transportation, Karen Rae, located in Albany, called me on December 5, 2014, and promised me that she would make contact with MTA Inspector General, Barry Kluger, and promptly call me back on December 10th or 11th. That call never came, and when I called several times to find out what happened, her secretary told me that there was a lot going on for her right now and that she would get back to me. It's now January 22nd, and still now word. This is the world of Queens politics at the borough president level, and at the other end of ignoring a constituent's valid claims like mine is Andrew Cuomo's brainless stonewalling and dereliction of public duty. And that is why voter turnout continues to plummet with apathy that is hopeless. No matter how long or how hard I complain about this critical, long overdue matter, no one is listening. Yet, I keep delivering the message, with the hope that someone will finally wake up from suspended animation within state government's intensely incompetent and dismissive network of apathetic, slimy and dishonest lackeys. Is anyone listening?

Shelly can give up the unions that give brown bag cash to Chuck Schummer
Its not a secret anymore.

Notice how all of a sudden he is wearing his jew hat. He will probably try to play the anti-Semitism card at trial and in the jew press.

I'd settle for him having to step down as Assembly Speaker, if not having to resign from the Assembly. I'll take what I can get.

Sadly, nothing will happen to him. Everything will be covered up and maybe, he'll walk away with a slap on the wrist. He knows too much and has the goods on ALL the crooked politicians. He knows where all the bodies are buried and he knows he's safe.

It looks like there are only two options here. Is Governor Cuomo ignorant of what has been going on, or is he himself tied to it all? More simply put...is he dumb or a crook? Either way this is very big, and the investigation is still open to cover all. I have no doubt about that. This is a federal case, and kudos to all you hard working FBI, etc. "boys and girls" ! Perhaps Silver's senior years will be spent in a federal assisted living facility.

At 74 years of age a 4 year slap on the wrist jail term is sufficient. Brian Mc Laughlin did jail time. Shelly won't get off with doing none. He might cut it by giving up others but if he gives up the wrong ones...uh, uh...better dummy up on the guv's involvement. If this were a state case that's one thing. Shelly might get away with a lot but this one is federal.

Perhaps Silver will share a cell with his old neighbor and brother-in-law Willie Rapfogel.

Preet is onto Cuomo...

And Danny Halloran was supposed to be sentenced yesterday, January 21st, but he got it pushed off to March 6th.

Wanna bet the fat boy is rolling over on everyone?

Either Silver walks or half of the State politicians are going to get picked up as well. Don't be surprised if Silver has an untimely death.

Hey, Gary, if all you got from my message was a chance at replying with apathy and snarky back talk, then you'd be a perfect fit to work for Andrew Cuomo's 'See No Evil, Hear No Evil and Speak No Evil dysfunction in Albany. Better yet, Bill de Blasio would absolutely canonize you if you worked for him--he just called Sheldon Silver a man of great integrity! Good call, man!

Hey, Gary, it's also commendable how you willfully ignore the message, but take time to lampoon the messenger! So, when do you start working for Abhorrent Andy in Albany?

I hope those chickens crap on Guv's Cuomo's head.

we need to start hanging Politicians off of the Queensborough Bridge, right in view of the UN, for the world to see.

And you knew who you were then,
Girls were girls and men were men.
Mister, we could use a man like Sol Weprin all over again!

A fedora is a 'jew hat'? Someone better tell Jim gennaro. Not to mention bogart, grant and Stewart. And every us male from 1925 to 60 or so.

Will Silver get kosher food in jail? Oops...he might wind up getting "porked" instead.

Or they can wear the magic yarmulke, with built-in hair.