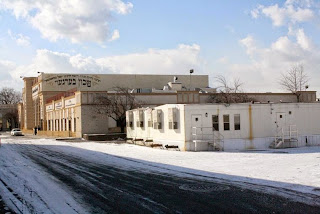 The United Talmudical Seminary at 74-10 88 St. in Glendale has filed an application with the Department of Buildings to construct a four-story, 142,183-square-foot structure containing office space, classrooms and student dormitories on a plot of land adjacent to the facility.

The Brooklyn-based rabbinical school, which opened its Glendale location in 2006 after years of heated opposition from area residents, buses its students in from Williamsburg every day.

The new structure would allow the students to live next to the school, with the busing of students being all but eliminated.

The application has been sent to a plan examiner for analysis. The site is zoned M1-1, a light manufacturing district.

Plans call for the ground floor to contain offices and three classrooms, with the top three floors being set aside for an unannounced number of student dorms.

The Monarch Knitting Machinery Corp. sold the former textile factory to the United Talmudical Seminary for $3.5 million in January 2004, and the DOB shot down plans to build 100 units of housing at the site later that year over zoning regulations.

Hey folks, this is a continuation of one of the earliest stories that was reported on this blog back in 2006. They tried to slip a dorm past DOB and the community back in 2006, and now they are trying to go the legal route, although I don't know if this will pass muster with the zoning. Certain groups in this city seem to always get their way, though, and the city seems hellbent on blockbusting Glendale lately, so be prepared for 1000 students to inundate the quiet manufacturing area and further overtax city services.
Posted by Queens Crapper at 12:31 AM

I saw the man who runs the yeshiva at a Glendale-Middle Village Coalition meeting last year. I do not know if he donated money to fight the proposed homeless shelter or was sizing up the opposition and has other plans for this building after it is built.

Not necessarily. The old yeshivas on Thornton Place and on 69th Avenue and Kessel in Forest Hills haven't promoted any wholesale neighborhood turnover.

Will Glendale turn into Kew Garden Hills? I doubt it.

More Jewish men doing nothing all day while their partners pumps out a million kids and work 12 hours a day!

No one needs to study the torah - just read it once already! Go out and do good instead of talking about it ll the time!

They're going to do it no matter what the City or the community. That's been their Modus operandi since the "Yeshivah" first opened. Use lies to placate the community, then go ahead and do what you said you weren't going to do. The manager of the Yeshivah should resign. If he didn't lie, then his bosses lied to him.

Another thing, They vote as a bloc. Whoever the head rabbi says to vote for that's who they vote for. One reason they always get what they want.

Quiet manufacturing area? Isn't that an oxymoron? I would rather have yeshiva students instead of manufacturing.

No, it's not an oxymoron. The residents and community board stated that the knitting factory there previously was a good neighbor, and manufacturing areas tend to be quiet at night, unlike commercial areas. There have already been sightings of the students now living on campus illegally sneaking out at night and buying booze at a local bodega. Will only get worse if this gets through.

Why are young kids from Williamsburg and Monsey living in a dorm in Glendale? I don't get it. I don't think this is what they claim it is.

The Hasids own all the homeless shelters.

This is so wrong.....I wonder where they get all these Jewish kids. ...isn't there enough Jewish schools in this city for all the Jewish kids? Is this possibly a plan to house students who come directly from Israel perhaps ? Are we looking at more student visas in this city?


These are Satmar hasidim, the folks who exemplify bloc voting. Not sure how they transform neighborhoods from tranquil to overcrowded? Google search Kiryas Joel and Bloomingburg.

Don't worry, Melinda will push this through, no questions asked!

It's a Hassidic slow-motion relocation - sell the most valuable properties in Williamsburg and buy industrial properties in Glendale at bargain prices.

Any truth to the rumors that the Satmar are buying into residential East Glendale?

That is way too many rabbinical students in one location, IMO.