Success at the Cinemart 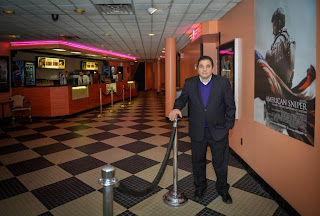 Movie lovers came out in force to support a historic Queens theater on the brink of collapse.

The Cinemart in Forest Hills hosted sell-out crowds for several showings of “American Sniper” and other films on the bill, said owner Nicolas Nicolaou.

The response was strong enough to postpone any short-term plans to close the financially struggling movie house, he said.

“The community wants to send a message that this theater has something special for them and the character that comes with being here for 90 years,” he said.

The public momentum spread to nearby eateries along Metropolitan Ave., including Eddie’s Sweet Shop, which had a brisk business all weekend, he said.

Nicolaou plans to meet with movie executives in Los Angeles and show them the theater should be a venue for first-run films.

The question is: will they keep coming?
Posted by Queens Crapper at 12:47 AM

I was at the noon showing,i parked 2 blocks away. Small and mellow,perfect
American Sniper was excellent,and our trip to Eddie's was.......sweet!

after the oscars are done,there will be nothing but cartoon sequels,marvel and dc comic movies,romcom and other dreck that the majority of residents in that area don't like(I assume forest hills and kew gardens)

didn't get to see The Hobbit in theaters, but i am looking to take one of my kids to the upcoming avengers movie and i was going to do it on IMAX

Oh, no! I love that place. So low-key and old-timey. Damn! I used to live within walking distance and went fairly often.

I've always found the Cinemart good for catching the 2nd run, if there was something I missed at the Midway or Kew Gardens. And if the movie ran for less than 2 hours, as the seats are not very comfortable there, and the sound wasn't too good. Need to visit there again to see how good the "upgrades" are. I live closer to the Main St, but that one is almost hopeless- there, my tolerance level is about 90 minutes.

A fair number of people including myself go to Cinemart to see shows that are no longer airing at Regal Cinemas, AMC or other big chains. The added benefit is the cost is a bit less, too. However, the bigger issue is that Hollywood is abandoning celluloid film, which means new projectors must be 100% digital, which is a big investment for a small theater like this. The movies are sent on portable hard drives sent to the theaters. As I understand it, the new equipment costs around $30,000. NPR had an interesting story about the digital migration, see http://n.pr/1J3UJgl which aired just about a year ago.

A temporary stay of execution unless the communityi continues its support. A one time turn out does not amount to squat in the long run. Movies will be "just a passing fancy" as time goes by. Streaming is the future . Heating and cooling a bricks and mortar local theater are increasing each year. Anyone want to pay $30 admission in ten years?