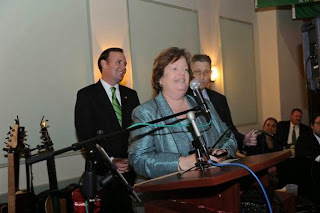 Top officials with the Queens Democratic Party are calling Assembly members in Queens, Manhattan and Nassau County about the possibility of supporting Assemblywoman Catherine Nolan, a Queens Democrat, for speaker if Mr. Silver resigns or is forced out of office after his arrest on federal corruption charges, sources say.

“Queens is calling around, taking the temperature. They’re pushing Nolan,” said an Albany Democratic source. “They are floating her in case Shelly is no longer speaker so there’s a quick transfer of power and the body can move on.”

Sources say the Queens machine’s three top deputies–Michael Reich, Frank Bolz and Gerard Sweeney–are calling legislators to figure out what kind of support exists for a potential Nolan candidacy. Ms. Nolan, who did not immediately return a request for comment, defended Mr. Silver in the Daily News.

“They feel he’s taken a lot of criticisms for reflecting the views of a hundred very disparate people,” Ms. Nolan said. “It’s not an easy thing to do and he has done it very well.”
Posted by Queens Crapper at 12:35 AM

Female politicians have ruined Queens. So yes, let's elevate one more. They're fine from elsewhere, but Queens from Queens should never be given power.

Never heard of her. Shed probably be made a puppet anyway.

"They feel he’s taken a lot of criticisms for reflecting the views of a hundred very disparate people,” Ms. Nolan said. “It’s not an easy thing to do and he has done it very well.”

as for the following comment,preet also acknowledged how cunning his scheme was.

no one can be trusted,just leave the job vacant.

Doesn't Reich live in Nassau county? So why is he running the Queens Democratic machine? Maybe it's because he can shit all over our borough and not have to step into any turds he might have otherwise left in his own backyard.

Let us not be sexist here. Male or female...many Queens pols have been the benchmark for corruption.

P.S.
The only way to keep Albany clean is to impose term limits on everyone. This way term limited council members cannot run upstate to hide in their spider holes...milking us dry... while they continue to advance their political careers. Term limits for every political office in the USA guarantees flushing any polluted stream clean.

I agree "Term Limits" for everyone !

"Government's first duty is to protect the people, not run their lives."
Ronald Reagan

I thought that New York State was run by three men in a room.

Scam artist in the pocket of the slumlords. hates tenants. time to vote her out.

Not that there's anything wrong with that!!!

If fat is OK for Christie it's OK for Nolan.

Unless women have a protective status.

Ms. Nolan, who did not immediately return a request for comment, defended Mr. Silver in the Daily News.

“They feel he’s taken a lot of criticisms for reflecting the views of a hundred very disparate people,” Ms. Nolan said. “It’s not an easy thing to do and he has done it very well.”
-----
Just STFUp you nitwit!

Everyone winces when we think that this woman is head of the Queens delegation in Albany, and its pretty bad that she can breezily get elected time and again as she ignores her constituents (I really can't think of much she has done in THIRTY YEARS in Albany), but here she is: finally doing something ...

.. and all she does is to talk senseless nonsense as she embarrasses everyone (including herself) by defending Silver.

No one is defending this man, but good old Queens, when the Titanic is going down, is still trying to organize deck games for the next day.

That they are trotting this woman out to make a fool out of her, and by extension, us, speaks volumes about what the political insiders think of the voters of Queens.

The bitch is they are probably correct.

A few years back a local group made some comments to the press where the opinion was expressed that there was a lot of room for improvement in western Queens politics.

She got hold of everyone's name and spent the afternoon calling each person to throw boilerplate stump speech on how much she has supported each of us for many years.

It was amusing as it was pathetic. She sounded like a frantic buffoon.

For many of us, it was the first (and last) time we ever spoke to her on the phone.

Nolan is an empty suit created by the machine and like most politicians, totally in over her head without their support.

She reads from a script the boys give her.

She and her office are idiots and are no help to constituents. Every time I have a problem or question , they say they will get back to me but they never do!

Nolan isn't a puppet. Once in a while she bucks the bosses. In the 2012 Congressional primary, she endorsed Rory Lancman over Grace Meng.

Nolan isn't a puppet. Once in a while she bucks the bosses....