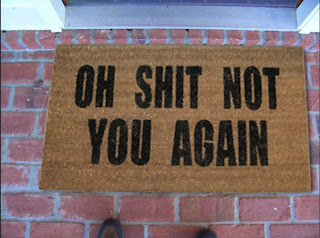 A little over a year after she lost New York's Democratic mayoral primary, Christine Quinn is working in politics again. Governor Andrew Cuomo has hired the former City Council speaker as a special adviser, and she appeared with him on Saturday at NYU for an announcement about preventing sexual assault on college campuses. While some see Quinn's hiring as a jab at Mayor Bill de Blasio (though he and the governor are ostensibly friends), her formal rival was cordial. "The mayor welcomes Christine back to public service," said de Blasio spokesman Wiley Norvell.
Posted by Queens Crapper at 12:07 AM

Like Vallone Jr in Albany and Katz going apeshit over giving Comrie a new lease on life.

Ah, for the days of Giff Miller.

New York has a long history of inbred politics. Won't any of these people get a real job and stop suckling at the public teat?

The mighty Quinn....bull dyke of politics.

Forget about Quinn and others like her who are hiding out in Albany. Think locally. It's the voters who have the power to nip their council members, etc. , in the bud before they grow up and become stink weeds like...uh..."stinky" Paul Vallone.

All on the struggling tax payer's dime!

When I heard her whiney voice on the radio, I had a dry heave...

But the amazing thing is how the public which goes apeshit over TV shows, shoes, sports and food just accepts something that harms them in the every detail from pocketbook to their families to their homes.

Makes no damn sense at all....

Quinn is a professional brownnose lapdog,she should fit nicely with the other skells in Albany

But the amazing thing is how the public which goes apeshit over TV shows, shoes, sports and food just accepts something that harms them in the every detail from pocketbook to their families to their homes.

Panem et circenses. What else is new?

This is the best title of a post ever.

She is the epitome of public welfare--and an intensely incompetent political hack whose tainted connections to Michael Bloomberg (and back room deals) no longer provide her with any pull. So, along comes job weaver Andrew Cuomo to create yet another cushy job of zero accomplishment that bleeds all taxpayers to involuntarily indulge his extremely bad judgment, and audacious whimsy--and the public be damned--again, still and forever!

Doesn't political hack Christine Quinn know how to apply for a real job in private industry, instead of her continual, brazen reliance on the City and State of New York for cushy, easy jobs of favoritism and cronyism? She would be the last person whom I would ever trust in any purported position of public service, given her disgraceful record as former council speaker, where she abrogated every voter's rights by lawlessly approving a third term for her pal, Mike Bloomberg (to name but one of too many egregious transgressions that betrayed public trust). Instead of being hired for anything in government service, she should be banished from a lifetime of public service. Now, a year after vacationing at Harvard's Institute of Politics, and she is back in business as usual, squeezing her squat, hefty rump through the dark and narrow corridors of Albany, where it is now job weaver Andrew Cuomo's turn to reward yet another failed and worthless politician, into his stable of specially invented positions of private splendor (in addition to Peter Vallone, Jr., and Floyd Flake). And once again (as always), it is the little people's tax dollars involuntarily robbed by this totally shady and corrupt governor, whose indulgence to oblige Quinn's shamefully intense incompetence, and audacious whimsy, is an unconscionable, flagrant abuse of power, and the public be damned--again, still and forever! All of New York State's government is a corrupt and dishonest racket that is rigged for monstrous failure! And this is the governor's shining example of transparency?

Wilhelm loves lesbians, why not Quinn?

Anthony Weiner is next.

New York City and State government is the biggest raw sewage plant for worthless, false, fake and failed politicians like Christine Quinn, Peter Vallone, Jr., and the very intensely fake Floyd Flake (not to mention a pious fraud). But, in the exalted Albany towers of privilege, private splendor and unjust enrichment, all are welcome with staggering credibility and purpose--and the taxpaying public be damned. This is a flagrant abuse of taxation without representation that continues to get worse by the hour. This is crime that I attribute to systemic greed and failure from the top down--where I hold Andrew Cuomo responsible for levels of corruption that are so entrenched, that the henchmen from Albany no longer care that they are destroying healthy commerce, middle class stability and better standards of living that can not possibly survive under such crushing corruption. Men have been hanged for far less!

Why the surprise? Where did you expect her and her "wife" to go-- to Nebraska to take up farming? These people are locked into lucrative "public" jobs for the rest of their lives. She'll be around for 30 more years.

That neither absolves or expiates Christine Quinn or Andrew Cuomo from abusing their authority, by privately arranging a job for anyone whose sole purpose for working in public service is cronyism, nepotism, favoritism and any other improper considerations for work that is funded by taxpayers statewide. Andrew Cuomo keeps talking (and talking, without actions and accountability), about ethics, transparency and reform that obscene conduct like this completely betrays. A long overdue arrest by US Attorney Preet Bharara appears to be the only effective reform for all taxpayers of New York State that have been at the derelict mercy of taxation without representation. This is not leadership, Governor Cuomo--it's criminal misconduct and systemic corruption--and I am sick to death of getting bullied into submission with hot, heaping piles of bullshit like this, so that you and your dishonest henchmen, hangers on and sycophants can live better than all of your constituents combined! It's sinfully negligent, and brazenly pathological and treasonous--beyond reason and sanity!

As a "special adviser", what is she going to advise him on?

Quinn has got a "black book" on everyone. That is how she got her spot., Information is power? She has probably blown enough of her share of pols to vie for the #1 spot with Melinda Katz.

These are unconscionable and flagrant abuses of power that creates systemic distrust by voters like me. Where are the prosecutors and the courts to restore honest, ethical leadership (that leads by example)? Unbelievably, they are not to be found in this state, or anywhere else. Corruption not only destroys the innocent lives of others, but it also delays and taints the process of good commerce and businesses that rely on democracy and civics that work to prevail in a law abiding society, versus the New York realities of fear, paralysis, cronyism, nepotism,favoritism, preferential treatment, lawlessness and police state rule that is buttressed by elitism--not egalitarianism). These involuntary and not consented to policies (by public referendum) reinforce the very draconian premise of neo-fascism, and it totally nullifies freedom and democracy to a void and useless facade of dishonest Capitalism at its most insidious, destructive and counterproductive. Where is the press to impart serious, journalistic integrity that doesn't betray public trust? Nowhere to be found, sadly, as they are just as bought and paid for as the corrupt politicians who control the purse strings of every systemic cover-up, kickback, payoff and filthy dealings that just keep getting filthier by the hour. Only impeachment (by example), and public protest, rally, resistance and activism will restore law, order and integrity to a deeply entrenched and corrupt system in Albany and City Hall--and every money draining political system in between!