LaGuardia getting an AirTrain? 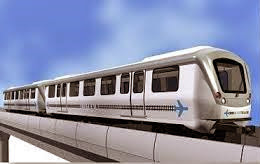 The plan calls for a 1.5-mile tram that runs along the Grand Central Parkway from the Willets Point 7 train and LIRR stations, Cuomo said.

"We just are in the initial planning phases of it," Cuomo said.

But then he said something which makes me wonder if he got the memo:

...the governor said he didn't think the project would face major problems because Willets Point is industrial and therefore not prone to "siting issues" that arise in residential neighborhoods, he said.

"It runs basically along the Grand Central Parkway. It's basically an industrial area. You're not talking about neighborhoods, etc," he said.

So does he not realize that there is a megadevelopment planned for Willets Point, or does he just think that it won't be happening any time soon?
Posted by Queens Crapper at 11:35 AM

I'm not a railroad engineer or an urban planner but this rail idea sounds dumb.

Why can't the MTA run a train to the plane from Penn station through the Sunnyside yards and then along the rails that feed the Hell Gate bridge and build an elevated line along the Grand Central from where the existing Hell Gate rails cross the parkway? Yes it will require some engineering but it isn't rocket science.

It would be much more direct and probably cheaper than what Cuomo is proposing.

The bold idea would be rail to Sunnyside yards and from there connections to 7-Q-N-E-M-R, MNRR/Amtrak (over Hellgate), GCT, and have the LGA spur itself continue to Pennsylvania Station.

With this announcement and the plan to expand LGA, I believe that eventually LGA will be able to accomodate all international flights...meaning also landings and takeoffs on a 24-hour basis.

"LGA will be able to accomodate all international flights..."

LaGuardia runways are too short for International flights.

With the "Hellgate" idea trains could also hook up to La Guardia from Westchester and Connecticut.

But that ain't gonna happen because it makes too much sense and our governor is running low on the "sense" commodity.

Few people are going to LGA from Penn, why run a train from there? No room during peak to either Manhattan terminal after LIRR's ESA and MNR's PSA by the way.

Then again the largest market is the upper east side, and this airtrain misses them completely too.

No reason for the train to go near the planned housing, so that shouldn't be an issue.

Airport lines are a waste of money. If the airlines want to pay for it with a PFC, fine. But not a dime of city, state, mta, or PA money should go into it.

The Wilpons know they're losing the team. Mark my words, that mall will be a hotel served by the airtrain. For five years. Then it will become the largest homeless shelter in the city. The Wilpons don't care, they'll have lost the team by then. It's their last big fuck you to Queens.

"The Wilpons know they're losing the team."

Take a look at the starting pitching for this year. The team will get better, a cyclical guarantee, and when they climb in the standings the Wilpon's will sell for a fortune and they'll keep the hotels, apartments and mall.

Remember: This is a real estate venture disguised as a baseball team.

Remind me again who is going to pay for this? How about a tax on the airport/airlines/terminals/airport service industry? Enough of the homeowners paying for everything!

Today's Millenials will be collecting what is left of social security before this program is done, years behind and billions over budget with politicians and union leaders pocketing hundreds of thousands.

DUMB IDEA! What's the point of having to take the 7 train or LIRR and then have to transfer to another train to the airport? We need a direct one seat ride between Manhattan and LGA!

When's he travelling to Cuba?

Please have Mr. Cuomo look at a map so he can see where LGA sits in relation to Willets. Duh.

Sunnyside Yards and the track over the Hellgate are owned by Amtrak. That is my guess as to why this train would go in the other direction to hookup with MTA lines.

Maybe they think that long islanders will take 2 trains to get the air train instead of using long island mac arthur airport............

the one that runs on van wyck is rarely used.and the roads on that expressway are still filled with cracks and potholes,the service roads are even worse.

cuomo jr. is an idiot,but like the idiots in city hall they are more concerned with keeping tourists and transients happy than everyday commuters who can use new tracks on the subway and smoother roads for bus rides.

This story led off the evening news on Wednesday like it was a done deal.

I guess the newsroom feels they have cover speeches like this to stay on Andy's good list.

No one pointed out that the proposed train goes east.